December 'Out of the Blue' cel.. 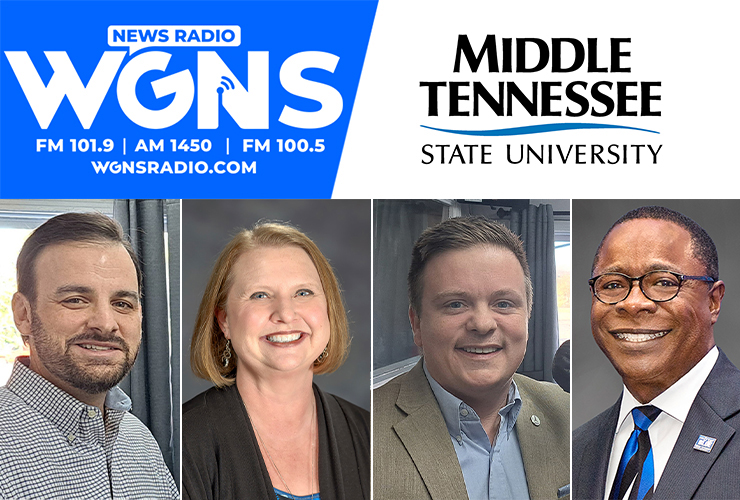 MTSU faculty appeared on WGNS Radio recently to talk about social media research, domestic and international politics, and the ins and outs of a career in professional songwriting. Meanwhile, MTSU President Sidney A. McPhee appeared separately on another program to discuss a variety of issues related to the university.

The three faculty members appeared on the live “Action Line” program with host Scott Walker broadcast on FM 100.5, 101.9 and AM 1450 from the WGNS studio in downtown Murfreesboro. If you missed it, you can listen to a podcast of the Nov. 21 program.

Housed in the School of Journalism and Strategic Media, this innovative lab empowers students with hands-on access to platforms used by leading brands including Unilever, Delta, Nestle, and GSK. Students can collaborate with their peers and faculty members on research and professional projects that will prepare them for careers in Nashville and beyond.

• Dr. Amy Atchison, professor and new chair of the Department of Political Science and International Relations, who discussed her background and new role as chair, her departments academic offerings, the midterm election results and women in U.S. and international politics.

Atchison assumed her new role this semester after serving on the faculty at Valparaiso University in Indiana. Raised in a military family, Atchison earned her bachelor’s from Jacksonville State University in Alabama, her master’s from Florida State University and her doctorate from the University of Tennessee, Knoxville.

The highly polarized political atmosphere in the U.S. continues after the surprising national midterm elections in which the Democratic Party defied historical odds to hold the Senate and lost far fewer House seats than many experts predicted. Meanwhile, while women continue to make strides in winning political office at the federal level, the atmosphere remains dominated by men despite women being half or better of the population.

• Dr. Jamie Teachenor, adjunct songwriting professor in the Department of Recording Industry, who discussed his new role in the MTSU Commercial Songwriting Program and his creation of the new U.S. Space Force official song.

The U.S. Space Force, the newest military branch established in 2019 as a part of the U.S. Air Force, has its own anthem, “Semper Supra,” written Teachenor. The song was named after the Space Force motto, which is Latin for “Always Above.”

Teachenor, an award-winning singer, songwriter and producer who has written songs, and recorded with many country artists including Blake Shelton, Luke Bryan and Trisha Yearwood, said it took a lot of research and revisions to make sure the song was ready for release. A veteran himself and prior member of the U.S. Air Force band at the Air Force Academy, Teachenor worked with Chief of Space Operations Gen. John “Jay” Raymond to begin the songwriting process when the Space Force was formed in 2019.

• Meanwhile, MTSU President Sidney A. McPhee appeared on Dec. 1 “The Roundtable” program hosted by Bill Kraus to discuss a variety of topics, ranging from the university’s impact on the Midstate community’s quality of life to alumni accomplishments to the challenges facing NCAA athletics programs.

MTSU is the No. 1 producer of graduates for the Greater Nashville economy; the top destination for transfer students in Tennessee; and home to the Charlie and Hazel Daniels Veterans and Military Family Center, the largest academic support center of its kind in the state. For the last four years, the university has been named among the nation’s top 385-plus colleges and universities by the Princeton Review.