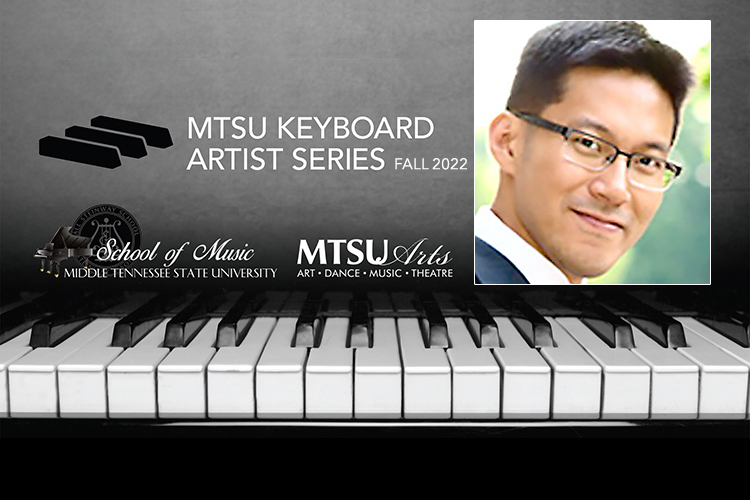 The MTSU School of Music is continuing celebrating its 20th year as the first all-Steinway school in Tennessee by welcoming acclaimed pianist and educator Sun Min Kim on Tuesday, Nov. 8, for a free public concert in its popular “Keyboard Artist Series.”

Kim’s performance will begin at 7:30 p.m. Nov. 8 in Hinton Hall inside the Wright Music Building, 1439 Faulkinberry Drive. A campus map is available at https://bit.ly/MTSUParking.

MTSU’s School of Music became one of only 140-plus “All-Steinway Schools” in the world — and the first in Tennessee — in 2002, boasting 60 of the renowned instruments for student, faculty and guest performer use in its performance spaces, teaching studios and music classrooms.

The piano concert series, now in its sixth season, features MTSU faculty and distinguished guest artists from around the world.

Guest performer Kim serves as coordinator of keyboard studies and assistant professor of music at Denison University in Granville, Ohio. A native of South Korea, he made his debut at age 13 with the Ulsan Symphony Orchestra, performing Grieg’s Piano Concerto.

In 2008, the professional music fraternity Mu Phi Epsilon presented Kim with the Sterling Achievement Award, the organization’s highest honor for its collegiate members. He has performed at Carnegie Hall’s Weill Recital Hall, Merkin Concert Hall and other prestigious venues across the United States and abroad. Kim received a Doctor of Musical Arts degree in piano performance and literature from the Eastman School of Music at the University of Rochester.

A preview of Kim’s talent, captured during a 2021 recital at Denison, is available below.

For more information on MTSU’s Keyboard Artist Series, visit www.mtsu.edu/music/keyboardseries.php. For details on other School of Music events, call 615-898-2493 or visit the  “Concert Calendar” link.