MTSU Theatre’s ‘Kiss Me, Kate’ has a big comedic smooch for audiences Oct. 24-27 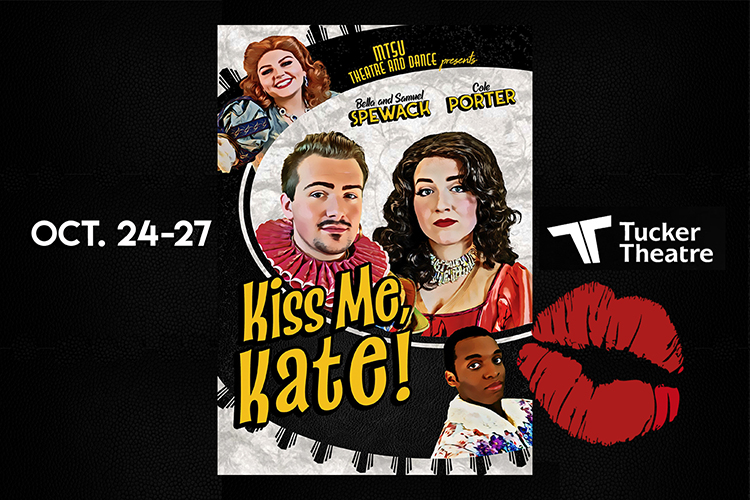 Can we still brush up our Shakespeare and heed Cole Porter’s clever love songs in the era of #MeToo, toxic masculinity and gender politics? MTSU Theatre students say yea, verily, with their new production of the classic Broadway musical “Kiss Me, Kate” in Tucker Theatre Oct. 24-27. 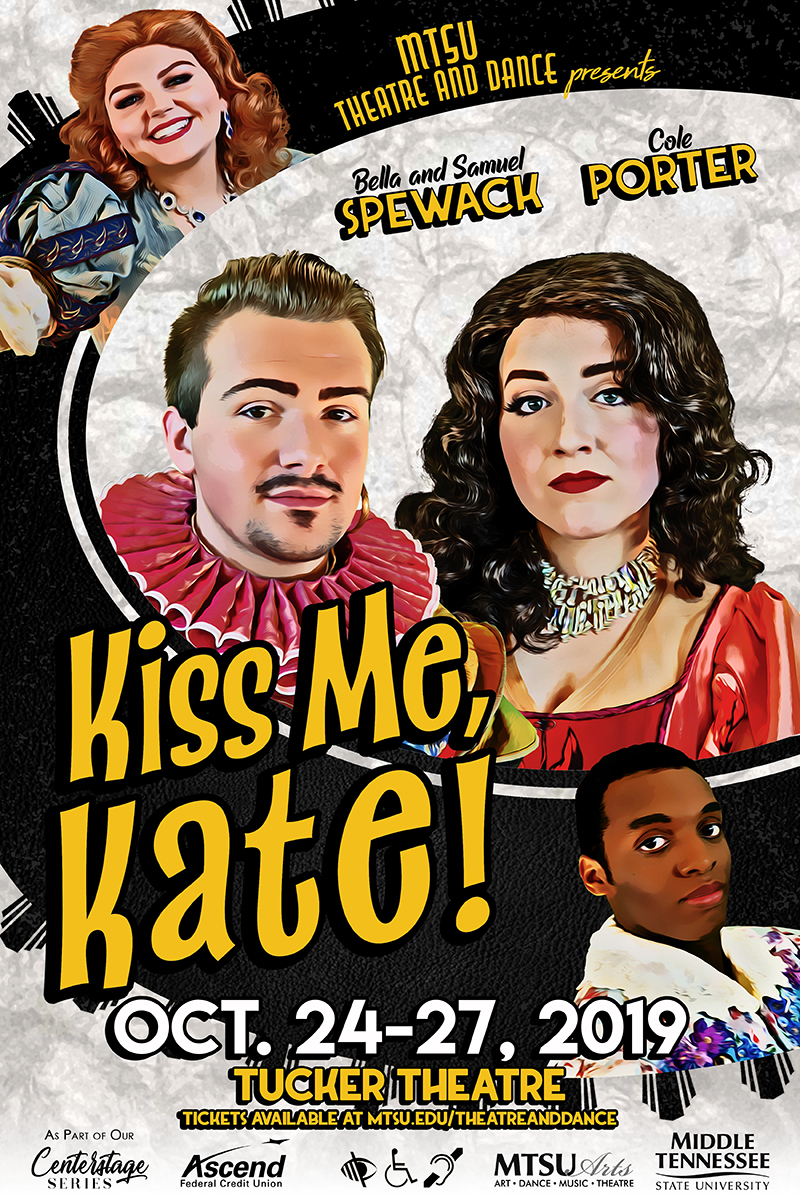 Click on the poster to see the show’s program for the full cast and crew.

Tucker Theatre, located inside MTSU’s Boutwell Dramatic Arts Auditorium at 615 Champion Way, is fully accessible for people with disabilities, including those with hearing, vision and mobility impairments.

“Kiss Me, Kate,” which premiered in 1948 and won the first Tony Award for best musical a year later, is a show within a show, focusing on a divorced couple’s behind-the-scenes antics as they attempt to present a musical adaptation of Shakespeare’s “The Taming of the Shrew.”

Porter wrote the music and lyrics for the show and won his own Tony for it, as did writers Bella and Samuel Spewack. Many of the show’s songs would become American classics, including “Too Darn Hot,” “So in Love,” “Brush Up Your Shakespeare” and “Wunderbar.”

Director and theatre professor Kristi Shamburger, who’s led MTSU’s recent sellout musicals “9 to 5: The Musical,” “Joseph and the Amazing Technicolor Dreamcoat,” “Peter Pan,” “West Side Story” and “Les Misérables” with musical director Raphael Bundage, a professor of vocal performance in MTSU’s School of Music, says the cast and crew have worked hard on this MTSU Arts production, especially at keeping straight faces amid the comic exchanges and wild dance numbers.

“This cast has been delightful!” she says. “The cast is about half returning students and half new students, and it includes Department of Theatre and Dance majors, School of Music majors and more!

“I’m looking forward (on opening night) to having the dances learned, getting our comic timing set, tackling the tap dance in the show and bringing in an audience with which we can share the piece. Rehearsals have just been fun!”

Sophomore Kamryn Boyd of Hendersonville, Tennessee, who’s portraying female lead Lilli Vanessi — who plays “Katherine” in the “Shrew” production — says she’s had to focus on her classical vocal training for this show as well as Shakespearean character development.

That’s been a big change from her preparation for her fall 2018 debut at MTSU in “9 to 5,” but since she’s been performing since she was 8, she knows some behind-the-scenes situations don’t change at all.

“Sometimes things don’t go as scripted. That always creates a great memory,” she says. “During ‘We Open in Venice,’ a wrong line was said while we were dancing, and Kaleb (Stone, who plays Boyd’s “ex-husband,” Fred Graham/Petruchio) said ‘Nope.’

“Even though we kept dancing, we couldn’t sing because we were laughing too much. It was simply the best!”

A complete list of the cast and crew is included in the official program, available here.

“‘Kiss Me, Kate’ … offers an opportunity for reflection on where we were and how far we’ve come as well as some beautiful melodies, funny and physical scenes, clever lyrics, even a bit of tap dancing, and a story of love — love of money, love of career, love of gambling, love of performing and love for another! It’s a show that doesn’t take itself too seriously and a show that we hope will provide a wonderful evening or afternoon of entertainment,” director Shamburger adds.

Tickets also will be available at the Tucker Theatre box office one hour before curtain times. For more information about the show, visit www.mtsu.edu/theatreanddance.