LOUISVILLE, Ky. — Oh, to be in Olivia Porter’s shoes.

The Fort Thomas, Kentucky, resident, a senior at Highlands High School, has tremendous academic qualifications (4.0 GPA and a 32 ACT at one of the top schools in the state) as she approaches decision time for selecting the college she will attend starting in 2020. 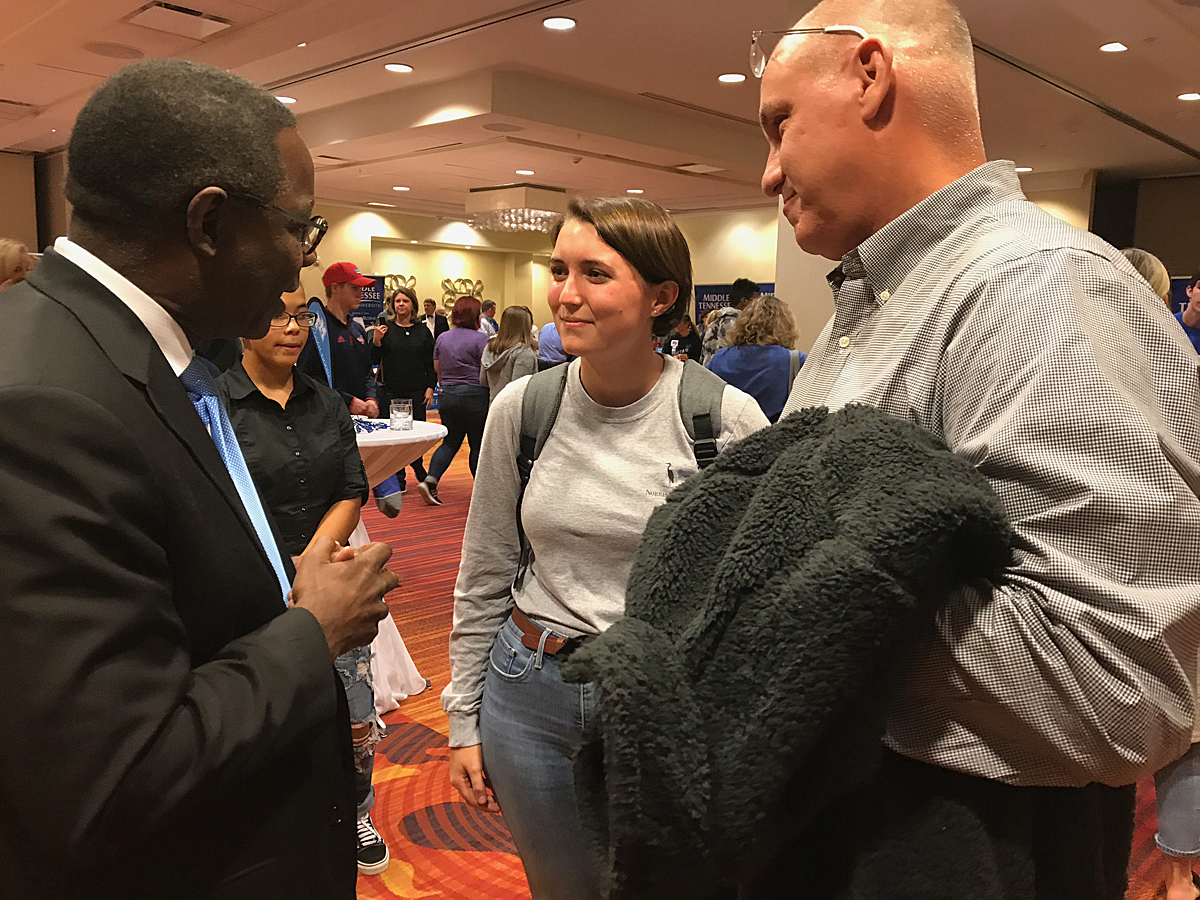 Louisville was the ninth stop on the seven-week tour where MTSU administrators and staff — from university President Sidney A. McPhee to advisers to housing and financial aid personnel — travel across four states to recruit prospective high school and transfer students. McPhee also met students and their families in Bowling Green on Tuesday (Oct. 15). To preregister for events, which are free, visit www.mtsu.edu/rsvp.

Dusty Porter and his 17-year-old daughter traveled two hours and more than 100 miles from northern Kentucky to attend the tour event and learn more about the Murfreesboro university. She received her acceptance letter from MTSU Oct. 14.

Olivia Porter has a strong interest in audio production and MTSU’s program is considered one of the best in the nation. She qualifies for a Trustee Scholarship ($20,000 total or $5,000 per year) and she plans to apply for the Honors College’s Buchanan Fellowship — the highest award at the university. She said she also wants to study abroad.

“Middle Tennessee is one of my top three schools (I am considering) and the only  out-of-state school allowing me half-off tuition,” said Porter,” who heard about MTSU from an alumnus and whose name was drawn for a special MTSU blanket — then McPhee added a $1,000 book scholarship to the mix.

“I really like MTSU and look forward to visiting soon,” Porter said. “The atmosphere here (at the tour event) is wonderful. It’s the first time I’ve met other people who are also interested in audio production.” 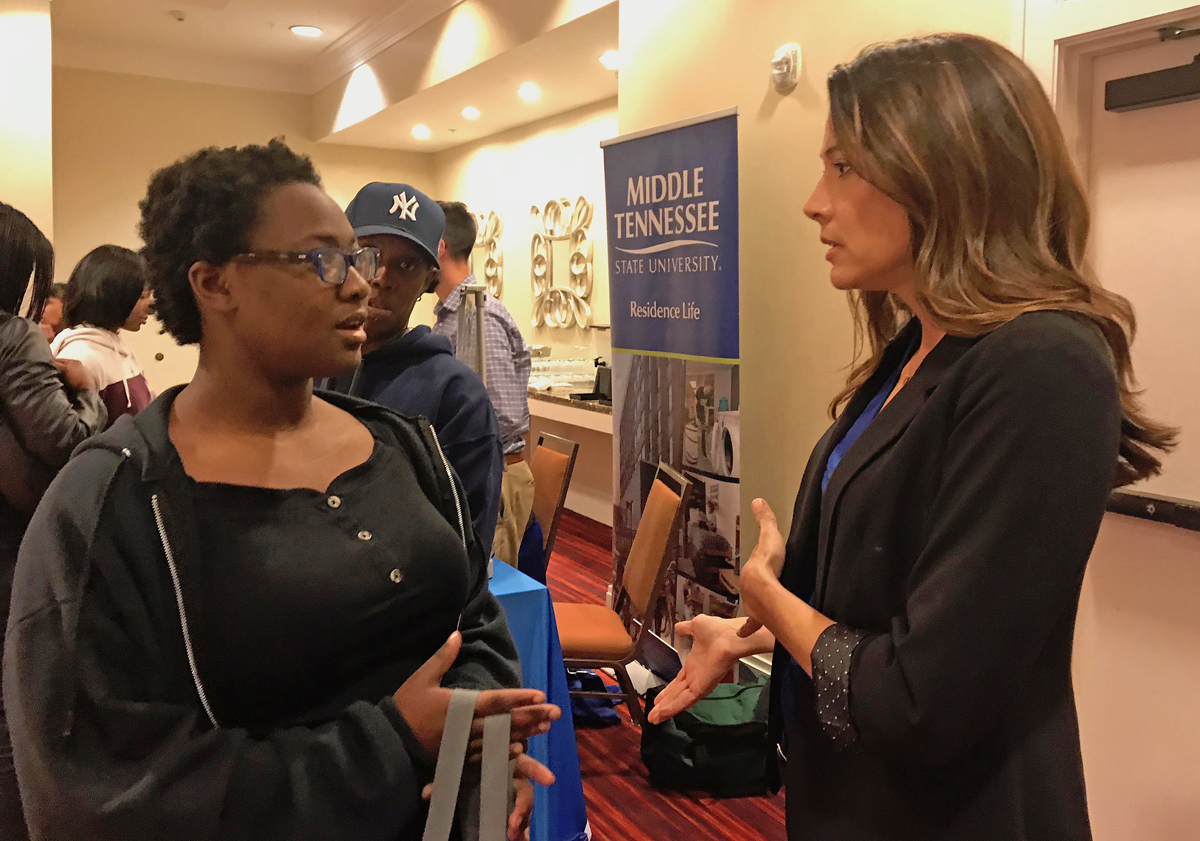 A family that’s all-in for MTSU

DuPont Manual High School counselor Amy Medley is a walking-talking promoter for MTSU, and Christian Academy of Louisville senior/junior sons Jack and Grant Medley are a personal testimony. Jack wants to major in aerospace professional pilot on the Blue Raider campus while Grant plans to join his brother in fall 2021 to study audio engineering.

“MTSU has a quaint, charming campus,” Amy Medley, a 26-year counseling veteran, told the audience. “You can find free tutoring in 200 areas (programs) in the library. Aerospace and audio production are top programs. You will not find services like that at other colleges. … I have tried to poke holes to see if there was anything to be concerned about, but could not find anything. Everything is top-notch.”

Jack Medley, whose 30 ACT and 3.79 qualify him for a Trustee Scholarship, said aerospace’s Diamond DA-40 fleet of training planes “are nice, a good fleet size and a more modern approach (than other schools). The (Murfreesboro) airport is close to campus and the climate is good for flying.” He’d also qualify for the Regional Scholars Program (nearly one-half off tuition) and he said MTSU “offers a good education for a good cost.” 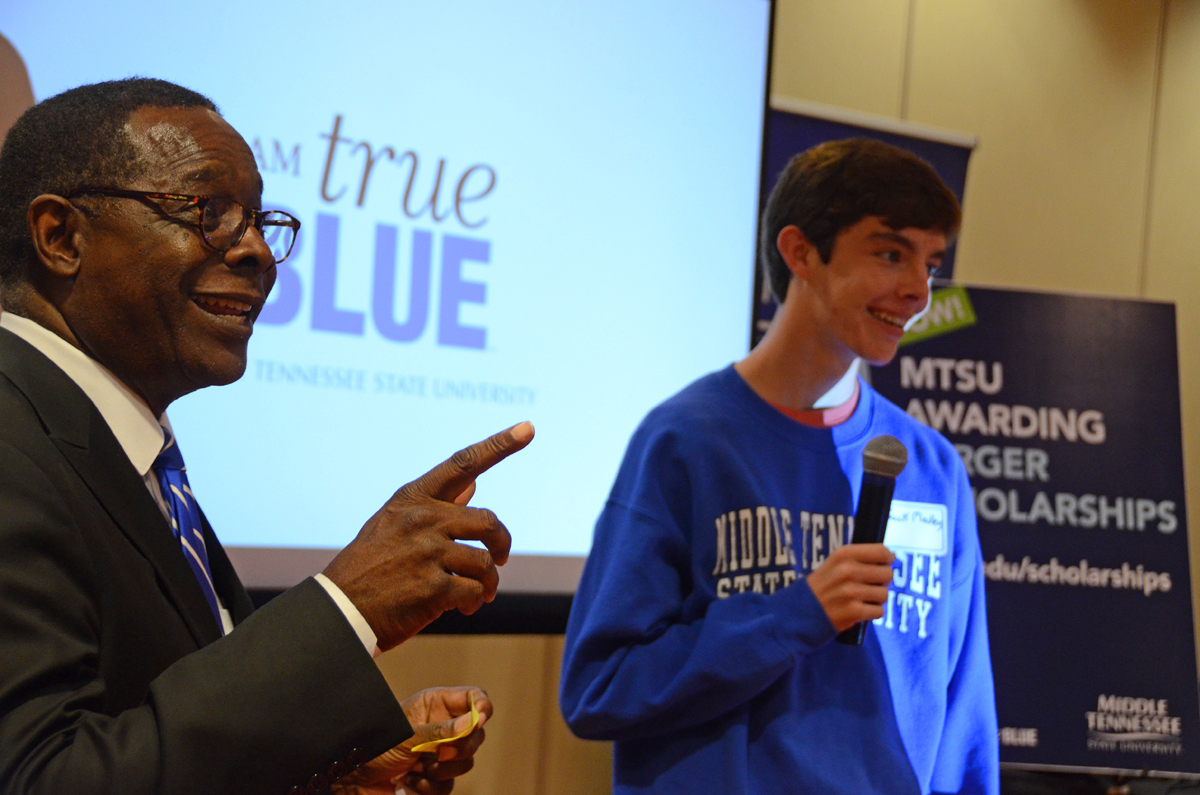 As a high school junior in October 2018, Jack Medley, right, told MTSU True Blue Tour audience members at the Louisville, Ky., True Blue Tour stop things about the Murfreesboro university’s aerospace program that he wanted to be a part of that pleased MTSU President Sidney A. McPhee. (MTSU file photo by Randy Weiler)

• Shea Fleming, 17, a senior at Eastern High School, left the venue with a $7,000 scholarship after her name was drawn by McPhee. She let out a loud scream — obviously excited about the turn of events. She, too, has an interest in the MTSU audio engineering program. “I never imagined she’d be the one (to receive it),” said her father, Paul Fleming.

• Malik Bumphus, 17, a Jeffersontown High School senior, was the recipient of a bookstore gift certificate, then received a $2,000 scholarship from McPhee. “Right now, MTSU is my No. 1 choice,” said Bumphus, who was joined by his mother, Christina Bumphus. He was influenced to attend by MTSU admissions recruiter October Henson, who attended a college fair at his school recently.

• Alumnus Jimmy White (Class of 1997) of Murfreesboro, vice president of the National Alumni Association’s 2019-20 board of directors, joined the tour as he was in Louisville for a business-related conference. College of Education alumna Joni Knight Burke (’75) once again attended both the counselors’ luncheon and student reception.

• For the second time in three years, Kentucky counselors are planning a Nov. 14 bus trip to Murfreesboro, bringing students from Butler, Manual, Male and Pleasure Ridge Park high schools to the MTSU campus for a visit. Jason Cook of PRP, Cynthia Sullivan of Male, Karin McDevitt of Butler and Kevin Gunn, youth services coordinator with Jefferson County Public Schools, began preparing for the trip after the luncheon Wednesday.

On deck for the tour

As a high school junior in October 2018, Jack Medley, right, told MTSU True Blue Tour audience members at the Louisville, Ky., True Blue Tour stop things about the Murfreesboro university’s aerospace program that he wanted to be a part of that pleased MTSU President Sidney A. McPhee. (MTSU file photo by Randy Weiler) 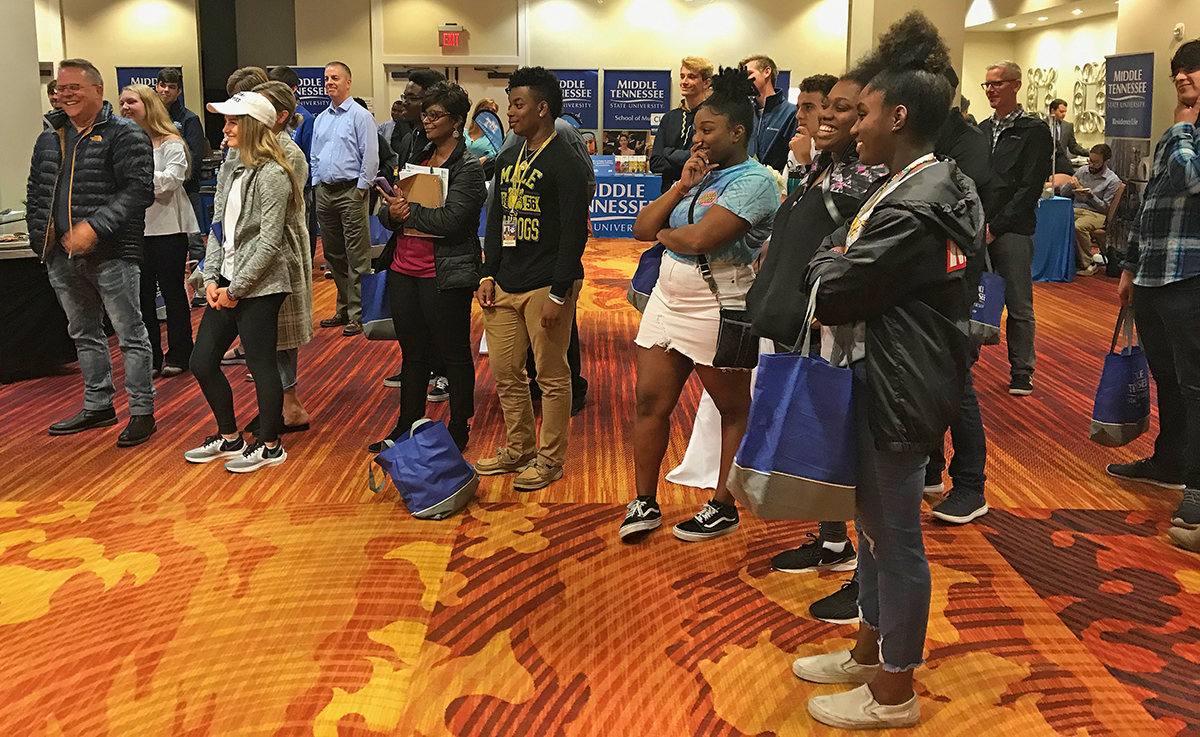