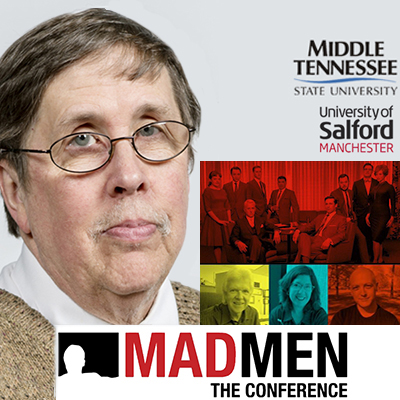 An academic examination of the television series “Mad Men” was the focus of a recent “MTSU On the Record” radio program.

Host Gina Logue’s interview with Dr. David Lavery, a professor of English and one of the coordinators of “Mad Men: The Conference,” first aired May 16 on WMOT-FM (89.5 and www.wmot.org ). You can listen to their conversation below.

The gathering, planned May 26-28, will bring scholars from around the world together to discuss the sociological, historical and literary impact of the program, which aired on the AMC cable channel from 2007 to 2015.

“Mad Men” focused on a Madison Avenue advertising agency in the 1960s, displaying not only the styles of the period but also putting the racism, misogyny and rapacious greed of its characters under a microscope.

“I have taught both undergraduate and graduate classes on ‘Mad Men,’ and, in both of them, what we have tried to do is to set the show in the context of all the other art, literature, film, television of the period,” said Lavery, “and ‘Mad Men’ is especially rich in that regard.”

MTSU is collaborating with Great Britain’s University of Salford in presenting the conference. For more information on the conference, read this story, contact Lavery at david.lavery@mtsu.edu or visit http://madmentheconference.com.