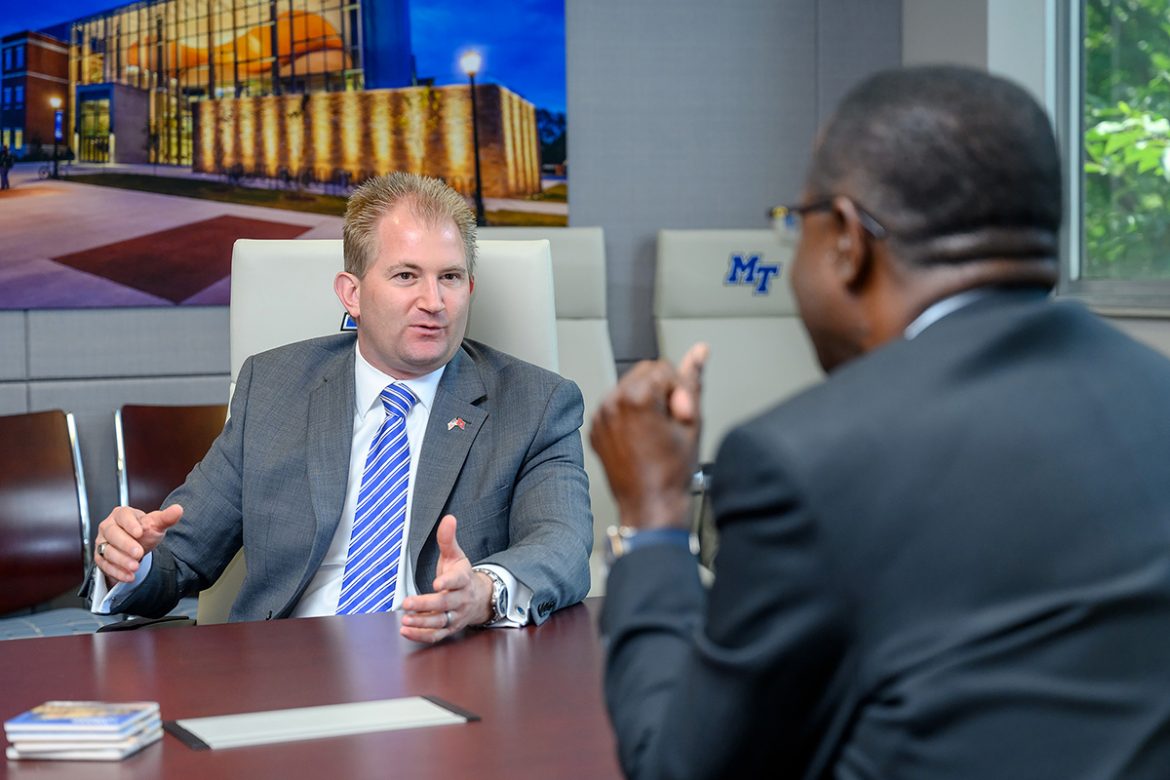 He saw and heard more about the facility, which opened in 2014, and much more during a campus visit led by MTSU President Sidney A. McPhee on Friday, June 25. Lamberth was joined by fellow attorney and state lobbyist Russ Farrar, an MTSU advocate.

Lamberth (R-Portland) asked many questions, shared his interest in the MTSU-Meharry Medical College initiative and community college partnerships and gained insight from information shared by McPhee during his midday visit.

“Obviously, I’m interested in all of our higher education institutions, especially MTSU, in succeeding and doing well,” Lamberth said, adding that the visit “was very impressive.”

“It obviously sounds like you’ve got strong leadership here, you’ve got a great campus — one of the fastest growing in the state — and so I’ve been impressed with the direction the university is taking.” 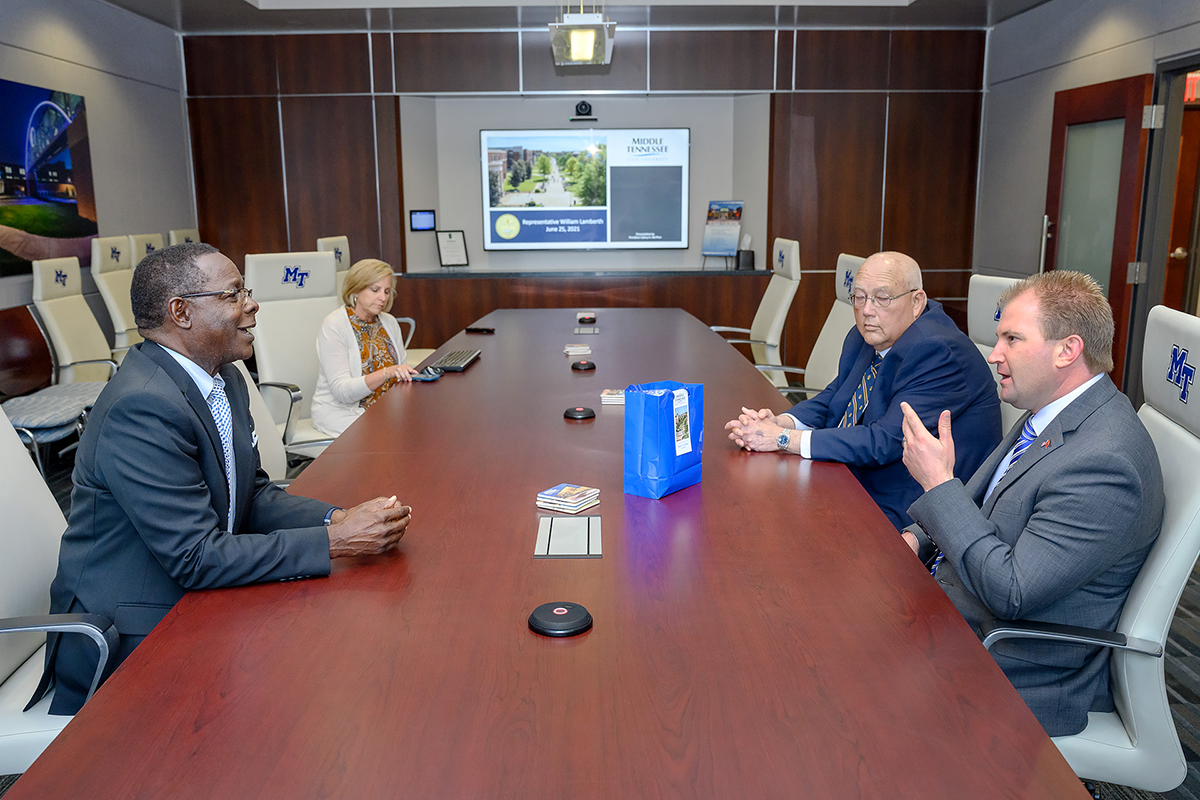 State Rep. William Lamberth, right, the majority leader in the Tennessee House of Representatives and MTSU President Sidney A. McPhee discuss the university’s growth during a meeting in the President’s Conference Room in the Cope Administration Building Friday, June 25. As Executive Assistant Kim Edgar, second from left, and attorney and state lobbyist Russ Farrar listen, McPhee responds to Lamberth’s question on how MTSU graduates can become part of the workforce with Oracle and Amazon. (MTSU photo by J. Intintoli)

McPhee said he appreciates such visits by state lawmakers “because they get an up-close look at the university’s progress and our beautiful campus and, more importantly, how taxpayer dollars are being used to provide a top quality education to the current and future workforce since the vast majority of our graduates remain in the region and state.”

Lamberth noted MTSU has land available for growth and expansion. He and Farrar both said they look forward to returning to the Murfreesboro campus in the future. 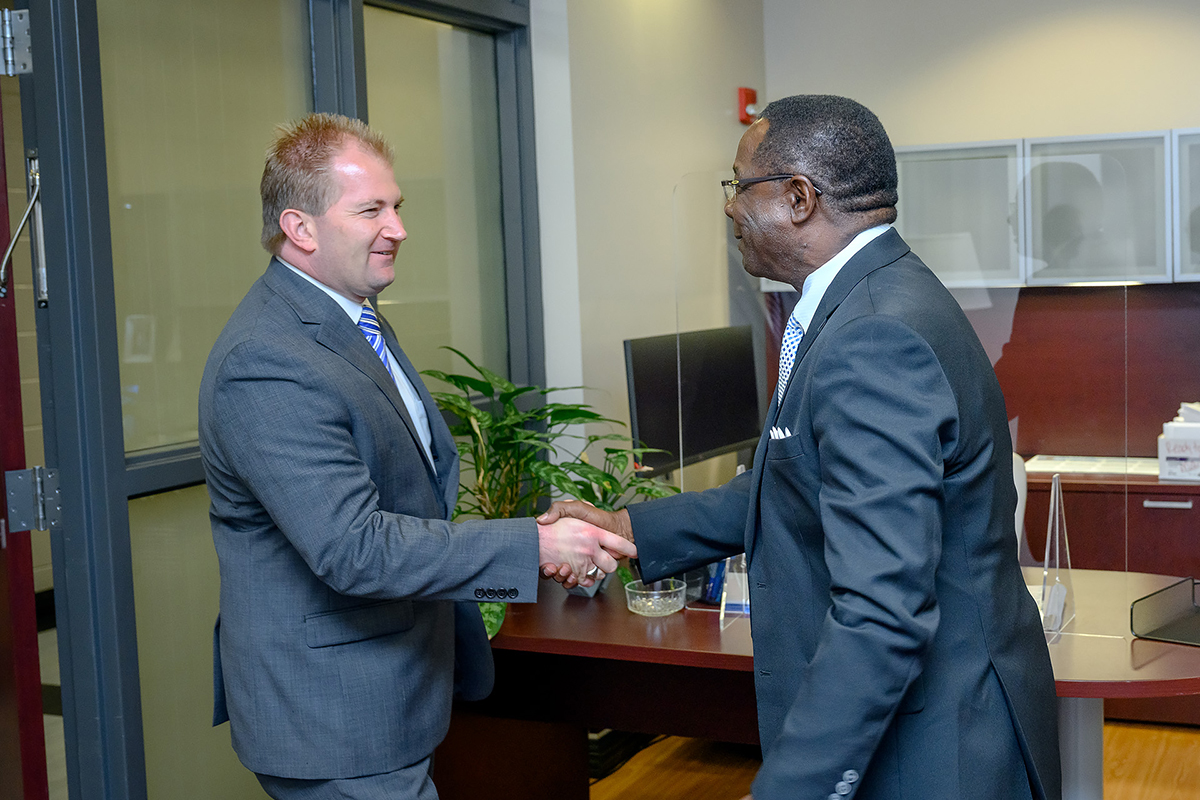 MTSU President Sidney A. McPhee, right, greets William Lamberth (R-Portland) as the majority leader in the Tennessee House of Representatives enters for a meeting Friday, June 25. Lamberth said the meeting “was very impressive.” He added the university “has strong leadership, a great campus and I’ve been impressed with the direction the university is taking.” (MTSU photo by J. Intintoli)