Illusionist and motivational speaker Harris III used a poignant mix of storytelling and head-scratching magic to encourage attendees at this year’s MTSU Leadership Summit to put down the cynicism of today’s culture and rediscover the “childlike wonder” that sees a cardboard box as a castle full of adventure.

Entrepreneur and New York Times best-selling author Josh Linkner followed up with a message driving home the critical importance of “everyday innovation” and the need for today’s leaders to unleash the untapped creative capacity within their teams because “all of us have enormous creative capacity” and “are hard-wired to be creative.”

“Believing is actually seeing,” Harris III told the audience. “Sometimes you have to believe in something before you can see it. … Your belief system is what permits you to see things that you haven’t seen before.” 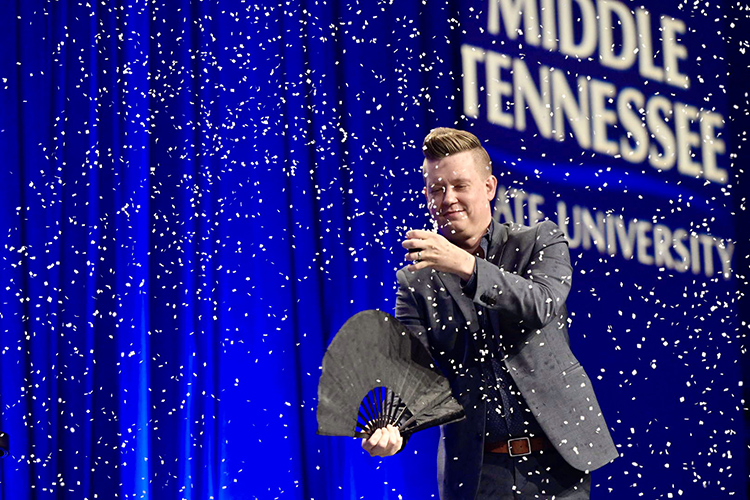 MTSU student Jamie Allen, a junior marketing major from Smyrna, Tennessee, was among dozens of students who joined faculty, staff and community members inside the Student Union Ballroom for the 2½-hour luncheon session hosted by the Jennings A. Jones College of Business. She left inspired.

“I was hoping to get some inspiration from the presentation and just to learn more leadership skills so that I can be effective when I’m in the workplace one day after I graduate,” said Allen, who called Harris III’s presentation “so amazing.”

“What I took away is, put wonder into everything you do, even if it’s just a simple task. It may not be super exciting, but try to put wonder into it and kind of create that ‘wow effect’ for everyone, not just for yourself but for dr. everyone around you, and you’ll see great results.”

David Urban, dean of the Jones College, told the crowd that the conference goal is to develop today’s and tomorrow’s leaders. He pointed out that of the MTSU business college’s 23,000 living alumni, 80 percent live and work in Middle Tennessee and thus contribute greatly to the ongoing economic development successes throughout the Midstate. 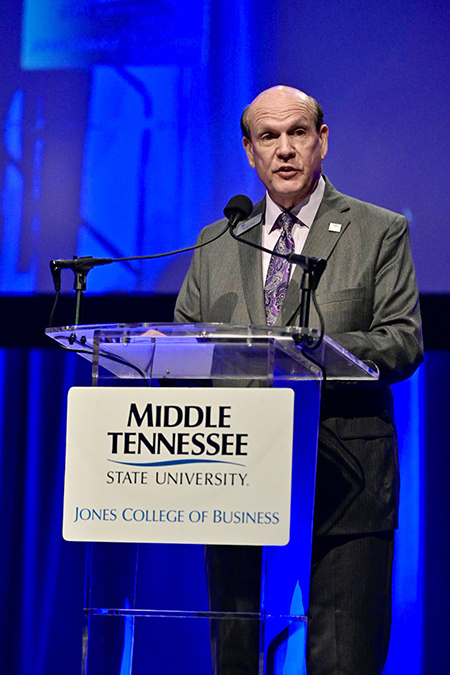 “Our goals have been, and continue to be, national prominence and regional dominance,” he said.

Linkner offered attendees a variety of insights about harnessing innovation and how to avoid falling into the traps of bureaucracy that can stifle creativity. He also warned about becoming so “intoxicated” with a measure of success that you fail to adapt to a changing market or situation.

“Everyday innovation is practicing the act of greater thought on a daily basis,” said the Michigan native, who is also an accomplished jazz guitarist and was recognized as a Champion of Change during the Obama administration.

“How you run your Monday morning team meeting? How you engage with a client? How you hire new talent? So in this context, all of us, regardless of where we sit on an org chart, can be innovative. … All of us can be creative in our own way,” Linkner said.

Harris III shared hard life lessons he learned early in his illusionist career — becoming a millionaire at age 21, only to squander his success through poor financial choices and quickly going bankrupt by 22. Twenty years, 40 countries, millions of fans and a thriving family later, the Nashville resident said he’s discovered that “not all of the stories we tell ourselves are true.”

“What are the stories that we’re actually telling ourselves about what’s possible?” he continued. 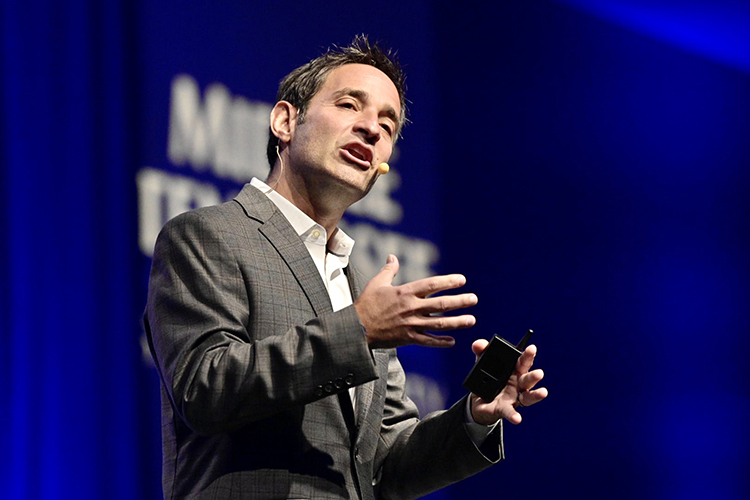 Harris III then drew oohs and aahs from the crowd with a table levitation illusion, assisted by an audience member, to make his point that “wonder is what makes magic magical … wonder is disruptive simply because it feels uncomfortable.

“And when your wonder gets crushed, your ability to innovate and lead well gets crushed with it.”

First Tennessee Bank and Murfreesboro Young Professionals sponsored the event. MYP Chair Chase Salas thanked the college for the partnership and for allowing MYP’s members to come to campus during the year and speak to students about the importance of “networking, integrity and professionalism in the workplace.”

Urban also announced this year’s Leadership Summit award winners, who formally received their honors the night before the event during a special Sept. 26 reception.

• Wanda Lyle is a managing director and general manager of the UBS Business Solutions Center in Nashville, Tennessee, and is also president of UBS Business Solutions US LLC. Lyle is an active leader in the greater Nashville community with a particular focus on supporting public education and the city’s economic competitiveness. Her honors include recognition in the Nashville Business Journal’s Power 100 for 2017, 2018 and 2019 as well as the publication’s list of Power Leaders in Finance in 2018. She was also named in the Nashville Post’s annual “In Charge – Banking & Finance” list of industry leaders in 2016, 2017, 2018 and 2019.

Young Professional of the Year

• Matthew Stump is a mortgage banker who studied fine art in college. Stump’s primary role is to provide his customers with competitive loan options and personalized attention. He is involved with several local organizations and plays a key role on the board of directors for Murfreesboro Young Professionals and the United Way of Rutherford and Cannon Counties. He also is a founding member of The Legacy Society, plays an active role with Business Associates of Murfreesboro and volunteers with The Center for the Arts.