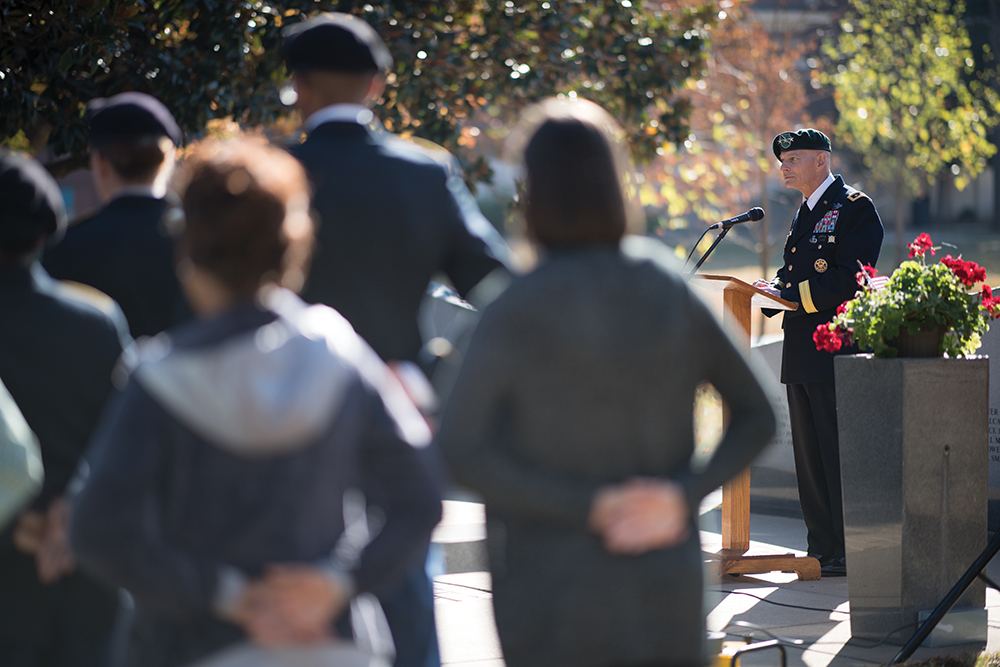 MTSU’s proud history of military friendliness has only been elevated since the arrival of Lt. Gen. Keith M. Huber to campus

To understand how difficult the journey transitioning from military to civilian life can be, consider Lt. Gen. Keith M. Huber, who spent 38 years in the U.S. Army, 14 of them as a general officer. When he retired from the military in 2013, his résumé had no corporate equivalent: His workdays sometimes involved combat, his business trips were tours of duty, his operating budget was $960 million, and his meetings were often with heads of state or the Joint Chiefs of Staff.

A civilian for the first time in his adult life, Huber pondered the path before him. To his mind, true retirement was out of the question, but so were many of the careers available to someone with his rarified skill set and political leverage.

“I consciously decided not to work for a defense contractor or be a news commentator or criticize other people or allow politicians to use my words and my experience to bludgeon other people,” he said.

Service is built into a soldier’s DNA, he added. He wanted to serve.

So, from his home in Franklin, he contacted academic institutions throughout Tennessee that had ROTC programs and offered to speak at commissioning or awards ceremonies, or anywhere else he could provide education or inspiration. When he spoke at MTSU, President Sidney A. McPhee was among the inspired.

With waves of newly discharged soldiers entering college on the Post-9/11 GI Bill, McPhee had been looking for a way to build on the University’s long track record of partnering with the military and educating veterans. MTSU had been recognized by G.I. Jobs magazine as a “military-friendly” campus, and it had a small but passionate group of faculty, one of whom was Hilary Miller, who worked tirelessly on student-veteran issues. The University also had been selected to participate in the Veteran Affairs’ new VetSuccess on Campus program, one of only 12 universities with a full-time VA benefits counselor.

McPhee invited Huber back to campus for a meeting with him and then-Provost Brad Bartel. There, he asked Huber to take MTSU’s support for veterans to the next level.

Huber’s initial response was no—not because he wasn’t humbled, he said, but because he needed to understand the mission.

“Give me 60 days,” he said to McPhee. “Let me find out who our student veterans are, what they need, and what other universities are doing for their veterans. Then I’ll give you my recommendations.”

MAN ON A MISSION

Huber and Miller spent the next two months talking to MTSU’s veterans — stopping them between buildings, visiting their classrooms, inviting them to talk over pizza, handing out surveys.

“When he first started, it was January,” Miller said. “It was super cold. And we would walk all over campus looking for veterans.”

Huber returned to McPhee with numbers.

“When I presented my assessment to him in March 2015, there were 1,066 student veterans on campus, average age 28.6 years, and 95 percent of that population had had at least one tour in Iraq or one tour in Afghanistan in combat, but normally multiple tours,” Huber said.

He also returned with an understanding of what these men and women needed. Many of them had families; all of them had the singular sense of purpose that comes from military training.

“Student veterans aren’t at universities for the college campus experience,” he said. “They’re there because this is their next mission.”

These nontraditional students needed a “one-stop shop” where they could ask questions not just about academics or education benefits but also about finances, housing, health care, and jobs — what Huber calls “the complete life cycle” of transitioning from soldier to civilian.  That required a dedicated physical location, and not just a place to tell war stories.

McPhee offered him 2,600 square feet of space and $329,000 to design, build, and equip a veterans center on the first floor of Keathley University Center. And he asked Huber to stay on at MTSU as senior advisor for veterans and leadership initiatives.

The retired general replied, “I’d be honored to, as long as I can make a contribution to serving our student veterans.”

He’s been a man on a mission ever since.

“Student veterans aren’t at universities for the college campus experience . . . this is their next mission.”

Miller, who works closely with Huber and is herself a force of nature, admits she can hardly keep up with him. Asked whether there’s symbolic value to having a general on campus advocating for veterans, she mulls it over for a moment.

“Perhaps he could be symbolic, potentially,” she said, “but he’d have to slow down for somebody to make a symbol of him.”

Eight months after Huber delivered his recommendations to McPhee, the new veterans center was complete—to the apparent surprise of everybody but Huber.

“After the opening ceremony,” he recalled, “I had several professors come up to me and say, ‘Do you know what you’ve done?’ I said, ‘I think we dedicated a veterans center.’ And they said, ‘No, what you’ve done is remind all of us what can be accomplished when you have focus and persistence.’ ”

Focus and persistence: That sums up Huber’s approach for the past two years as he’s worked to build a collaboration of outside resources— individuals, nonprofits, businesses, and government agencies—to support the center’s goals and expand its reach far beyond MTSU.

Over the past two years, musician Charlie Daniels and his wife, on behalf of the Journey Home Project, have donated $120,000 to the center, which was named in their honor August 2016. Meanwhile Miller, who agreed to leave the College of Liberal Arts to direct the Charlie and Hazel Daniels Veterans and Military Family Center, secured $276,000 in grants through Tennessee’s Veterans Reconnect program.

Those funds helped her and Huber establish complementary staff positions designed to complete the soldier-to-civilian life cycle by conveying education into meaningful employment. An employer search agent, who will match student veterans with job opportunities, will work alongside a transition manager in the newly opened Veterans Transitioning Home space just above the Daniels Center. Huber predicts that by the time finite funding for the two new positions runs out, they will have proven measurably worthy of becoming permanent or even being replicated elsewhere in the university.

The Daniels Center already had four full-time university employees, as well as other staff paid by the VA: student veterans who are peer advisers, the VetSuccess counselor, and the only full-time VA clinical social worker located on a college campus.

That last fact reflects Huber’s willingness to leverage his name to benefit student veterans. Determined that they shouldn’t have to jump through hoops to get mental health counseling, Huber called two of his former West Point classmates — the secretary and deputy secretary of the VA — who agreed to supply a full-time social worker at the MTSU veterans center.

“Most people within government at the state or federal level either know me or they will listen to me, just out of courtesy for someone with my seniority,” he said. “And as long as I don’t use that for my own ego or self-promotion, it really helps me to help people.”

Case in point: When one academic department had trouble lining up VA internships for its students, Huber called a meeting with the VA’s regional director and the departmental faculty at MTSU.

“We sat down and figured out what we needed to do to get the internships going, and it was done,” Miller said. “Perhaps he just extends an invitation where people never thought to do it before.”

Huber has incorporated that straightforward approach into new campus traditions, such as an annual 9/11 observance and a stole ceremony for graduating veterans, that both honor student veterans’ service while also raising their visibility among potential employers. As chair of the Nashville Serving Veterans Community Board and the Fort Campbell Retiree Council, he works regularly with middle Tennessee’s political and business leaders and includes them in these MTSU events.

Miller notes that Huber simultaneously works on the macro and micro levels. He uses his vast network and professional gravitas to advocate for MTSU’s student veterans as a whole, but he also will work one-on-one with any veteran in transition.

“He is very much a soldier’s soldier,” she said. “He protects his soldiers, the same way he’s always done.”

Huber considers the Daniels Center a national resource, not just a campus resource, she added.

“We will assist anybody that needs help,” Miller said. “We have no recruitment mission. No one is going to be hired, fired, or promoted based on how many veterans come to MTSU.”

But they are coming. Huber regularly fields calls from newly discharged soldiers who tell him they served with him in Afghanistan or Iraq or Kosovo. Some want his help, but others just want reassurance that he’s going to stay at MTSU.

Because if he is, they’re coming too. MTSU