In the News: DNJ spotlights ne.. 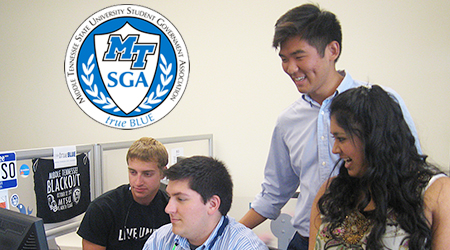 With a beaming smile and a winning way with words, it’s easy to see how James Lee was elected president of MTSU’s Student Government Association for 2013-14.

The Clarksville native, whose early years were spent on the road because of his father’s service in the U.S. Army, chose MTSU to take advantage of the freedom a college campus offers while staying close enough to home to keep in touch.

But instead of enjoying the summer with his family in Clarksville, the West Creek High School graduate is poring over records and making connections on campus in preparation for the work that lies ahead.

SGA, a unicameral legislative body with senators elected from MTSU’s colleges, is the voice of the more than 25,000 students attending the university. Lee is a member of MTSU President Sidney A. McPhee’s cabinet and has direct access and regular contact with the university administration. Through SGA, the student body is represented in almost all facets of campus life, from the university’s standing committees to planning Homecoming.

“James has quickly made his presence known in our cabinet meetings and is already engaged in our discussions and planning for the next academic year,” McPhee said. “He hit the ground running.”

Lee said he intends to push for a truly transparent SGA that makes sure every student knows exactly what’s going on and where the money’s going.

In addition, the rising senior of Korean descent said while he represents all students, he is concerned about those who feel left out.

“I wanted to be a voice for the students that weren’t really feeling represented or feeling underrepresented,” Lee said.

With three student orientation assistants on his executive board, Lee will have feedback from people who will help him get a handle on what matters to the student population.

He said he also intends to engage in greater promotion of the Student Food Pantry, a clearinghouse for nonperishable edibles for underprivileged students.

“It’s really more of an awareness thing,” said Lee, a finance and marketing major. “People aren’t going to use the food pantry unless they know about it.”

Deb Sells, vice president for student affairs and vice provost for enrollment and academic services, said the priority Lee has placed on inclusiveness fits well within SGA’s “I am True Blue” theme, which is shares with the university.

The university uses “I am True Blue” to signal its devotion to student success and a community devoted to learning, growth and service, Sells said. Lee will lead MTSU’s new freshman class in reading the “True Blue Pledge,” which sets forth those goals, when MTSU holds its convocation on Aug. 25.

“James is a wonderful representative of our True Blue spirit,” Sells said. “He is a good listener and a quick learner. He asks critical questions, and approaches his work with energy and enthusiasm. He is positive and approachable and will be a terrific SGA president.”

You also can watch a video interview with Lee below.