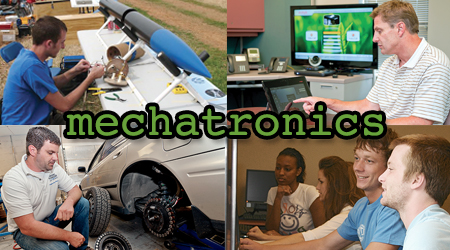 When the Tennessee Board of Regents approved a mechatronics program for MTSU’s engineering technology department last Friday in Morristown, the seal of approval followed a whirlwind of activity, starting with a suggestion by the university president and numerous groups partnering to make it happen quickly.

Pending Tennessee Higher Education Commission approval that appears to be a formality July 25, mechatronics will be off and running at MTSU starting this fall.

Mechatronics is a design process that includes a combination of mechanical, electrical, control and computer engineering. The program is based on a three-level international certification program created by Siemens, a German engineering company.

MTSU’s mechatronics program is expected to quickly attract students and, upon graduation, their skills and their bachelor’s degree will land them jobs in a workforce that is facing a critical shortage.

“It’s for the students and it’s for industry,” said Dr. Walter Boles, engineering technology chair, adding that “probably by the end of fall we’ll have 100 majors.”

“We’re fulfilling a need that’s out there and not been adequately addressed. … I firmly believe the growth of the mechatronics program will be phenomenal.”

Bartel said he, Boles and others attended meetings where representatives from “Nissan and Bridgestone were telling us that, worldwide, there’s a huge shortage of people with these qualifications. We need to pump people into the workforce, and we accomplished this in about a year and a half.”

Boles said MTSU President Sidney A. McPhee told him nearly two years ago that Motlow College “has a mechatronics program and we should get involved.”

Boles inquired with Motlow and learned about a federal grant the school received for its mechatronics program for the Smyrna campus.

Motlow’s McMinnville campus also incorporated the program and raised funds “because the (industry) people of McMinnville were so concerned about the issue.”

He said engineering technology advisory board members “were already involved in promoting mechatronics at the high school level.”

Boles said Jimmy Davis, a small business owner and former chair of the advisory board, told them “we’ve got to do something about the shortage of technically qualified people they could hire.”

A year ago, with the collaboration of Drs. Charles Perry, Ahad Nasab and Boles in engineering technology and Drs. Peter Cunningham and Amy Sayward in graduate studies, the proposal and letter of intent processes got underway.

Once THEC approves, Boles said full-scale advertising and promotion of the program will begin. Current students will receive emails about the new program. CUSTOMS summer orientation students will be informed.

Bartel said two new faculty members already have been hired. Boles said they “will be teaching certain elements of the program along with existing faculty, and we still are in the process of hiring a mechatronics person who will be teaching advanced (systems integration) courses.”

Eventually, MTSU will have to purchase equipment for the program, he said, adding that for now, engineering technology can utilize Motlow’s equipment at the Bridgestone facility in La Vergne.

“We’re going to be teaching mechatronics in a general sense, but we want to make sure that our students are qualified to take and pass the Siemens Level 3 certification.”

Graduates with an associate degree from community colleges such as Motlow can potentially earn a Level 2 certification. Graduates from the Tennessee Technology Center at Murfreesboro and high school students who have earned 16 hours of college credit and are about to graduate can possibly earn Level 1 certification.