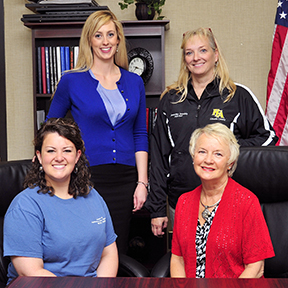 MTSU junior Haley Cobb, seated at left, is the first recipient of the Billie and Burton Towry and Linda Lane-Overton Scholarship at MTSU. Seated next to her is MTSU alumna Linda Overton, who provided gifts to endow the scholarship and presented Cobb her scholarship in April. In back are Kara Youngblood, left, coordinator of MTSU’s agribusiness program with community colleges and an MTSU instructor, and Jennifer Snoddy, Lincoln County High School Future Farmers of America adviser and an MTSU alumna. (Photo by Paul Henry/Elk Valley Times)

While watching Super Bowl XLVII in February, a Lincoln County, Tenn., native and Middle Tennessee State University alumna knew she made the right decision regarding an endowed gift to the university.

During the game — won by the Baltimore Ravens, 34-31, against the San Francisco 49ers — the now famous “So God made a farmer” commercial for Dodge Ram trucks aired, featuring the late Paul Harvey’s narration.

“The commercial came on,” said Linda Overton, who now lives in Dothan, Ala., with her husband, Hugh. “There was a beautiful landscape, and it showed a farmer. There was a silhouette of a little girl walking with the farmer, and it reminded me of my daddy and me when I was a little girl.”

“At the end of the commercial,” she continued, “Paul Harvey says, ‘… So God made a farmer.’ It just really hit me.”

In December 2012, Overton established the Billie and Burton Towry and Linda Lane-Overton Scholarship for students who graduated from either Lincoln County High School or Blanche High School and want to pursue agriculture at MTSU.

“I knew I had done the right thing,” Overton added. “… Farming is such a big part of everybody’s life. Where would we be without agriculture?”

In April at the annual School of Agribusiness and Agriscience banquet, Overton presented a $1,000 scholarship to the first recipient: MTSU junior Haley Cobb, an agribusiness and public relations double major from Taft, Tenn. Overton was joined at the banquet by her son, Michael Lane of Nashville and a former MTSU student, and her husband, Hugh.

“I’m glad it worked out, that I could do it, and give it to Haley and go on and get it started,” Overton said of the April gift. Overton’s banquet remarks prompted ag student Victoria Harris to suggest the Student Agriculture Government Association sell “So God Made a Farmer” T-shirts, which now are in their fourth order.

“This has been a fantastic opportunity,” Cobb said. “Coming from a small farming family, having any help to pay for college is a relief for me and my parents.” She added that she receives $4,000 from the Tennessee HOPE Scholarship Program and 50 percent off for tuition from serving as executive vice president of the Student Government Association.

Billie, left, and Burton Towry are shown with their daughter, Linda Overton, in July 2009. Overton has made gifts to endow an MTSU agriculture scholarship for a Blanche or Lincoln County high school student. The Towrys, longtime Lincoln County fixtures, owned and operated Towry Gin Company and Towry Enterprises Inc., both agriculture-related businesses. Burton Towry later owned and operated Quality Car Sales in Fayetteville. He passed away in 2009; Billie died in 2011. (Photo submitted by Linda Overton)

MTSU School of Agribusiness and Agriscience Director Warren Gill said Overton “was very involved in the process. She wants to promote agriculture to people looking for a degree.”

Amy C. Hardin, development director for the College of Basic and Applied Sciences, said the generosity of donors like Overton cannot be overstated.

“Because of this scholarship, students will continue to experience the outstanding agriculture department at MTSU without facing greater financial burden,” Hardin said. “Student support is the number one priority of the Centennial Campaign and supporters like Linda are instrumental in making this initiative a success.”

As Linda Towry, she grew up around agriculture in rural Lincoln County. Billie and Burton Towry owned and operated Towry Gin Company and Towry Enterprises Inc., consisting of a cotton gin, a granary and a long-haul trucking company. During the cotton and grain seasons, her parents worked side by side in the office of the operations in the Kirkland community.

Deeply devoted to each other, the Towrys were fixtures in their community, even after Burton Towry retired from the business and then owned and operated Quality Car Sales in Fayetteville. He passed away in 2009; his wife died in 2011.

While at MTSU, Linda Towry met her first husband, Mike Lane, who died in 1997. She retired from corporate sales with Blue Cross/Blue Shield of Tennessee in 2004. She and Hugh Overton, who have been married 13 years, attend University of Alabama football games, and they were among Blue Raider fans at the GoDaddy.com Bowl Jan. 6, 2011. Her civic involvement includes her church, The Salvation Army, the Red Cross, Organ Donors Association, Dothan Service League, the Southeast Alabama Medical Association and other community efforts.

MTSU junior agribusiness and public relations double major Haley Cobb of Taft, Tenn., shows one of the “So God made a farmer” T-shirts inspired by the Super Bowl XLVII commercial narrated by the late Paul Harvey. The shirts are being sold by the Student Agriculture Government Association. Cobb is the first recipient of the Billie and Burton Towry and Linda Lane-Overton Scholarship for students from Blanche and Lincoln County high schools who want to pursue agriculture at MTSU. (MTSU photo by News and Media Relations)

Current Lincoln County High School students and graduates now attending MTSU are eligible to apply for the next Towry/Lane-Overton scholarship. The deadline is March 1, 2014. The application is available online at http://www.mtsu.edu/abas/scholarships_info.php.

Overton, who earned a business and business education degree from MTSU in the 1970s, said applicants must “show financial need,” but their overall GPA can be 2.75 or higher.

“It’s very important that people applying don’t have to have straight A’s,” she said. “Some of my C’s were just as important and I’ve done well in life.”

Quite outgoing and involved in student organizations, Cobb participated in a two-month educational internship with a bilingual magazine in China this past summer.

Cobb is a member of Alpha Chi Omega and Order of Omega, she has been a part of the MTSU horse-judging team, served as MTSU Panhellenic Council secretary and just finished a term as a National Future Farmers of America Collegiate Agricultural Ambassador.

Cobb and Overton have met several times. Cobb said Overton “is one of the funnest people I’ve ever been around, and she wants to give back to the university.”