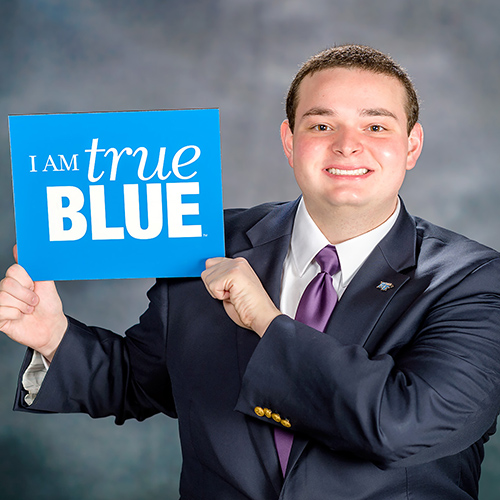 MTSU student Nick Lembo joined over 500 other students representing Tennessee colleges and universities this past fall at the legislative chambers of the State Capitol in Nashville to share ideas and opinions, all while getting the opportunity to learn how the government works.

Originally from Fort Lauderdale, Florida, the junior political science/pre-law major served as a delegate to the Tennessee Intercollegiate Student Legislature. TISL “is a forum for the top echelon of the state’s campus leaders to exchange ideas, express their opinions and learn how government works,” according to its website.

Lembo represented MTSU and MTSU’s Student Government Association by being elected the TISL’s Speaker of the House.

MTSU student Nick Lembo, shown here, joined over 500 other students representing Tennessee colleges and universities this past fall at the legislative chambers of the State Capitol in Nashville as a delegate to the Tennessee Intercollegiate Student Legislature. (MTSU photo by J. Intintoli)

Lembo said he was humbled to be elected by his peers. He was required to give a speech outlining his qualifications, experience and who he is as a person. His campaign platform centered on consistency and core values.

“My first experience was groundbreaking,” he said. “I became familiarized with the process of debating, sponsoring legislation and the duties of being an elected official.”

Lembo got involved in TISL during his sophomore year, when he was encouraged by another student to see what it was all about. The organization strives to give students a better understanding of how government procedures are handled. At a student level, responsibilities of leadership, parliamentary procedure and logical arguments of bipartisan debate are discussed and practiced.

Lembo serves as a committee chairman for internal affairs in the SGA, and he knows that the experiences he had with TISL in November 2016 will help him with any obstacle he may face while holding a leadership position in the SGA.

“SGA is a driving force for learning about politics and law. It teaches students how to utilize those skills to make the most of their TISL experience,” said Dr. Danny Kelley, SGA faculty adviser and assistant vice president for student affairs.

“Anyone can make an impact. Attending TSIL has opened my eyes to the realities current politicians and citizens face,” he said. “I encourage you to research a current problem, reach out to others for their opinion, find a solution and present it.”

Lembo is exemplifying his True Blue spirit while attending MTSU, also pursuing a philosophy minor. His future endeavors include law school so he can make a change in people’s lives through pen and paper.

“As it’s often said, it’s not about the letters on the paper as much as it is about the people behind the letters,” he said.