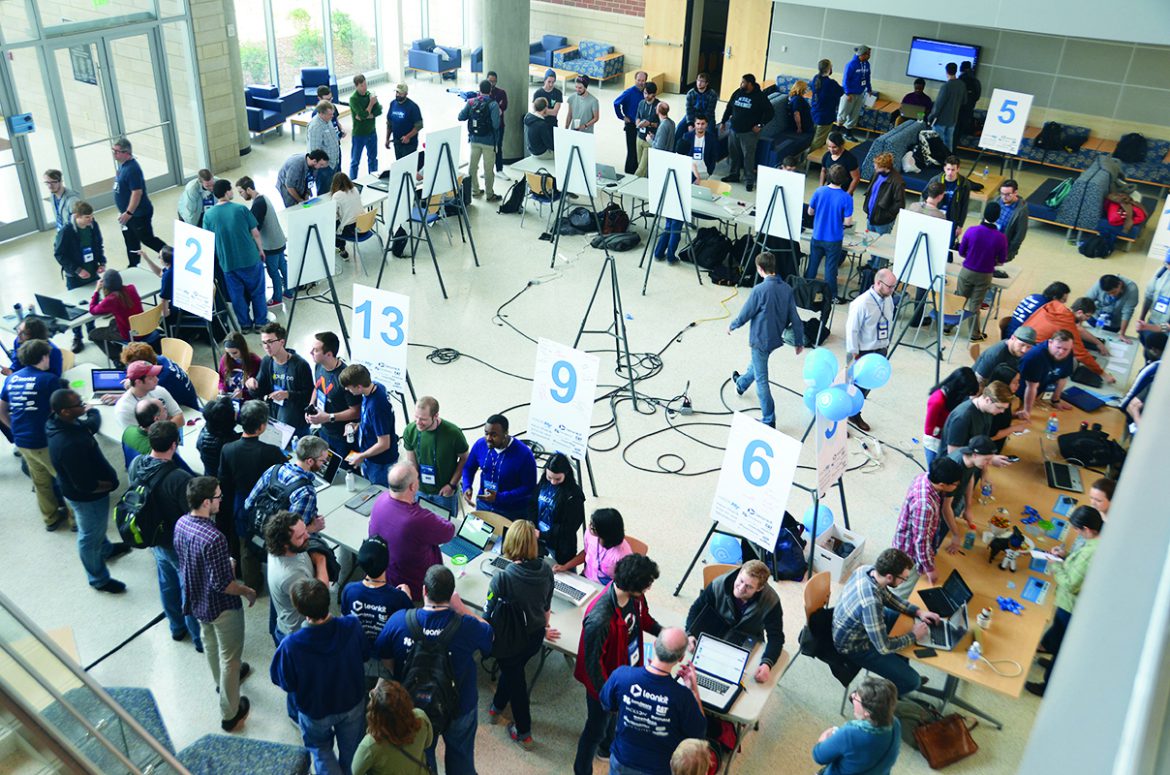 CEO Hefley’s 2015 acquisition of Henderson’s company, Firefly Logic, nearly doubled LeanKit’s size, bringing the seven-year-old startup to 125 employees as of the spring of 2016. Among the company’s more than 2,000 customers are Xerox, CarMax, IBM, and Target.

LeanKit delivers visual project management software to improve productivity. Hefley founded the company with two other partners in 2009 after graduating from MTSU and spending years working in IT at various corporations.

LeanKit’s need to hire so many new, tech-trained professionals is just one example of the ever-growing tech job opportunities available in Nashville. About 1,500 technology positions need to be filled locally, according to the Nashville Technology Council (NTC), and that number is expected to rise if recent trends continue. Such a dire need for tech talent in Music City led the Nashville Area Chamber of Commerce—in part through its WorkIT initiative—to formally market Nashville as a great place to land a tech job, going so far as to highlight the city’s atmosphere, opportunities, and lifestyle in newspaper advertisements in cities like Boston.

The main supplier of that much-needed local tech talent, though, is located much closer than Massachusetts. It’s MTSU, and, specifically, the University’s large and expanding Computer Science Department, the largest in the state. As evidence, consider that 24 of LeanKit’s 125 employees (including Hefley and Henderson) are MTSU graduates.

MTSU Computer Science student has 36 hours to develop mobile applications and compete for the title. Photo by Eric Sutton

The Future Is So Tech

With nearly every aspect of our lives touched by technology, the need for people who can write code, keep systems secure and maintained, and create applications and software will only continue to grow. Nationally, jobs in computer and information technology could grow 12 percent from 2014 to 2024, according to the Bureau of Labor Statistics.

“All companies employ tech now,” said Colleen Hoy, director of the NTC’s We Build Tech platform. “In Nashville, tech growth is tremendous within the entrepreneur community and in industries like healthcare IT across the state.”

A big part of the NTC’s mission is to connect business, tech professionals, and educators.

[bctt tweet=”With MTSU being one of the pre-eminent universities, all parties need to know what opportunities are here.” username=”mtsunews”]

“Our role is to build a bridge between education and business,” Hoy said. “With MTSU being one of the pre-eminent universities, [all parties] need to know what opportunities are here.”

MTSU is most certainly right in the thick of the action, enjoying and building on its connections with local and national employers and organizations such as the NTC. Just a few examples of the varied places MTSU Computer Science graduates have recently launched careers in Nashville include Dell, Gibson Guitar, Passport Health, and Vanderbilt. MTSU Computer Science grads have also recently landed tech jobs nationally at name-brand employers ranging from Google to Microsoft to Oak Ridge National Laboratory.

“They come out with a lot of passion,” Hefley said of his own MTSU hires. “Throw a problem at them, and they figure it out.”

That “get-it-done” attitude, Henderson said, is a primary reason MTSU graduates get hired in the first place.

“It’s a joy to work with them,” she said, adding “Today’s graduates are in a really good spot. . . . There’s a different level of energy in the Nashville area.”

So how does a student prepare themselves for a role in Nashville’s burgeoning tech sector? For MTSU undergraduates eyeing such future employment, an abundance of preprofessional opportunities await them on the MTSU campus.

“They come with a lot of passion…Throw a problem at them, and they figure it out.”

Nowhere is such real-world, problem-solving more evident than at the University’s annual “hack-a-thon,” an intense, caffeine-fueled few days of coding and working in teams to create apps, websites, games, or other tech developments. (The word “hack,” better known for its negative computing definition, actually means to intensely write code.)

In partnership with Hack Tennessee, whose founders have hosted more than 20 hack-a-thons locally, MTSU’s Computer Science Department held its first, highly successful Hack MT in January 2016. Sponsored in part by (appropriately enough) LeanKit and mentored by professionals including Hefley and Henderson, the event involved about 200 computer science students alongside MTSU professors and mentors collaborating (read: creating) for 36 consecutive hours. In the end, 16 projects made it to the presentation-judging phase.

Among the creative accomplishments were a travel app and MTSU tutoring and food service apps. The “Hey, Waiter!” one can provide users with estimated wait times for meals at MT Dining/Aramark venues on campus. MTSU-based Star Jam team members earned the Gold Motherboard Award. The My Myo team, which included students from MTSU and other universities, earned the silver for creating a sensor for a gesture-control armband. A University of Tennessee–Knoxville student team named Mooch captured the judges’ bronze award.

“It absolutely exceeded any expectations I had,” Henderson said. “To see the energy level, the number of students who stayed, and the sponsors’ involvement, it was a positive event and great for the computer science community.”

“I was astounded by all of them,” said Chrisila Pettey, chair of MTSU’s Department of Computer Science. “It was amazing the work they did. Projects were all so different and all so creative. . . . It’s about quickly learning, being adaptable, and working in teams. A hack helps build all those things.”

Just like in the real world, a team of co-workers must be able to listen and learn from each other. “At a hack, you work quickly, in teams, and may have to ask for help,” Hefley said. “It’s just a great microcosm of everyday life as a developer.”

LeanKit’s satisfaction with the event is evidenced by the fact that the company will be back on campus in February 2017 as a returning sponsor of the second annual Hack MT (see sidebar “Back to Hack” for more information.).

“Why would we go to a headhunter and spend $15,000 when we can sponsor a hack and meet the talent ourselves,” Hefley said.

“The people who self-select to spend a weekend doing this, to lock up and write code—we want to meet them.”

Computer Science master’s student Michael Murphy was among the talent Hefley was able to meet at the first event. Murphy said he enjoyed MTSU’s inaugural hack-a-thon so much that he intends to return for the second annual event even though he will no longer be an MTSU student. “There’s no pressure but self-pressure,” he said. “[It’s] friendly, encouraging, where the whole community is
about helpfulness and support.”

The hack-a-thon weekend, though, is just one way MTSU grows students’ skills and connections in the tech space. “We care about our students and try to provide many opportunities,” Pettey said.

Along with fielding the stream of queries from companies, MTSU brings potential employers to campus. About 20 companies came to campus in fall 2015 for the IT Connect Fair, attended by 200 students. The University planned to bring in additional companies this fall (among those firms were representatives of Genesco, Digital Reasoning, and Nissan). Companies present on a topic and stay available to talk with students. Google officials travel to MTSU at least once a year to do presentations and activities with students.

“I remember the visits from businesses,” Hefley said of his time at MTSU. “Those made a big impression on me.”

Perfectly complimenting MTSU’s Computer Science Department in the College of Basic and Applied Sciences is the Computer Information Systems Department in the Jones College of Business. Each graduates about 150 students every year. Combined, the two departments have about 400 undergrads. (Basic and Applied Sciences also boasts a top-notch M.S. program in Computer Science and a Computational Sciences Ph.D. program.)

“Both of our departments are doing great things and creating two types of IT professionals,” said Charles Apigian, chair of Computer Information Systems. “Employers are looking for both information systems
and computer science.”

Indeed, employers are looking. And MTSU has built a trust with companies who routinely call for job candidates. “There is a continual stream of people asking me for
students/alums to apply for internships and positions,” Pettey said.

Apigian agreed. “HCA might call and say ‘Hey, I need four candidates or interns.’ I feel so strongly about some of our students that I will urge them to take an internship. Many times, that becomes a job,” he said.

“We’ve created trust that our grads are ready,” Apigian added. “Our students have certain characteristics employers love. They’re not entitled. They’re hard-working and willing to work on their own.”

Henderson was one such grad. After a professor noticed her talent in math, she switched her major. But a required Computer Science class would be the real game-changer for her. “Computer Science changed my life,” she said. “I thought, ‘People get paid to do this?”

Henderson co-founded Firefly Logic in 2004. The company grew to be one of the Nashville area’s hottest software programming companies, boasting clients that included Microsoft, Travelocity, and the Country Music Association prior to LeanKit’s acquisition.

Henderson’s passion to tell others about the opportunities in computer science stems from her time at MTSU where she said she jumped on every opportunity professors presented to her. Time evidently hasn’t changed her “seize the day” mentality. Henderson, now LeanKit’s director of organizational development, currently serves on the board at NTC and advises on curriculum at MTSU along with Hefley.

“They want success for all of their students,” she said of the MTSU Computer Science faculty. “That’s the culture. They really work to encourage. It meant a lot for them to say to me, ‘You can do this.’ MTSU gave me the foundation, the core principals. It taught me how to learn.”

And by being taught how to learn, MTSU students in the Computer Science program are well-prepared to complete the work Nashville so desperately needs.