Learn about eclipses as MTSU c..

Today’s university library is not just literary but also digital and kinetic, and MTSU’s latest contribution to the trend is getting positive reviews.

The James E. Walker Library celebrated the success of its new “Makerspace” area with an official grand opening and dedication ceremony Wednesday, Feb. 1, in the second-floor Digital Media Studio. You can watch a video from the event below.

The area provides equipment that enables students to design and work on projects, as well as write computer code or other specifications with which they can replicate those projects.

“The idea is that you don’t have to be a whiz coming in,” said Bonnie Allen, dean of the Walker Library. “You’re just going to be one leaving.

“We will show you. We will train you. This is way cool stuff, new toys, and it crosses every discipline on campus.”

Students and faculty crowded into the area to watch student workers demonstrate 3D printers, a resin printer, a laser cutter/etcher, a vinyl cutter, virtual reality and kits full of parts that can be used to build just about anything one can imagine.

Library student worker Michael Dailey, a computer science major from Lascassas, Tennessee, demonstrated a mechanical arm that manipulated a Sharpie. The arm was created with one of the Makerspace MakeBots kits.

“They’re kind of little Erector Sets for adults,” Dailey said as the arm moved the Sharpie over a blank surface.

Dailey also demonstrated a Raspberry Pi, a $35 collection of sensors and electronic parts that can be used to build larger digital items. By speaking in the direction of the colored light-emitting diodes attached to the motherboard, Dailey made the LEDs light up.

“It’s basically just a minicomputer that you can hook up all kinds … of peripherals to,” said Dailey.

Neal McClain, center, director of library technology at MTSU’s Walker Library, demonstrates how a mechanical arm created with one of the MakeBots kits manipulates a Sharpie during the grand opening of the Makerspace area. (MTSU photo by Eric Sutton)

“We’re working on it,” said Becker. “We’ve got a couple of 3D printers in house now, and we’re hoping to open our new community technology center in the next year or year-and-a-half.”

Dr. Saeed Foroudastan, associate dean of the College of Basic and Applied Sciences, was impressed. He said students definitely can use Makerspace for numerous class projects.

“They’re going to get more interested in this technology,” said Foroudastan. “If you can imagine something and come and make it, they will study more.”

Allen also put in an appeal for students to work in the Makerspace area to be trained to help students become accustomed to the equipment.

“It’s super cool,” said Spencer Butler, a biology major from Lebanon, Tennessee. “The university has gone above and beyond.”

For more information about Makerspace, contact Neal McClain, director of library technology, at 615-898-2572 or neal.mcclain@mtsu.edu, or coordinator Valerie Hackworth at 615-904-8545 or valerie.hackworth@mtsu.edu.

Library student worker Michael Dailey, a computer science major from Lascassas, Tennessee, demonstrates some of the creative kits and materials available to students during the Feb. 1 grand opening and dedication of the new “Makerspace” area, located in the second-floor Digital Media Studio of the James E. Walker Library. (MTSU photo by Eric Sutton)

Virtual reality technology is among the equipment available to MTSU students in the new “Makerspace” inside the James E. Walker Library. (MTSU photo by Eric Sutton)

Today’s libraries are places of construction as well as concentration, and MTSU is right in step with the changes. 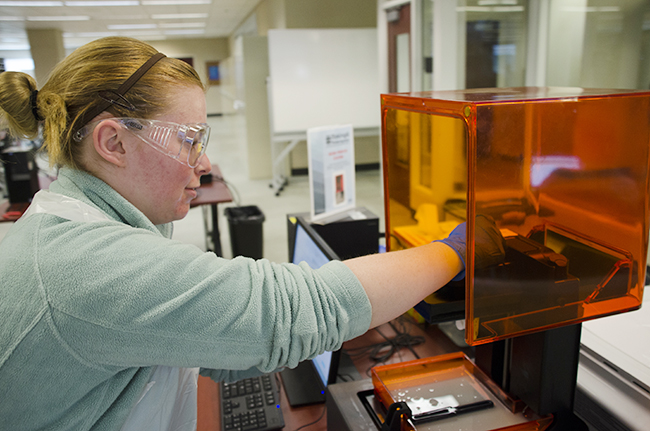 The James E. Walker Library will celebrate the success of its new “Makerspace” area with an official grand opening and dedication ceremony at 2 p.m. Wednesday, Feb. 1, in the second-floor Digital Media Studio. Light refreshments will be available.

The area’s equipment lets students design and work on projects as well as write computer code or other specifications to replicate those projects.

Makerspace is equipped with 3D printers, a resin printer, a laser cutter/etcher, a vinyl cutter, virtual reality and kits full of parts that can be used to build just about anything one can imagine.

“It’s to give students a place to challenge themselves, to come in and try to take an idea and prototype it and get it to fruition,” said Neal McClain, director of library technology. “It’s a place where they can work together with students from other disciplines.”

Art majors, for example, can make kinetic sculptures that move via built-in motorized systems. Education majors can familiarize themselves with LittleBits kits, which are being used by children in grades three through eight. With virtual-reality equipment called Oculus Rift, electronic media communication students can envision and create their own animation videos.

McClain, who holds a master’s degree in computer science, said he sees the library as a totally appropriate place for this hands-on approach to satisfying intellectual curiosity.

“An academic library, once upon a time, was just a place to go do research and study in the dead quiet,” said McClain. “That game’s changed in the last 10 to 12 years.”

To spark interest in Makerspace, McClain has placed colorful little figurines created with the 3D and resin printers at the Digital Media Studio’s front desk.

Dogs, cats, unicorns, Pokémon characters and Darth Vader, among others, greet incoming students as Makerspace mascots. They were mere threads of plastic before the printers turned their creators’ computer code into physical entities.

Student programmer and mechatronics engineering major Aldair Nieto said Makerspace is especially important to students with projects they must complete for classes.

“The equipment looks complicated because it may be unfamiliar to them,” said Nieto.

“Once they give it a try, they will realize it is actually somewhat simple to use. All they need is a good imagination and to be willing to take a chance at trying something new.”

For more information, contact McClain at 615-898-2572 or neal.mcclain@mtsu.edu, or visit the Walker Library’s Makerspace information page at http://library.mtsu.edu/makerspace.php.

These objects, which were created with equipment in the Makerspace area of MTSU’s James E. Walker Library, are on display at the front desk of the library’s Digital Media Studio. (MTSU photo by Darby Campbell)