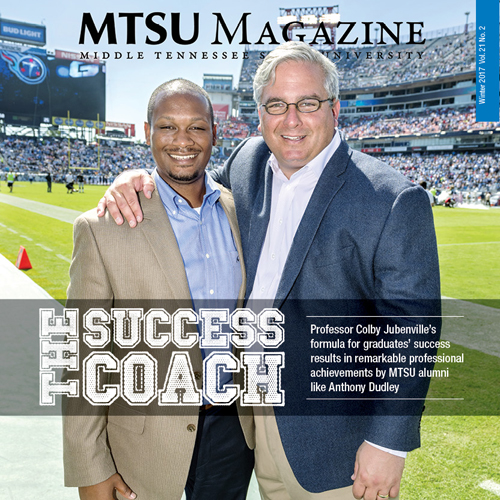 The winter 2017 edition of MTSU Magazine profiles a handful of university partnerships with industry that are benefitting not just students but the community as a whole.

Included are profiles of the university’s role as a talent pipeline to Nashville’s burgeoning fashion scene; to the rapidly expanding microbrewery, distilling, and fermented food processing industries; and to Middle Tennessee’s exploding commercial real estate market, as examples.

The issue also profiles a slew of wildly successful graduates of the university — including the 2016-17 Distinguished Alumni recipients.

Click the image to view a flip-page version of the magazine.

And, in the cover story, the magazine details the creation of MTSU’s new Center for Student Coaching and Success, a donor-supported effort aimed at ensuring MTSU graduates find not just employment upon graduation but meaningful employment that drives personal success and the local economy.

MTSU, the largest provider of graduates for the Middle Tennessee area, remains an irreplaceable resource in the Midstate— not just from an academic and cultural aspect, but also from a workforce development perspective, at a time when industry is clamoring for better-prepared graduates, and policymakers including Gov. Bill Haslam are calling for greater degree attainment to meet the needs of the future workforce.

Readers may also download MTSU Magazine free for their iPads and Android devices. The MTSU Magstand app, available in the iTunes store and now at Google Play, includes special multimedia content built into every issue that’s not available in the print editions. Printed copies of MTSU Magazine are distributed twice annually to more than 105,000 alumni readers. MTSU Magazine also is available online at www.mtsumagazine.com.

About the cover story

Graduates of his program now occupy front-office positions in top-tier franchises like the Houston Astros, Tennessee Titans, and Talladega Motor Speedway, as well as local organizations such as the Nashville Sports Council.

“My focus at MTSU over the last 15 years is about helping students find their voice. And voice is the intersection of talent, passion, conscience and need in the world,” Jubenville said.

To that end, and with significant financial assistance from private donors, Jubenville and the College of Behavioral and Health Sciences recently launched the new Center for Student Coaching and Success – a place for Jubenville to do in an official capacity what he has been doing unofficially for 15 years.

A seven-figure financial gift from local real estate developer John Floyd served as the true launching point for the center, which will be housed in the new Andrew Woodfin Miller Sr. Education Center on Bell Street. Half of that pledge has already been delivered to the university.

Floyd, founder and owner of Ole South Properties, the state’s largest independent homebuilder, said his gift represents the organic relationship between the university as an economic driver for the region and the success his company has enjoyed as a provider of affordable housing throughout Middle Tennessee.

Other articles in the new edition of the magazine profile: