MTSU closes May 31 for Memoria.. 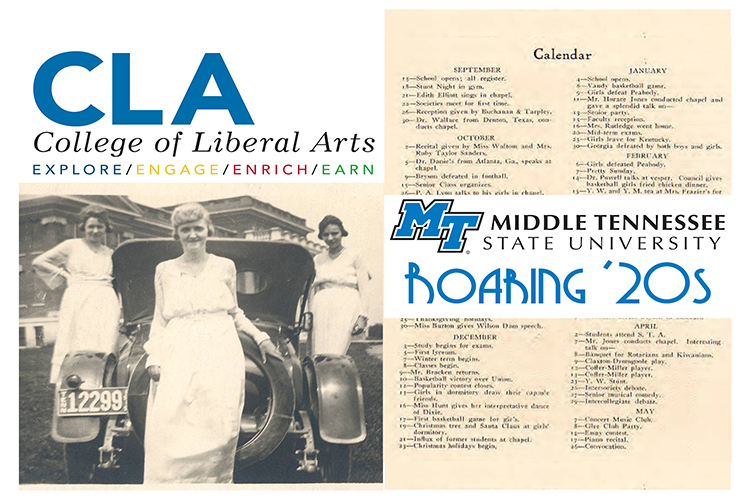 Curious adult learners had a great — and free! — opportunity May 11, thanks to MTSU’s College of Liberal Arts and the MTSU Alumni Association: a day of online learning filled with fascinating facts about “The Roaring Twenties.”

The college’s annual community outreach program, called “Lifelong Learning,” offers both MTSU alumni and university neighbors an opportunity to expand their knowledge of a variety of topics without homework and quizzes.

Normally held on campus on consecutive Mondays each May, this year’s abbreviated single-day session was strictly virtual, via Zoom, to reach more learners more safely.

For the daytime sessions, the “lifelong learners” heard from two outstanding Liberal Arts faculty members about the 1920s’ impact in France and the decade’s legacy on the Broadway stage.

The evening session gave participants an opportunity to “sip and learn” about the lasting effects of Prohibition in Tennessee from the executive director of the Tennessee Distillers Guild.

MTSU professor of French Nancy Goldberg, an award-winning faculty member in the Department of World Languages, Literatures, and Cultures, kicked off the day  with “Roaring to Forget: France 1919-1929.”

During her hourlong talk, Goldberg, who teaches French and Francophone Studies at MTSU with a special focus on French writers during World War I, explained how 1920s’ Paris wasn’t the eternal “movable feast” that Ernest Hemingway pronounced it. Alongside the glitter and excitement that drew expatriates worldwide to France was the crushing reality faced by unemployed veterans, widows and orphans forced to deal with the legacy of the Great War.

Her talk is available below.

Shamburger is the director of MTSU Theatre’s last several seasons of big-ticket spring musicals, including “9 to 5: The Musical,” “Joseph and the Amazing Technicolor Dreamcoat,” “West Side Story,” “Les Misérables” and the April presentation of “Godspell.” She lent her expertise to an hourlong Lifelong Learning discussion of the musical “Chicago” and how its creators used the “Roaring ’20s” and conventions of vaudeville to tell a wild tale of 1920s criminal justice, corruption and the “celebrity criminal.”

Her talk is available below.

Urban, who earned a bachelor’s degree in history and a master’s in public history from MTSU, explored Prohibition’s lasting impact in both the distilling industry and Tennessee during her hourlong discussion. The Cascade Hollow folks, who make George Dickel sour mash whiskey, provided participants with signature cocktail recipes to enjoy at home during the session.

Their session is available below.

MTSU’s College of Liberal Arts launched the Lifelong Learning events in 2015 to provide a new learning opportunity for the campus community and to showcase the college’s many facets.

The college offers 36 undergraduate and 19 graduate programs in the humanities, fine arts and social sciences through its 10 departments and its School of Music. Those departments include Art and Design, Communication Studies, English, Global Studies and Human Geography, History, Philosophy and Religious Studies, Political Science and International Relations and Sociology and Anthropology alongside Theatre and Dance and World Languages, Literatures and Cultures.

Liberal Arts at MTSU also houses eight centers and institutes for focused and advanced learning, including the Albert Gore Research Center, the Center for Historic Preservation, the Center for Chinese Music and Culture, the Forensic Institute for Research and Education (also known as FIRE), the Middle East Center, the Tennessee Governor’s School for the Arts, the University Writing Center and the Women’s and Gender Studies Program.

More than 2,120 undergraduates and 280 graduate students are enrolled in MTSU’s College of Liberal Arts, according to 2020 figures from the Office of Institutional Effectiveness, Planning and Research.

Because of the mixture of general courses required of all MTSU students to earn any degree, Liberal Arts teaches the greatest number of credit hours of any of MTSU’s colleges, presenting more than 75,700 class credit hours to students in fall 2020.

For more information on the MTSU Alumni Association, visit www.mtalumni.com. 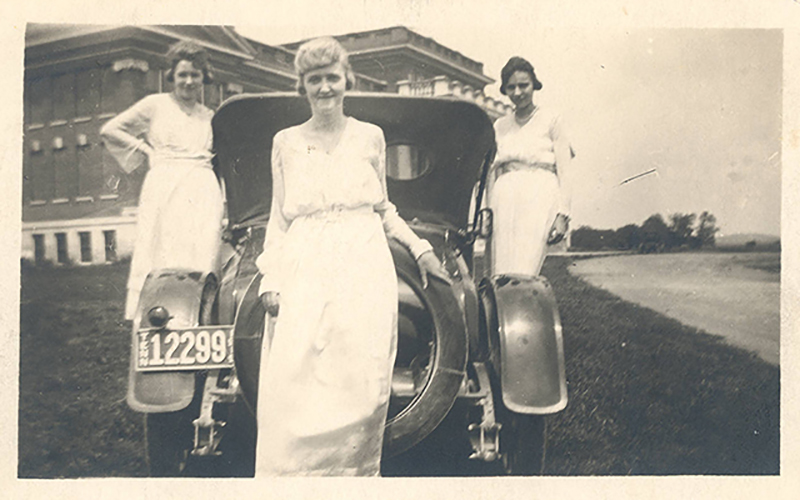 Three female students at then-Middle Tennessee State Normal School pose by a shiny roadster near the southwest corner of Kirksey Old Main in this 1920s-era photo from the Alumni Collection of MTSU’s Albert Gore Research Center. The College of Liberal Arts and MTSU Alumni Association welcomed alumni and university neighbors to join a “Roaring Twenties”-themed free online “Lifelong Learning” program discussion of life in France, American musicals, and Prohibition in Tennessee and the United States on Tuesday, May 11. (Photo courtesy of the Albert Gore Research Center at MTSU)