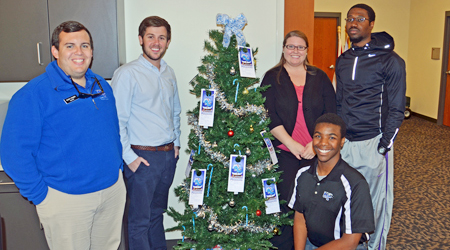 Students and staffers in the June Anderson Center for Women and Nontraditional Students are supporting the Little Raiders gift-giving campaign this holiday season. From left are Buddy Renner, a junior aerospace major from Morristown, Tenn.; Donald Abels, a graduate student in the Office of Leadership and Service from Savannah, Tenn.; Kristen Russell, a programming assistant with Fraternity and Sorority Life from Mt. Juliet, Tenn.; Jeremiah Bland, a senior physical education major from Memphis doing work-study in the June Anderson Center; and, kneeling, Zaver Moore, a senior psychology major from Knoxville and director of values for the Fraternal Values Society. (MTSU photos by News and Media Relations)

The holiday season is a time of giving, which is why a group of MTSU organizations banded together to make the season a bit brighter for local children who are less fortunate.

Three trees on campus — in the MTSU Public Safety/Campus Police Lobby, the June Anderson Center for Women and Nontraditional Students and MTSU’s Campus Recreation Center — were decorated with laminated paper “ornaments” containing a needy child’s age, gender, clothing size and wish list. Participants have chosen all the available numbered ornaments from the trees and registered as a Secret Santa.

Forbes, a community policing specialist, said the Little Raider campaign is similar to the Salvation Army’s Angel Tree concept. The MTSU effort focuses on low-income families on campus, single parents and children being served by the local domestic violence shelter.

This “ornament” shows the Christmas wish list for a local boy who will be helped through the Little Raiders gift-giving campaign this year.

“We’re going to give all the gifts out to children,” Forbes said, “basically to help the children have a nice Christmas.”

Sgt. David Smith is assisting Forbes with the project, along with Jenny Crouch, Campus Rec’s marketing and adaptive recreation coordinator, who is representing the Golden Key Honor Society, and Valerie Avent, assistant director of the June Anderson Center and the OWLs adviser.

Avent said OWLs provides “support, networking and advocacy” for nontraditional students, and one of the semester’s goals for the group, led by OWLs president Darrell Land, “is to be more involved in the Murfreesboro community.”

Crouch, co-advisor for Golden Key, said one of the primary objectives of the academic honor society is service to the community, so the Little Raiders campaign was a natural fit.

“We saw perhaps that there was a need on campus,” said Crouch, noting that several of the ornaments on the Rec Center’s Christmas Little Raiders tree have already been claimed.

“It’s Christmas, and we were all interested in providing a service to the community in a small way.”

Forbes said she’s grateful for the cooperation and assistance from other campus entities. The tree ornaments — featuring the MTSU mascot Lightning donning a Santa’s hat — are produced by MTSU Creative and Visual Services, and the MTSU Athletic Department gave its approval to use Lightning’s image on the ornaments.

“I’m hoping that we have a good response this year and this will be an annual thing that we can do … and be able to reach out more to the community,” Forbes said.

For more information about the Little Raiders campaign, please contact Forbes or Smith at 615-898-2424.