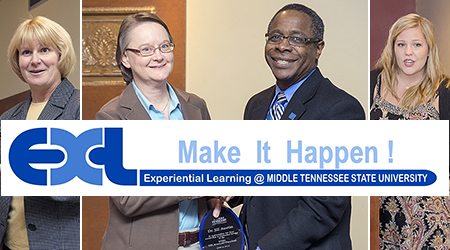 MTSU is positioning itself as a model university in this area with its Experiential Learning Scholars Program, or EXL, which was recently commended by a regional accrediting organization for its impact and effectiveness after five years of existence.

Dr. Jill Austin, left, a professor of management and marketing at MTSU, accepts thanks at a recent reception from university President Sidney A. McPhee for her dedication to the Experiential Learning Program. (MTSU photos by J. Intintoli)

MTSU President Sidney A. McPhee spoke to a proud group of faculty and staff at a recent campus reception honoring those involved with the birth of the program, which started in spring 2006 as a pilot project in conjunction with MTSU’s Quality Enhancement Plan.

The EXL program formalizes and organizes several existing experiential learning activities into a comprehensive program of study for students. At the end of the five-year review period, the Southern Association of Colleges and Schools rewarded MTSU with the following commendation:

“The institution adequately addressed all required elements of the QEP Impact Report, and its assessment efforts are to be applauded. The ‘Experiential Learning Scholars Program’ would serve as an excellent model for institutions considering a similar project.”

“What’s most impressive is the sustainability of that excellence,” McPhee told the group at the Nov. 15 reception at the James Union Building.

In recent weeks, McPhee added, he received an email from SACS President Dr. Belle Wheelan, again asking to showcase MTSU’s program during an upcoming membership meeting “as a model program for institutions to look at and see how to do it.”

McPhee pointed to the growing interest in EXL courses on campus, noting that more than 5,000 students enrolled in EXL classes during the 2011-12 academic year. About 150 students graduated as EXL Scholars that year, too.

“What is so neat about this program is that it shows how you can merge academic and service learning in a way that is not only beneficial to the community, but is substantive and it is something that students see a value you in and respond to,” McPhee said.

Dr. Jill Austin, who served as chair of the committee that launched the EXL program, emphasized that “it took everyone’s involvement to make this project happen” — the collective cooperation of faculty, staff, students and community members.”

The initial idea of “experiential learning” was one that drew consensus from the start.

“We had no idea what that meant at that time, but from the beginning, we were all moving in the same direction,” said Austin, who is a professor of management and marketing at MTSU. “We thought that we could change the culture of learning at MTSU and get students more engaged in the learning process.”

Students were deeply involved in the program development from the outset, even developing the logo and “Make it happen!” motto still in use today. Throughout the reception, a slideshow displayed numerous EXL community service projects involving students, ranging from Habitat for Humanity builds to ecological restoration at the Stones River Battlefield to a family wellness fair at Hobgood Elementary School.

“Students feel like they’re more confident in all kinds of ways because of EXL,” Austin said. “They feel like their leadership skills are better than if they hadn’t had an EXL experience — their planning skills, their organizational skills, their ability to work with lots of people and people who are different from them. The list could go on and on.”

“Students really do learn by doing. Their lives can be changed. They really see possibilities that they didn’t see before,” she said.

MTSU had 54 EXL faculty members at end of its first year. That number had more than tripled to 173 by the end of the 2011-12 academic year, but Austin said she wants more participation because of the positive impact the program can have on faculty members.

“I would like to have 700,” Austin said, drawing supportive laughter from those in attendance.

Aimee Hawtrey Sipe, an MTSU EXL Program alumna, speaks about her experiences as both a student and as a professional at a recent reception honoring those involved with the service-learning program.

EXL Director Carol Swayze said she expects the program to continue its growth and sees the SACS commendation as confirmation that MTSU is on the right track.

“We are fortunate to have such an exceptional team of faculty, staff and community partners who are providing a top quality educational experience for our students,” she said.

“This honor is truly a reflection on the quality of work performed by the founding committee and speaks to the dedication of MTSU to student success. The program continues to grow each semester as more students discover the value of experiential learning and the EXL Scholar Designation.”

“Right away, I made all of my classes EXL, because they were EXL in the first place,” she said. “Then I went to each of my colleagues and said, ‘Please get on board with this. We can do something with this.’”

McCormick shared an example of EXL’s application in which one of her classes recently used an upcoming job fair on campus to practice experiential learning.

“I said, ‘We can either read about recruiting, or we can do recruiting in preparation for the recruiting fair,’” she said.

McCormick had her students set up mock companies in the classroom so classmates could visit and practice doing interviews. All the students visited each table to polish their interviewing skills.

Aimee Hawtrey Sipe, an EXL Scholars alumna and now a community partner through her work with the nonprofit Both Hands Foundation, told the crowd about how, through her EXL coursework, she basically created a full-time job for herself at a pizza parlor because the owners were so impressed with her work.

She later navigated an extensive interview process with Both Hands, a Nashville-based organization that assists orphans, widows and adoptive families.

She got the job and credits the multitasking skills she learned during her EXL courses as critical in enhancing her effectiveness and efficiency at a nonprofit with limited staff. Both Hands now makes use of interns through the EXL program.

You can read about an example of a current EXL project at mtsunews.com/exl-anti-bullying.