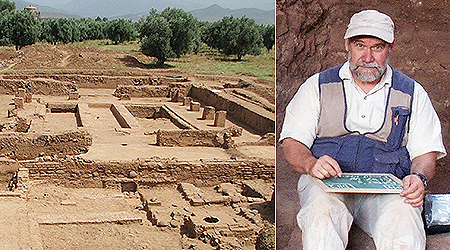 Dr. Ron Messier rests for a moment during an archaeological dig outside Marrakech, Morocco, in this 2008 photograph. (photo courtesy of Ron Messier)

The Moroccan-American Commission for Educational and Cultural Exchange bestowed a high honor on an MTSU professor Nov. 29 in Morocco.

Dr. Ron Messier, a professor emeritus of Middle East history and historical archaeology and former director of MTSU’s University Honors Program, is one of only two Americans to receive an award from the binational commission that administers the Fulbright Program in Morocco.

The ceremony was held at the Centre d’Accueil Mohammed VI in Medinat al Irfan, the university and studies center located below Agdal, a suburb of Morocco’s capital city of Rabat.

The commission, which is celebrating its 30th anniversary, is funded by the Kingdom of Morocco, the United States and private-sector donations. Its mission is to facilitate “academic and cultural exchanges between American and Moroccan citizens,” according to its website, www.macece.org.

Messier’s invitation stated that he was being honored because “you and your work in Morocco [over the last 40 years] exemplify … the spirit of traditional friendship uniting the people of the two countries.”

Vanessa Paloma, a Sephardic singer and researcher who specializes in Jewish women’s oral traditions, especially in Morocco, was the only other American to receive the award. Two Moroccans also were recipients.

“We’ve heard so many times people say, when they receive an award or honor, ‘I am deeply honored and humbled,’” said Messier. “Now I know why they say it. I can truly say that I am both.”

The professor first went to Morocco in fall 1969 to do research for his doctoral dissertation on the circulation of gold currency in the medieval Mediterranean world.

“When it came time for me to do field work, Morocco was an easy choice,” said Messier. “The program I was in already had a good working relationship with Morocco. The university even owned an apartment in Rabat available to graduate students.

This view of the hammam, or spa-like steam room, at the site of the Aghmat Palace shows a portion of the ancient Moroccan capital city Dr. Ron Messier has worked to excavate. (photo courtesy of www.Yacout.Info)

“So, off to Morocco I was with my family. Then, it was clear that Morocco was such a great place to work, the question became, from then on, ‘Why go anywhere else?’”

Messier became interested in the city of Sijilmasa, a city mostly buried under the Saharan sand, because of its role in the gold trade. From 1988 through 1998, he directed an archaeological excavation of the city — work that will be detailed in Sijilmasa: The Last Civilized Place, a book to be released in 2013.

Messier also began excavating Aghmat, a 9th-century capital city in southern Morocco, which was replaced in the 11th century by construction of a new capital in Marrakech. In both endeavors, he has worked with Moroccan officials and archaeological professionals and trained dozens of Moroccan archaeological students, many of whom are working now in various Moroccan governmental agencies and academic institutions.

In recent years, Messier has worked in Morocco and elsewhere on issues of Christian-Muslim dialogue, culminating in his book Jesus: One Man, Two Faiths — A Dialogue between Christians and Muslims.

Messier, who taught at MTSU from 1972 to 2004, won the university’s Outstanding Teacher Award in 1976, Outstanding Honors Faculty Award in 1978 and Outstanding Research Award in 1997, as well as the Council for the Advancement and Support of Education Award as Tennessee Teacher of the Year in 1993.