After decade away from classroom, student veteran ...

After decade away from classroom, student veteran nears degree with new outlook 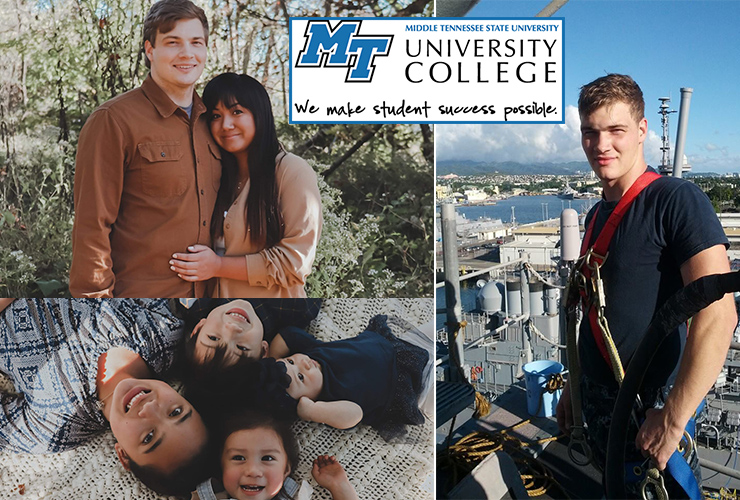 A United States Navy veteran will graduate in December after returning to MTSU to finish his degree.

Logan Stepp, who graduated high school and originally attended MTSU in 2009, returned to college nearly a decade later to earn his bachelor’s degree in Professional Studies with a concentration in information systems technology through University College.

Stepp said he was simply not ready for higher education when he made his first stop at MTSU. He says the Navy not only rectified that problem but also afforded him the ability to attend MTSU again.

“The military taught me the importance of that and how to do all that.” 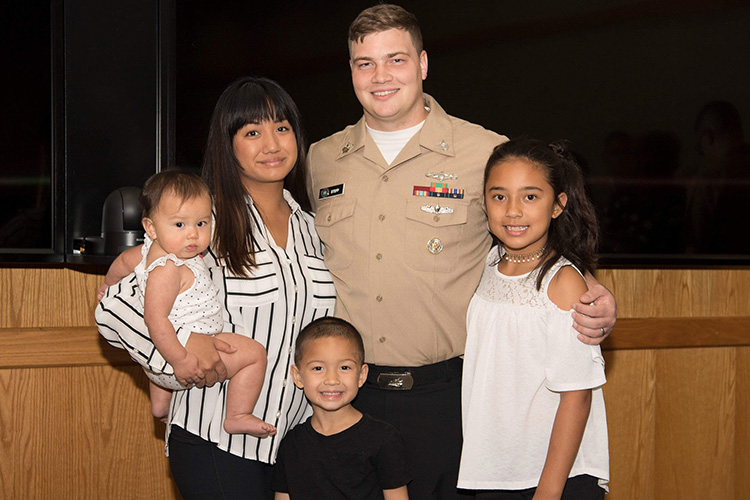 MTSU senior and U.S. Navy veteran Logan Stepp, left, is pictured with his wife, Zsarel, and three of their four children in this undated photo. Stepp, who graduated high school and originally attended MTSU in 2009, returned to college nearly a decade later and is set to earn his bachelor’s degree in Professional Studies with a concentration in information systems technology in December through University College. (Submitted photo)

Stepp, now 30, was in the Navy for seven years, a large portion of that spent in Hawaii. He actually met his wife, Zsarel, while at Pearl Harbor. Now, the two are raising four kids between 1 and 12 years old back in La Vergne.

He said he joined the Navy after dropping out of MTSU and exploring vocational school and trying out plumbing. He and a good friend made a pact to join the Navy together and stick together as long as they could.

“We made the deal,” Stepp said, laughing. “He ended up in a submarine and I was on the surface.”

In the Navy, Stepp was an information systems technician doing database imagery and operational planning. He also took classes that he used to earn college credit once he decided to return to MTSU. 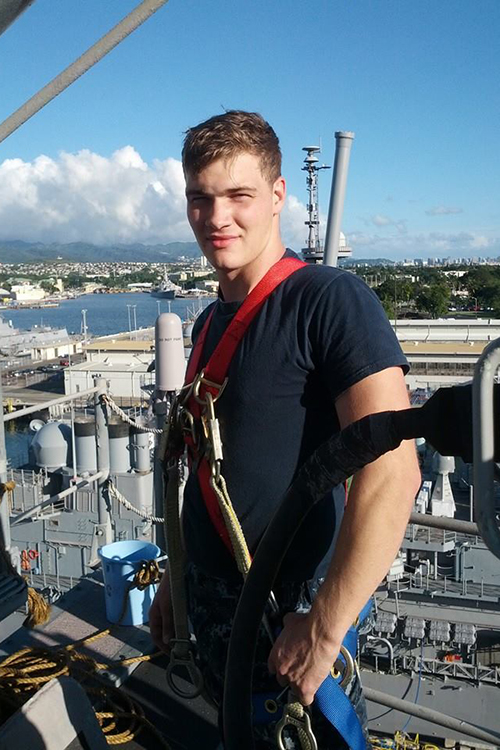 MTSU senior and U.S. Navy veteran Logan Stepp, now 30, was in the Navy for seven years, a large portion of that spent in Hawaii. He met his wife, Zsarel, while at Pearl Harbor. (Submitted photo)

“It was the best decision I ever made,” he said. “Not only does the Navy set you apart from your peers, but it is personal growth and you continue to progress in your career and in every other aspect of your life.”

Stepp said when he returned to MTSU he saw higher education through a totally new lens, and everything was different the second time around. He says he was anxious, but that changed quickly.

“I went and sat down and talked to other people in the class,” he said. “And they were in a different mindset than I was at their age. It’s something that made me feel immediately more comfortable.”

He says it was clear that everyone in his classes was at MTSU to learn. He noticed his younger classmates respecting and listening to their professors, which was not something he saw the first time.

“The fact that academic integrity is intact at MTSU, and there is an understanding of trust and respect, is huge,” he said.

When it came time to choose a major, Stepp said the Professional Studies program was the perfect fit.

“It provides a wonderful foundation for learning in any discipline. I now feel like I can participate in the intellectual discourse no matter the industry.”

The program is specifically designed to appeal to a broad spectrum of people, especially adults who have varying backgrounds and experience in the workforce.

“I didn’t want to be put into a box,” Stepp said. “Professional Studies stuck out to me because it was interdisciplinary.” 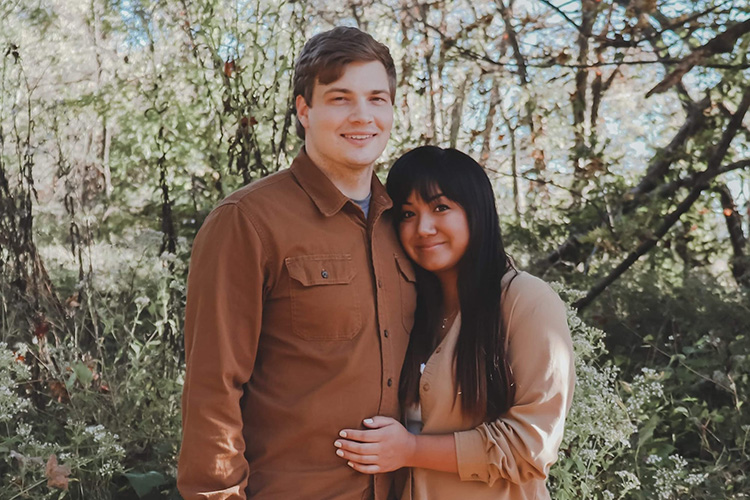 MTSU senior and U.S. Navy veteran Logan Stepp, left, is pictured with his wife, Zsarel, in this undated photo. Stepp, who graduated high school and originally attended MTSU in 2009, returned to college nearly a decade later and is set to earn his bachelor’s degree in Professional Studies with a concentration in information systems technology in December through University College. (Submitted photo)

Since Stepp last attended MTSU, the university’s technology has progressed immensely with nearly all courses using an online component in class. Whether it’s online discussion forums or quizzes, professors are using online tools to take advantage of more time for learning in the classroom.

“I think that helps us maximize learning in the classroom since professors can spend more time teaching their courses instead of proctoring quizzes,” he said.

Stepp also talked about the support system MTSU has created for its students and especially veterans.

“A lot of the problems I ran into, the veterans center and my advisers jumped on,” Stepp said of the Charlie and Hazel Daniels Veterans and Military Family Center. “The level of support on the administrative side is unbelievable.”

The center is a one-stop-shop to meet a wide range of academic, career and social needs for student veterans and their families. It is designed to be a place where veterans can connect with other veterans, ask questions, and find help navigating a successful transition to the civilian workforce.

“I’ve been blown away by MTSU,” he said. “If more people knew what the Veterans Center was doing, they’d be wondering why there aren’t more of them around the country.”

To learn more about MTSU’s programs for adults returning to school, visit MTSU.edu/FinishNow or contact them at 615-494-7714. 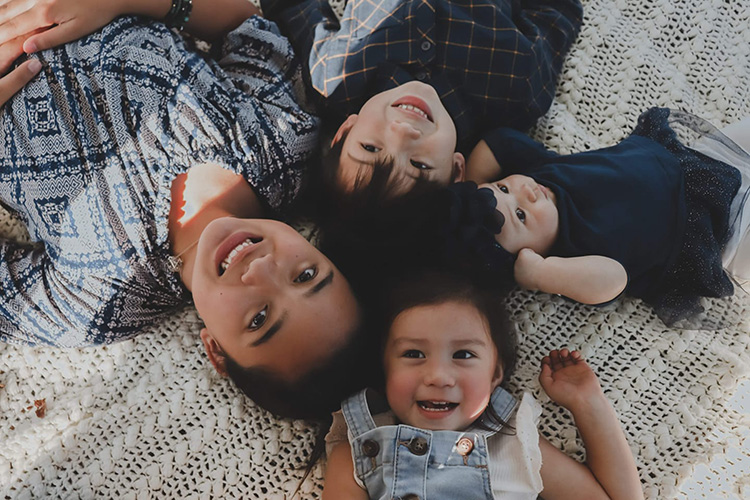