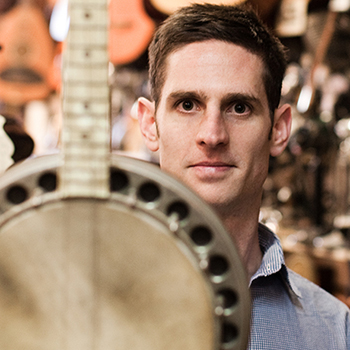 Stone, a banjoist, composer, producer and self-described “instigator,” is bringing The Lomax Project to MTSU Wednesday, Sept. 30, for a free public workshop and concert that showcases, revives and reimagines the traditional music of North America.

The 1 p.m. student workshop in Hinton Music Hall, located inside MTSU’s Wright Music Building, and the 7:30 p.m. concert in the Keathley University Center Theater focus on the songs collected by folklorist and field recording pioneer Alan Lomax over a 70-year period.

A searchable campus parking map is available at http://tinyurl.com/MTSUParking2015-16. Off-campus visitors attending the afternoon workshop should obtain a special one-day permit from MTSU’s Office of Parking and Transportation at www.mtsu.edu/parking/visit.php.

The Lomax Project has released a critically acclaimed album that includes their versions of historic songs like “Lazy John,” “Shenandoah,” “Sheep, Sheep Don’tcha Know The Road,” “I Want To Hear Somebody Pray” and “Bury Boula for Me.”

The project also is a traveling show, offering educational programs and outreach activities for K-12 schools, universities and the public.

You can learn more about The Lomax Project and get two previews of their work below.

“The aim is to create a process that taps each of our musical trees, harnesses the unexpected chemistry of collaboration and makes music that’s informed by tradition but not bound by it,” Stone said.

“The Lomax archive provides an outstanding opportunity to explore diverse cultural traditions. Music that is close to home will serve to connect participants with their own heritage, history, lore and ancestry, while traditions from afar will help participants open to new sounds and stories from other corners of the globe.”

MTSU’s Center for Popular Music is presenting the Lomax Project events. They’re co-sponsored by the Tom T. Hall Writers Series in the College of Media and Entertainment at MTSU, the MTSU School of Music and the Virginia Peck Trust.

For more information, visit the Center for Popular Music’s website at www.mtsu.edu/popmusic.

Four of the core members of The Lomax Project, set to present a free workshop and concert Wednesday, Sept. 30, at MTSU, include, from left, Grammy-winning multi-instrumentalist Tim O’Brien, singer and accordionist Moira Smiley, singer and guitarist Margaret Glaspy, and banjoist/composer Jayme Stone, the project’s “instigator.” (Photo by Lindsay McWilliams)