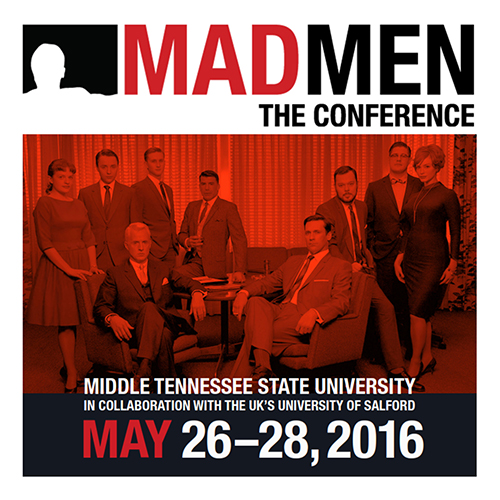 Presenters from 16 states and 10 foreign countries will convene on the MTSU campus May 26-28 for “Mad Men: The Conference,” a scholarly meeting focused on the groundbreaking AMC network program.

White will give a talk on “Mad Men and Women: Quandaries of a Feminist Critic” at 9 a.m. Friday, May 27, in Room 221 of the McWherter Learning Resources Center on the MTSU campus, and Zoller-Seitz will present “American Carousel: The Personality and History of Mad Men” at 9 a.m. Saturday, May 28, in Room S102 of the Business and Aerospace Building.

These two keynote lectures are free and open to the public. Visitors who want to attend the entire conference may register on-site and pay a $50 per person fee. A searchable campus map of MTSU, complete with parking details, is available at http://tinyurl.com/MTSUParkingMap.

Sponsored by MTSU’s College of Media and Entertainment and the College of Liberal Arts, MTSU professors David Lavery and Jane Marcellus are the conference organizers, along with Drs. Kirsty Fairclough-Isaacs and Michael Goddard of the University of Salford in Manchester, England.

Lavery is well-known for his work on Joss Whedon, creator of “Buffy the Vampire Slayer,” and organized a conference on Whedon’s work last year at MTSU. Marcellus is a co-author of “Mad Men and Working Women,” a book on Mad Men and gender, and Fairclough-Isaacs and Goddard are media scholars at the University of Salford.

Fairclough-Isaacs told the BBC that “Mad Men” merits critical analysis by academics because “it considered recent U.S. history through the prism of advertising in such a fresh way. Its depictions of gender politics, racial bias and the beginnings of counterculture are particularly significant.”

For more information about the conference, visit http://madmentheconference.com. You also can hear Lavery’s comments on the upcoming edition of “MTSU On the Record” that airs this Sunday, May 22, from 8 to 8:30 a.m. on WMOT-FM (89.5 and www.wmot.org ).