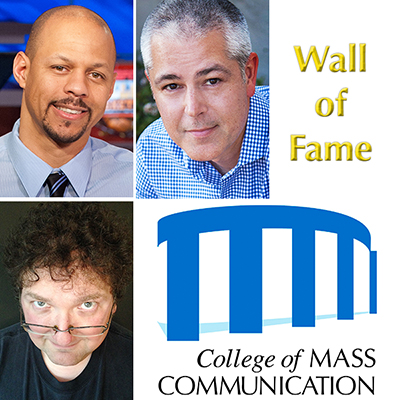 Top students past and present were the focus of MTSU’s College of Mass Communication April 24 awards ceremony as leaders added three prominent alumni to the college’s “Wall of Fame” and presented student scholarships and awards for this academic year.

The program for the celebration, which includes a complete list of all student honorees as well as full bios of the Wall of Fame inductees, is available here.

The Wall of Fame honor began in 2000 as a way to honor successful mass-communication graduates and inspire current students to continue working toward their goals. Each of the college’s three departments submits an honoree for consideration each year, and the Wall of Fame ceremony then becomes a part of the college’s annual awards day for students.

Harkness, currently a director for ESPN, began his broadcasting career during his senior year at MTSU, 1993, when he began working as an intern for WKRN-TV in Nashville. Since then, he’s won five Emmy Awards for his news, special events and technical direction.

The Harriman, Tennessee, native’s ESPN credits include “Sport Center,” “Mike and Mike,” “NBA Tonight,” “The Herd” and “SVP & Rusillo,” and in 2014 he directed the launch for ESPN’s new SEO Network in Charlotte, North Carolina, where he continues today.

Privette, a 1997 recording industry graduate, has spent most of his career with Yamaha Corp. of America, where he’s moved up the ranks from an award-winning district sales manager in the Pro Audio and Combo Division to serve as director of the company’s Steinberg North America department.

Ridley, a Murfreesboro native who earned his MTSU journalism degree in 1989, was writing movie and book reviews for local newspapers even before he graduated high school. His talent led to a freelance film-reviewing job for the fledgling alternative weekly Nashville Scene and regular contributions to The Village Voice, L.A. Weekly, Variety and other publications.

The Scene soon brought Ridley on full time, where he rose to the positions of senior editor and managing editor before the publishers named him editor in 2009.

During the afternoon event inside MTSU’s James Union Building, MTSU’s School of Journalism also honored Sharon Fitzgerald with its top teaching award, the Ed Kimbrell Excellence in Teaching Award. Fitzgerald, a former reporter and public relations professional, has taught at MTSU since 1999.