‘Create some luck for yourself.. 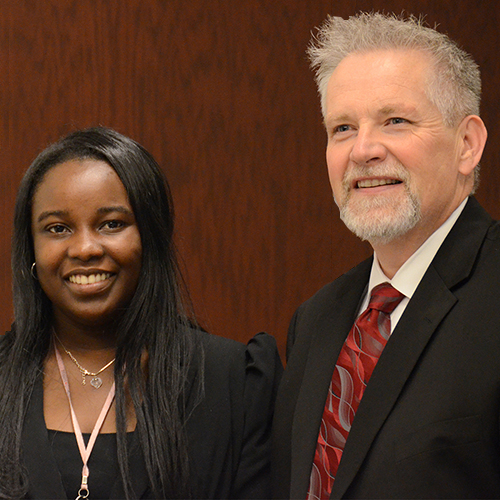 Wilhelmina Dabrah, left, and Dr. Vincent Smith participated in the Aug. 15 MTSU Master of Science in Professional Science internships presentations. Dabrah, who graduates Aug. 17, will earn her master’s degree in actuarial science. She performed her internship with the Tennessee Department of Commerce in Nashville. Smith serves as business core coordinator for the program. (MTSU photos by News and Media Relations)

Two years ago, at the tail end of the downsizing of the economy, Sean Little returned to MTSU, where he had earned his bachelor’s degree in microbiology and psychology.

This time, it was for graduate school and the pursuit of a master’s degree in biotechnology.

Through the process, Little learned about the MTSU’s Master of Science in Professional Science program and its three-month internship possibilities.

Little, 40, a Smyrna, Tenn., resident who will graduate Saturday, Aug. 17, landed an internship with Taylor Farms in Smyrna.

“It gives you practical work experience,” said Little, who was one of 17 current students in the Master of Science in Professional Science program who will graduate Saturday.

“I was actually on the floor hand-in-hand with other employees, and supervised some employees. It was an amazing experience. Where do you get that?”

Little said Taylor Farms’ operation in Smyrna is a processing facility. The company, which provides prepackaged salads for Walmart, Kroger, Target, McDonald’s, Taco Bell and others, has seven facilities in the U.S. and one in Mexico.

In the food service industry for much of his career and currently helping manage a Nashville restaurant, Little said he “is in discussion” with Taylor Farms for a full-time position.

Little said it was the first program he has seen “that marries business and science.”

Two of his classmates, Zeda Li and Timothy Adekoya, will pursue doctoral degrees.

Li, a native of Changsha, China, now living in Murfreesboro, will attend Temple University in Philadelphia. He majored in biostatistics and performed his internship with Vanderbilt University Medical Center in Nashville.

“This program was my first step into a statistical area,” he said, adding that he had earned a bachelor’s degree in electrical engineering from MTSU.

Adekoya, a native of Ogun State in Nigeria now living in Murfreesboro, will attend North Carolina Central University in Durham.

“This has been an eye-opener,” Adekoya said of the master’s program. “It presented a platform for my future ambition at becoming a researcher and academician.”

College of Basic and Applied Sciences Associate Dean Saeed Foroudastan, who also serves as director of the master’s program, said half of the students “already have taken jobs at their place of internship.”

Each made internship presentations Aug. 15 in the Cason-Kennedy Nursing Building.

Summer 2013 Master of Science in Professional Science students take a break for a photo while making internship presentations in the Cason-Kennedy Nursing Building Aug. 15.