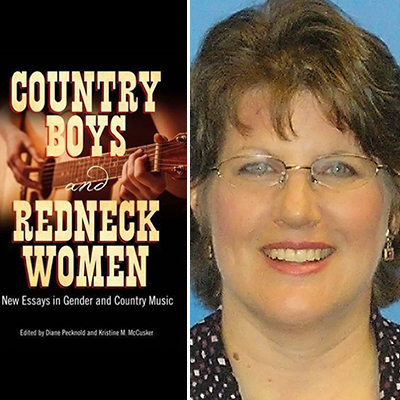 A recent “MTSU On the Record” radio program explores how gender in country music is about much more than simply “honky-tonk angels.”

Host Gina Logue’s interview with Dr. Kris McCusker, a professor of history at MTSU, first aired March 28 on WMOT-FM (89.5 and www.wmot.org ). You can listen to their conversation below.

McCusker is co-editor, with Dr. Diane Pecknold of the University of Louisville, of “Country Boys and Redneck Women: New Essays in Gender and Country Music,” a collection of analyses on gender identity within the genre from a variety of academic perspectives.

The topics addressed in the book include gender in songwriting; the credibility of Taylor Swift; the impact of Kitty Wells, Loretta Lynn and Dolly Parton; gender in country music in Brazil and Australia; and the female inmates of the Texas State Prison who performed on the radio from 1938 to 1944.

“Country music may seem never to change, but that’s the point,” said McCusker. “Country music sells itself as being unchanging so it can do a lot of changing when nobody really notices it.”

“Country Boys and Redneck Women” is the follow-up to McCusker’s and Pecknold’s 2004 collaboration, “A Boy Named Sue: Gender and Country Music.” That collection was the first book-length effort to examine how gender conventions, both masculine and feminine, have structured the creation and marketing of country music.