MTSU departments and personnel were recognized March 26 for the university’s support in preserving and reviving the building that now houses Bradley Academy Museum and Cultural Center.

This year’s annual Willie McGowan Banquet in support of the museum celebrated a special milestone in the efforts of many to preserve Rutherford County’s first school for African-American students.

With a theme of “Honoring the Legacy of Our Unsung Heroes,” this year’s banquet spotlighted the 20th anniversary of the successful movement to preserve and restore a building that embodies the foundation of education in the city of Murfreesboro and Rutherford County. 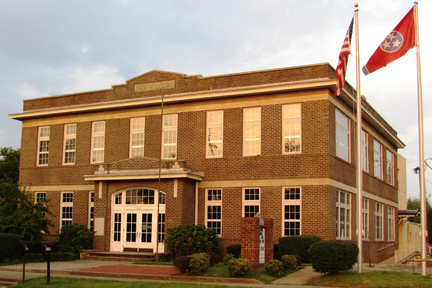 MTSU departments and personnel will be recognized at the March 26 Willie McGowan Banquet for the university’s support in preserving and reviving the building that now houses Bradley Academy Museum and Cultural Center on South Academy Street in Murfreesboro. It was the first school for African-American students in Rutherford County. (Photo courtesy of the city of Murfreesboro)

“It’s important that we honor those who have done so much to preserve Bradley’s legacy for future generations,” said MTSU’s Dr. Gloria Bonner, a longtime Bradley supporter who was keynote speaker at the 2015 banquet.

“This museum is truly a community treasure, and we want the community to join us in this celebration.”

The annual event was held at the James Union Building on the MTSU campus and featured dinner, a keynote speaker and special presentations to select Bradley supporters. A free pre-celebration wine and cheese event was held March 25 at the museum, located at 415 S. Academy St., and featured jazz music, local artists’ displays, a video presentation about the museum and self-guided tours.

James Oscar Simmons of Florida served as keynote speaker for the event. A Rutherford County native and graduate of the Holloway High School Class of 1953, Simmons is the retired president and founder of the Pinellas County Urban League in St. Petersburg, Florida, a position he held for almost three decades.

In recent years, Simmons has also been instrumental in opening a number of charter schools in Florida to help at-risk youth earn their high school diplomas.

Other banquet honorees included the Rebecca Carney Temple No. 798 and the E.A. Davis Elks Lodge No. 1138; Shacklett Photography, represented by Bill Shacklett and Gloria Shacklett Christy; and the Christy-Houston Foundation, represented by Bob Mifflin.

The original Bradley Academy was a log structure built in 1809 on land donated by the Murfree family near the Stones River.

President James K. Polk was the most notable student at the private school, which relocated to South Academy by the 1830s and later served as a hospital site during the smallpox epidemic of 1836 and during the Civil War. It closed in 1848 before reopening in 1884 as a school for black students.

The current two-story brick structure was built in 1917-1918 and featured eight classrooms, running water and electricity.

The school closed again in 1955 in the wake of the Brown v. Board of Education decision, and after being used for office space and storage for a time, fell into disrepair and faced demolition.

That’s when the late Willie McGowan, known as the “Father of the Bradley Academy Historical Association,” spearheaded a movement by former students, teachers and community supporters to restore the abandoned building.

Former Bradley board member Fred Beneby, a retiree now living in south Florida, was among those instrumental in helping establish the nonprofit BAHA, which was chartered to help the building land a spot on the National Register of Historic Places, a feat achieved in 1990 with the help of MTSU’s Center for Historic Preservation and Department of History.

By 1996, with the help of federal grants facilitated by then-Congressman Bart Gordon of Murfreesboro, Bradley was restored.

McGowan’s grandson, Jason R. McGowan, is proud of his grandfather’s legacy and said he wants to do everything he can to increase awareness about the building’s importance as a black history treasure and expand its use as a place for community events and educational activities.

“Bradley is much more than a building,” McGowan said. “It’s a vital link to our history to which younger generations must be exposed.”

The building now serves as a cultural museum with permanent historical exhibits, a restored classroom, office space and meeting space for community events. The city of Murfreesboro’s Parks and Recreation Department has taken over day-to-day operations of the facility.

Ron Washington, a City Council member and MTSU alumnus, led the effort to move Bradley’s operations beneath the Parks and Recreation Department umbrella, a transition he said was critical to maintain the museum’s long-term viability.

“Bradley is deeply special to me and many others in this community,” Washington said. “The city’s support of the museum’s operations will only boost its presence and profile as a historical jewel in this region.”

For more information about the MTSU Center for Historic Preservation, visit www.mtsuhistpres.org. For more about the Department of History, visit http://mtsu.edu/history.