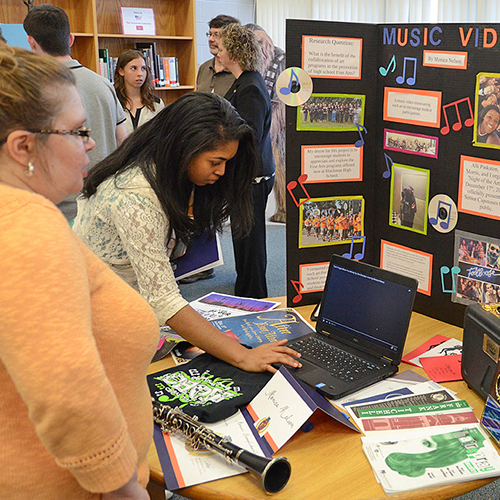 Blackman High School’s library and rotunda buzzed with activity recently as 24 of the school’s high-achieving seniors showcased their research projects to the public as part of the inaugural class of the Blackman Collegiate Academy.

A unique partnership with MTSU, the academy seeks to better prepare Blackman students for the rigors of higher education.

Juniors and seniors in the academy who meet eligibility standards can to take up to six hours of university courses taught by MTSU instructors at no cost. Credits will count on high school and college transcripts.

Blackman High senior Christine Monchecourt stands next to her research project display about the “safe driving week” she created at the school as part of the inaugural Capstone Gallery Walk held for Blackman Collegiate Academy students on March 22 in the school’s library and rotunda. Monchecourt plans to attend MTSU in the fall. (MTSU photos by Jimmy Hart)

Blackman High Principal Leisa Justus, who was all smiles as she surveyed the students’ project displays, said the March 22 inaugural Capstone Gallery Walk represented the culmination of the graduating seniors’ research in their chosen areas of study, ranging from information technology to math and science to performing arts.

That research also needed to be connected with a community service project, resulting in a wide variety of efforts and interests, including:

“This was exactly the vision,” Justus said. “To see students do something beyond their wildest dreams of what they could achieve, and see them do it with style and grace and confidence. They’re ready … and they’re going to impact others around them when they get to a college campus.”

MTSU’s support has been critical, she added, noting that university coordinated a campus tour for academy students, opened its writing lab to help students complete their research papers, provided students access to other campus facilities and provided mentors to assist some of them with their projects. In addition, the courses are taught on Blackman’s campus in west Murfreesboro.

“MTSU has been amazing in what they’ve offered us,” said Justus, who signed the partnership with MTSU President Sidney A. McPhee and Rutherford County Schools Director Don Odom in January 2015.

MTSU is able to offer the six credits at no cost to students thanks to a state dual enrollment grant and a new dual-enrollment rate approved by the Tennessee Board of Regents. The courses offered target core curriculum that would apply to most majors, and credits can apply to MTSU or another university of the student’s choice.

Dr. Debra Sells, vice president of student affairs and vice provost for enrollment and academic services, stopped by the gallery walk to congratulate the students for their work. Academy students boast an average ACT score of 27.57, an average GPA of 3.8 and a total of almost $2 million in scholarship money.

“The student’s research projects were very impressive and show they are well on their way to having successful college experiences,” Sells said. “And of course it was gratifying to see that many of these scholars have decided to pursue their degrees at MTSU.”

For her capstone project, senior Christine Monchecourt tackled distracted driving. Standing next to her display that included mounted toy cars, graphics of driving statistics and her research methodology, she explained how she created a “safe driving week” at the school that focused on combating distractions such as texting and driving.

Monchecourt, who plans to attend MTSU in the fall to study actuarial science, said she surveyed students, analyzed government data and provided videos to students to raise awareness of the issue. She also had students sign a pledge to stop texting and driving.

“It’s a huge issue in the United States,” she said, adding that her survey showed that half of Blackman students admitted to texting and driving.

“And a lot of the times, driving distractions are not recorded, and it needs to be reported when teens get into accidents so that we can better understand the issue.”

Her own understanding grew from the hard work required to complete the project.

“It really pushed me and helped me put myself more into a college (mindset),” said Monchecourt, who also takes dual-enrollment courses for college credit.

Nearby, fellow senior Takashi Terauchi explained how he researched and proposed ways that the school’s lunch line process could be changed to:

Terauchi, who plans to attend Purdue University in the fall to study industrial engineering, said he’s pleased that the cafeteria has been receptive to his findings and has already implemented some of the suggestions stemming from his research.

“It was new to me. I gained experience for what college will be like,” he said of his capstone project. “I feel like I gained a head start.”

Justus noted that the students first had to defend their research to a faculty panel in December, “just like a student would defend a thesis” in college, before their participation in the gallery walk.

“We want them to have this experience so that when they go on through their college experience, and life, they have the experience of not only researching, but implementing solutions and presenting to the public,” she said.

For more information about the academy, visit http://bit.ly/1RyxFrS.

A healthy crowd of students, faculty, staff and supporters attend the inaugural Capstone Gallery Walk held for Blackman Collegiate Academy students on March 22 in the school’s library and rotunda.