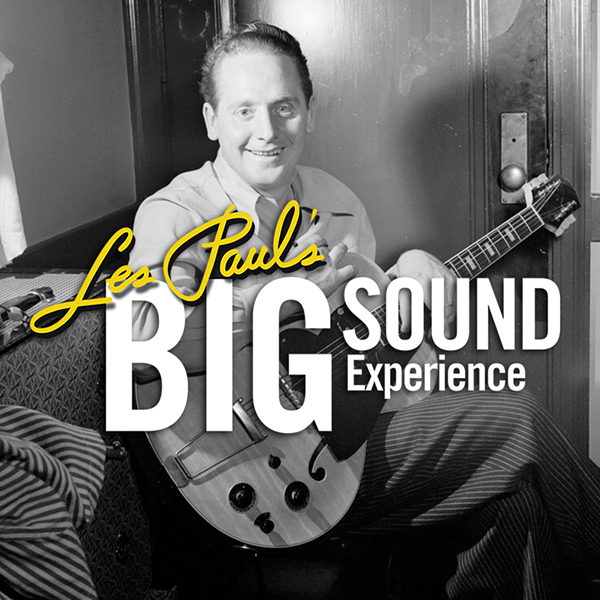 “Les Paul’s Big Sound Experience,” a 53-foot-long interactive exhibit, will visit MTSU Wednesday and Thursday, March 30 and 31, for a stop on its nationwide tour celebrating the 100th birthday of the man regarded as the father of the solid-body electric guitar.

The stop, hosted by the Department of Recording Industry in MTSU’s College of Media and Entertainment, will allow students and visitors to immerse themselves in displays on music exploration, sound and technology innovations and hands-on, interactive entertainment.

“I am thrilled that MTSU has been chosen as the host of the Les Paul Experience, which provides our students and visitors with a chance to learn about cutting-edge technology and innovations,” said recording industry chair Beverly Keel.

“Our students learn about the innovations made by Les Paul as part of their immersion into the history of the recording industry.”

The 1,000-square-foot traveling exhibit will be stationed in the parking lot between the Bragg Media and Entertainment and the Honors College buildings.

It will be open to the public Wednesday and Thursday from 10 a.m. to 6 p.m., and there is no admission charge.

A searchable, printable campus parking map is available at http://tinyurl.com/MTSUParkingMap. Off-campus visitors should obtain a special one-day permit from MTSU’s Office of Parking and Transportation at www.mtsu.edu/parking/visit.php, then park in the Rutherford Boulevard lot and ride the Raider Xpress shuttle into campus for best accessibility.

In conjunction with the Les Paul tour visit, Keel said her department has invited internationally known music industry leaders to speak at the college, including:

• Renowned guitarist Harold Bradley, a Country Music Hall of Fame member, who will speak at 1 p.m. March 30 at the Keathley University Center Theater. Bradley played on hundreds of sessions for classic hits, working with artists ranging from Elvis Presley to Willie Nelson. He will talk about guitar playing, his career and his interactions with Paul.

• Engineer and producer Chuck Ainlay, who will speak to students at 11:20 a.m. March 31 in Room 180 of the Bragg Media and Entertainment Building. Ainlay, who worked with artists ranging from Dire Straits to George Strait, has been named the Nashville Music Association’s Engineer of the Year as well as “engineer with the most top 10 hits” by Music Row magazine.

• Musician Arielle Peri, who will speak at 1 p.m. March 31 in the KUC Theater. The singer-songwriter has performed with many artists, including Cee Lo Green and Alice Cooper, become a role model for female musicians nationwide and is recognized for building her own guitars.

Keel said the Paul exhibit, along with the guest lectures, “will celebrate those who have made the music industry better, through their guitar playing, producing, engineering or technical innovations.

“While students learn about Les Paul from lectures, books and videos, this exhibit will bring their educational foundation to life and provide a better understanding of all that Les Paul did to improve recorded music,” she added. “It will also inspire them to achieve great things themselves.”

Paul, who died in August 2009, is legendary in music circles for his music and musical inventions. His development of the solid-body electric guitar helped create rock and roll’s distinctive sound.

Paul, whom Popular Science Magazine called “popular music’s Thomas Edison,” is the only person so far to be inducted into both the Rock and Roll Hall of Fame and the National Inventors Hall of Fame. The Gibson guitar that bears his name is used by artists in multiple genres.

He and his wife, Mary Ford, also had a stellar recording career in the 1940s and early ‘50s, charting 11 No. 1 pop songs, including their best-known hit, “How High the Moon.” The pair also appeared on their own TV show in the late 1950s.

Artists such as Slash, ZZ Top’s Billy Gibbons, Green Day’s Billie Joe Armstrong, Joan Jett, Jimi Hendrix and many others have paid homage to Paul throughout their careers.

To find out more about Les Paul’s Big Sound Experience, including a video on the exhibit, visit http://lespaulfoundation.org.

This visit is part of a yearlong series of special events celebrating the launch of the renamed College of Media and Entertainment. For more information about the college and its programs, visit www.mtsu.edu/media.

Music innovator Les Paul pauses for a photo, circa 1947, with his beloved “Clunker” guitar, a 1942 Epiphone Broadway that he modified with a steel bar to brace the body and hand-wound pickups. Paul’s creativity is the focus of a free interactive exhibit, “Les Paul’s Big Sound Experience,” that will stop at MTSU March 30 and 31 on a national tour. (Photo by William P. Gottlieb/Library of Congress)

Les Paul’s Big Sound Experience tour vehicle will be a Scholars Week activity from 10 a.m. to 6 p.m. March 30-31 outside the university’s Bragg Media and Entertainment Building. The event is free and open to the public. (Submitted photo)