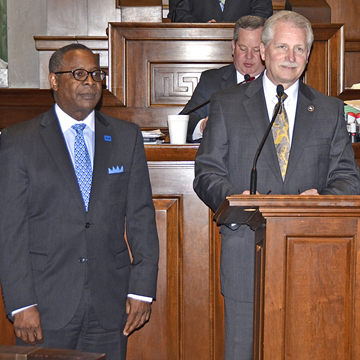 NASHVILLE — MTSU President Sidney A. McPhee was recognized Monday by the Tennessee State Senate for his efforts to expand and strengthen the university’s international partnerships and educational outreach.

Lt. Gov. Ron Ramsey welcomed McPhee and his wife, first lady Elizabeth McPhee, into the Senate chambers for the reading of a resolution, authored by state Sen. Bill Ketron, R-Murfreesboro, which lauded the president for his international work.

MTSU President Sidney A. McPhee (left), state Sen. Bill Ketron (R-Murfreesboro) and first lady Elizabeth McPhee stand in the well of the Senate chamber with state Sen. Bill Ketron (center) as the clerk reads aloud a resolution honoring the president for his international outreach. Lt. Gov. Ron Ramsey (above) presided over the Senate as its speaker. (Photo by MTSU Marketing and Communications)

Ketron, a MTSU graduate, also said McPhee coordinated and hosted numerous cultural exchanges between China and the state of Tennessee, including reciprocal visits by delegations of students, officials and artists “that have strengthened and created academic, economic and cultural opportunities for both entities.”

And, last December, McPhee was among 30 university presidents or heads of the more than 400 Confucius Institutes worldwide to receive its Individual Performance Excellence Award, known as its “Person of the Year” honor.

McPhee, in remarks to the Senate, thanked Ketron and state Sen. Jim Tracy, R-Shelbyville, for their service to Rutherford County and the region.

“I am humbled that this honorable Senate has bestowed this recognition upon me,” McPhee said of Ketron’s resolution.