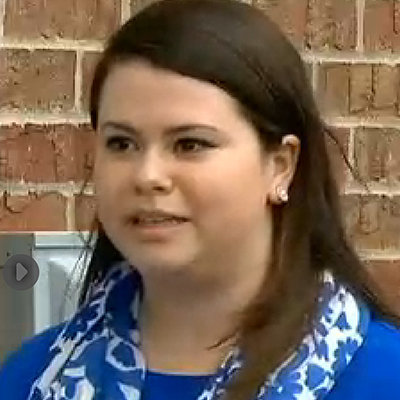 An MTSU student explained on a local newscast Monday night how she was able to help a neighbor and a pet escape a pre-dawn kitchen fire.

MTSU senior Katie Kelly told a NewsChannel5 reporter in a story airing on the 6 p.m. broadcast that she was awakened shortly after 5 a.m. April 11 by the noise of a fire alarm outside her Murfreesboro apartment.

Kelly, a newly appointed member of the MTSU Student Ambassadors, ran downstairs to a neighbor’s apartment, where she said she saw smoke “billowing out of every window” and heard a dog barking.

“It was overwhelming, but not so much so that it would stop me from doing it,” Kelly said.

You can watch the report here.

The Murfreesboro Fire and Rescue Department said in a news release that the fire, which appeared to be the result of unattended cooking, was safely extinguished by the apartment’s sprinkler system before crews arrived.

Kelly, who plans to graduate in 2015, is a native of the Memphis area and a member of numerous groups in MTSU’s School of Music, including the MTSU Wind Ensemble and Jazz Ensemble. She also has contributed to several recording projects, including Jordan Fenton’s 2013 album “Coal Mines.”

Kelly has dual majors — instrumental music performance and music industry — and a recording industry minor. She also is a private trumpet instructor and freelance performer.