MTSU President Sidney A. McPhee, in a note to the university community Friday, March 15, underscored MTSU’s standing as a destination of choice for first-generation college students and its long success in helping at-risk students who meet admission standards overcome obstacles often posed by tuition and fees.

McPhee’s message followed an announcement by the University of Tennessee System that students eligible for Pell Grant aid — with a family income of $50,000 or less — and who qualify for the HOPE Lottery Scholarship can attend one of its institutions without paying tuition or mandatory fees.

“I’m proud to say that MTSU students in this category have attended our institution for years without paying tuition or mandatory fees,” McPhee said. “Our admissions and financial aid teams are among the best at helping our at-risk students qualify for the full range of federal and state scholarships and assistance.”

“That’s why we are a destination of choice for first-generation college students,” McPhee said. “And we’ve done all of this while raising our admissions standards and setting records on average ACT scores of our incoming freshmen.”

He said MTSU’s full-time undergraduate tuition and fees of $9,206 for the fall 2018 and spring 2019 semesters remain the lowest of the state’s three largest universities. The University of Tennessee-Knoxville charges $13,006, while the University of Memphis charges $9,701.

“Our affordability makes MTSU more accessible to students from all income levels seeking a top-tier educational experience,” he said.

The president noted that MTSU also recently “substantially increased the value and broadened eligibility of our Presidential Scholarship, which more than doubled the amount we awarded to some high-ability freshmen who will enroll this fall.

“We at MTSU are pleased that UT has joined our university in expressing its commitment to serving the higher education needs of the state’s at-risk students,” he said. 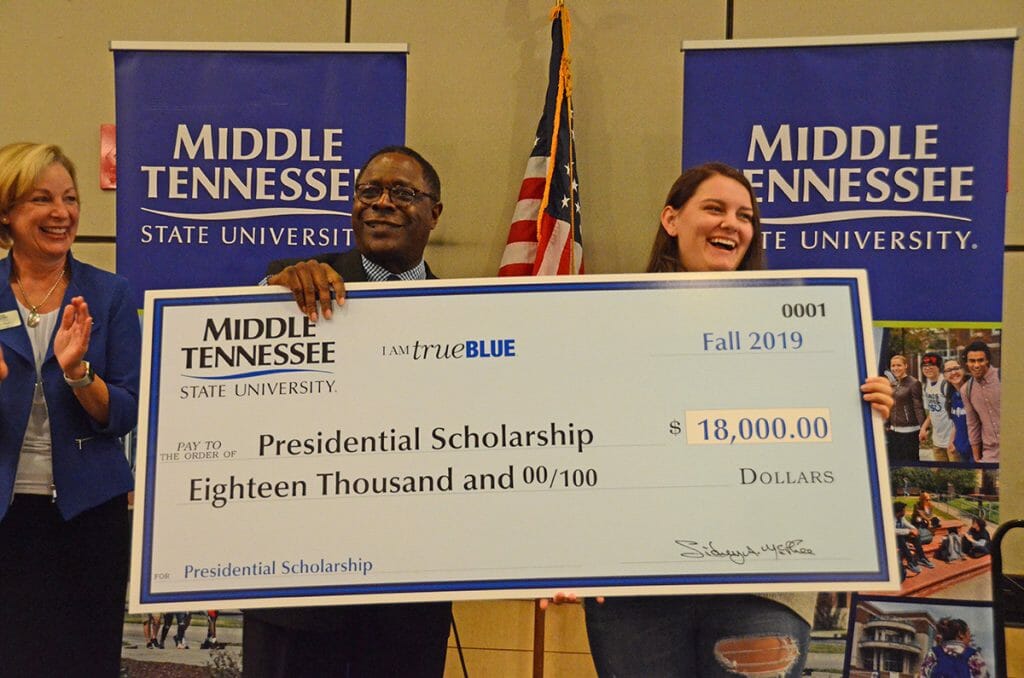 MTSU President Sidney A. McPhee, center, and Paige Dunny, a senior at Soddy-Daisy High School, hold an oversized check for $18,000, or $4,500 per year for four years, for a Presidential Scholarship she will receive for meeting updated qualifications to attend MTSU. The presentation occurred Oct. 16 during the MTSU True Blue Tour visit to Chattanooga, Tenn. Also pictured at left is Linda Olsen, MTSU undergraduate admissions director. (MTSU photo by Randy Weiler)