'MTSU On the Record' guest off..

MTSU alumni Billy Pittard, chair of the Department of Media Arts, and Mike Forbes, assistant director of technical systems, use their years of media and entertainment experience to equip students with relevant and in-demand industry skills.

The Media Technology course taught by Forbes trains students on LED video display technology, a developing and booming area of the industry, Pittard said. Not only does Forbes teach students how to use the technology, he has them use it with real clients out in the field from the initial design stage to on-set operation.

“As far as we know, we’re the only university in the world doing this,” Pittard said. “MTSU has become an important player in workforce development for the touring industry.”

MTSU is in a unique position to offer this level of training, Forbes explained. It is not just that the school has access to the specialized equipment; it has the space to host large events, which provides students with the opportunities for hands-on experience.

“One thing we found,” Forbes said, “is every university is lacking in one area that we excel at. For example, a university may have a great multi-camera program, but it lacks in the technical side of LED technology. Or, they (other universities) may have great pieces of technology, but they may lack in the space needed to make shows happen.” 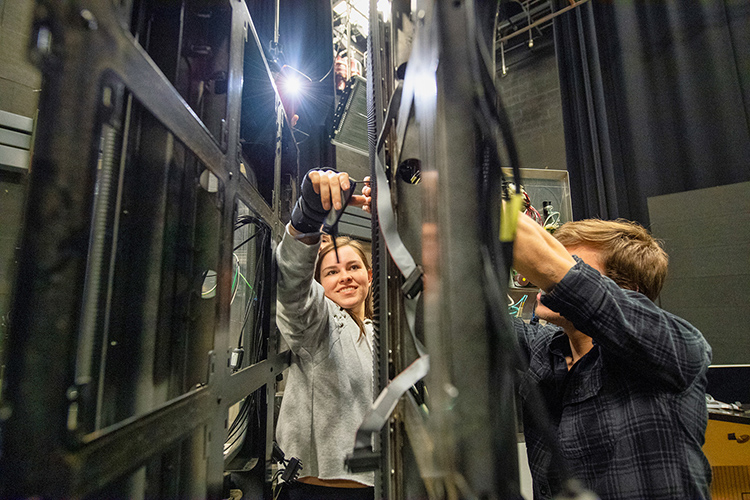 The technology is a lot more prevalent than people may realize, Pittard said.

“It’s a giant video screen,” he expanded, and it is used to visually enhance everything from live performances like Super Bowl halftimes to reality TV programs to Broadway plays to the faraway galaxies depicted in sci-fi programs like “ The Mandalorian.”

Below is a clip from a show students worked on for Experience Community Church in Murfreesboro.

The idea for the course developed around 2012, Pittard said.

PRG Gear, formerly VER, is an equipment-rental business with a large office in Nashville. Forbes and other MTSU faculty worked with the company during their careers in the industry.

Once Forbes arrived at MTSU, he pitched the idea of training students on industry equipment such as LED video display technology. 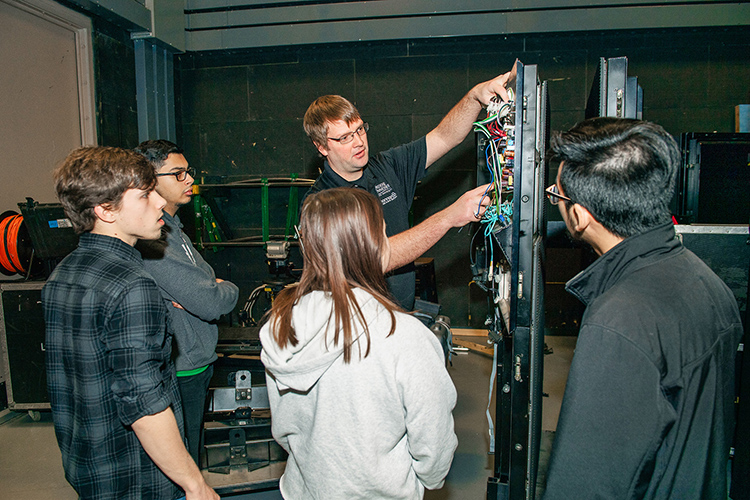 “They (PRG Gear) loaned us some product,” Pittard explained. “They gave it to us (and said) ‘You all can use it and teach the students how to use it, and then we’ll hire them or the people who rent from us will hire them.’”

“Partners such as PRG Gear in Nashville have generously donated the equipment we have so that we can train students on how the technology works,” Forbes said. 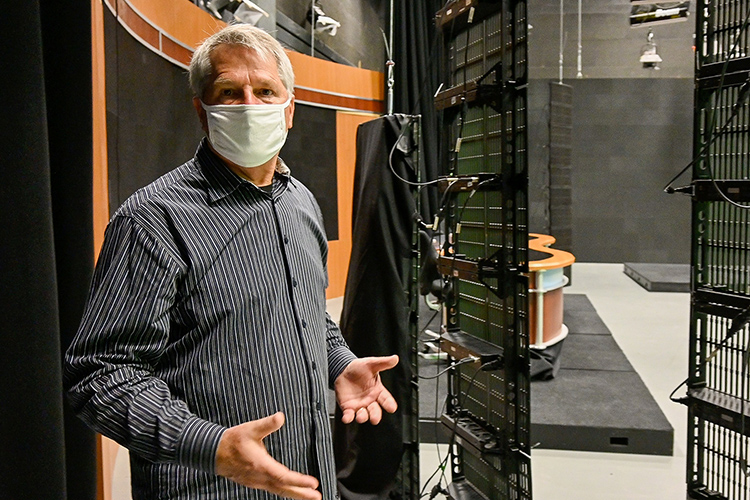 Pittard garnered career success as an industry trailblazer in graphic design and brand development. He and the College of Media and Entertainment now aim to furnish students with the same opportunity to become industry pioneers by exposing them to today’s up-and-coming career paths and aligning their skills with market demand, Pittard said.

“We want to make the students aware and constantly get them thinking … ‘Look for new areas. Look for areas that are growing. Where’s stuff happening?’” he said. “‘What does the market want? What are the opportunities?’

“I’m trying to meet the needs and opportunities that are out there (in Nashville),” Pittard continued. “The marketplace is asking us to help them develop their workforce in this area.… They are hiring.” 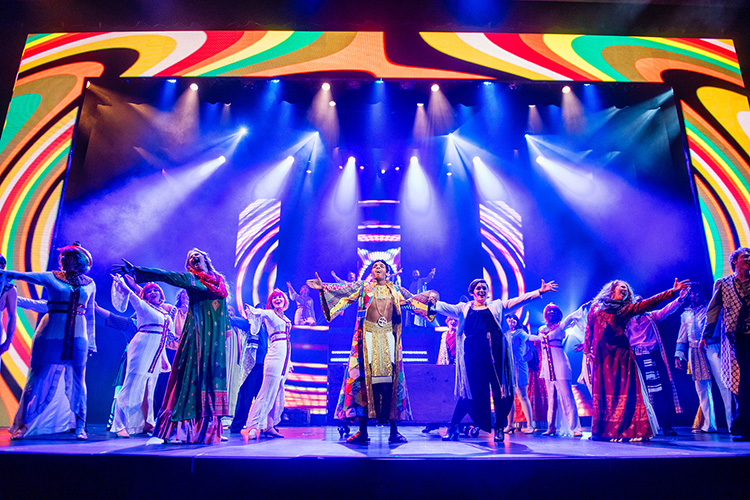 Since the course began, the department and students have flourished.

“We have some of the best technical equipment you can use,” Forbes said. “We are teaching our students the technology that is being used in the industry.

“These companies are … hiring our students directly out of our program to go work for them in the industry,” Forbes expanded. “We have had alumni work for major artists such as Rascal Flatts, Little Big Town, twenty one pilots, Keith Urban and many more.”

‘It doesn’t get better than that’

Brea Robbins, a video and film production major graduating in May, praised the expertise of Forbes and his Media Technology course.

“He is such an asset to this program,” said Robbins, a Chattanooga native. “His course dives into the technical side of production that often doesn’t get covered in other courses. We learn how to rig, cable, map and design content for LED displays, but we also learn about lenses, sensors, codecs, networking, processing, shading and so much more.”

Robbins also highlighted the practical experience that MTSU provides. Students in the course participate in four events a semester.

“On the production crew, we got to meet and work alongside some of the best in the business,” she said. “It’s one thing to have an MTSU grad who has done very well come speak to the class, which is always awesome, but it’s an even more amazing experience when you are actually getting to work alongside them, ask questions, and learn from them out in the field.

“I have gotten to work on countless ESPN broadcasts, several award shows, concerts, studio shows and live newscasts. What better way to learn than to actually go out and do it? It doesn’t get better than that.”

“Students will be at the forefront of working with major artists that come to campus,” Forbes said. “Our past artist interactions include Ludacris, Icona Pop and Young the Giant.” 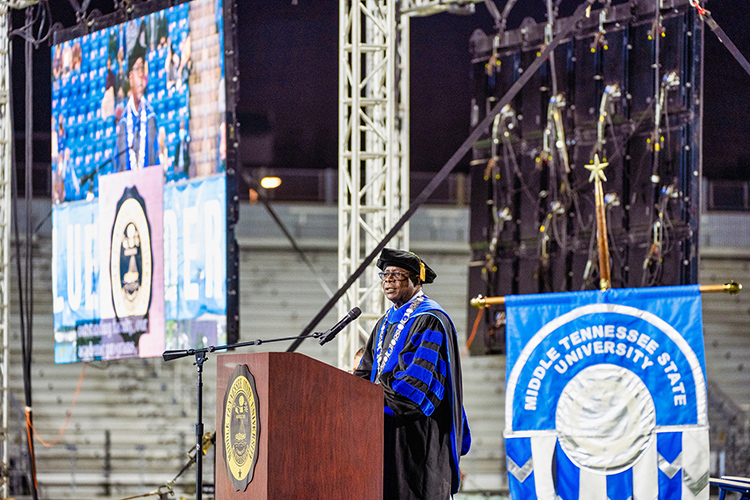 Forbes revealed that demand for the course is so high, they have expanded the class into two course offerings. Both will launch in fall 2021.

“We are giving them (students) the tools to make creative decisions, and we are guiding them along the way,” Forbes said. “It’s one of the reasons I love working here — seeing students that come from a small town and have never traveled outside of the state of Tennessee get to go experience traveling across the world with the artist, band and management.”

For students like Robbins, MTSU was a logical choice.

“I knew with all my heart that this (career path) was something I wanted to pursue, so I searched for the best program possible,” Robbins said. “MTSU was the perfect fit because of its remarkable reputation in the media industry .… There are other schools that offer this major, but none with such an established reputation in the Nashville market, which is where I would like to build my career.”

To learn more about the opportunities at MTSU’s Department of Media Arts, check out the department’s website and Facebook page.