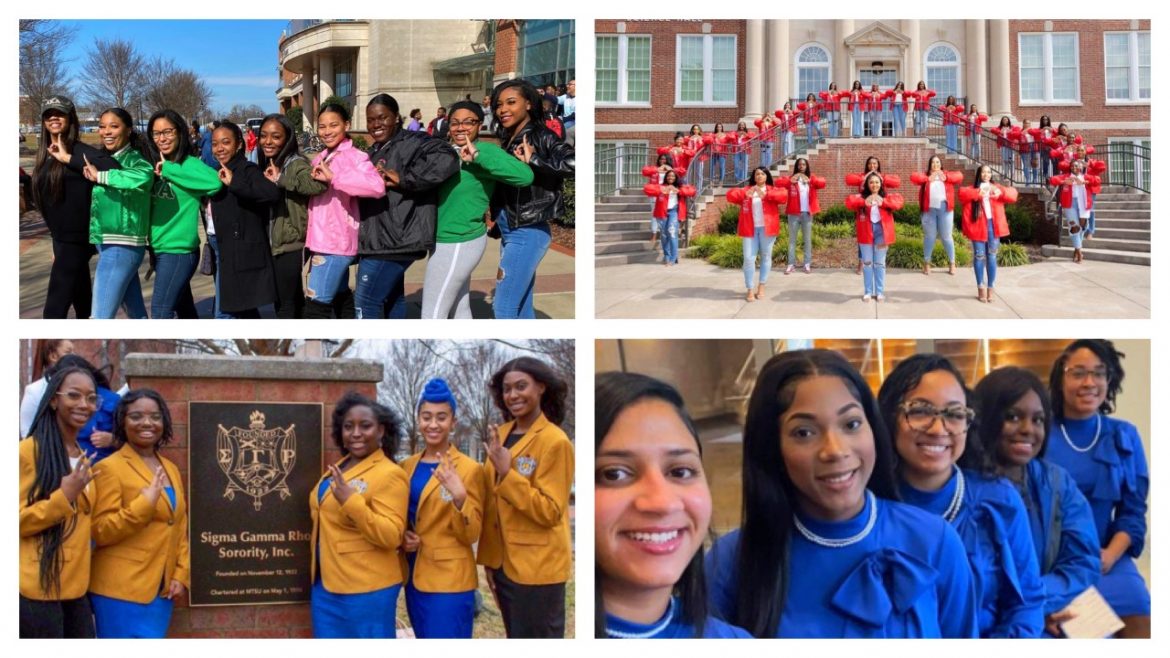 People have a lot of assumptions about Greek life, but few know about the history of education and philanthropy associated with these organizations. There are thousands of Greek organizations in existence just in the United States, but some spotlight should really be shed on the National Pan-Hellenic Council, which was founded in at the beginning of the 20th century by students at Historically Black Colleges and Universities (HBCUs). These groups were created with the intention of building a better world around them for themselves and others. The University recently recognized this work, dedicating 10 special bronze plaques on the Student Union Commons for each of the “Divine 9” fraternities and sororities as well a plaque commemorating the NPHC’s 50-year relationship with the institution. With such an awesome legacy, we’d like to highlight the four NPHC sororities on campus whose missions are to uplift their communities and help cultivate a more equitable society for everyone.

The National Pan-Hellenic Council, also known as The Divine Nine, is comprised of nine historically African American sororities and fraternities. NPHC currently has seven active chapters at Middle Tennessee State University, and they are proud to say they have all four of the National Pan-Hellenic sororities as a part of their campus: Alpha Kappa Alpha, Delta Sigma Theta, Sigma Gamma Rho, and Zeta Phi Beta, all of whom were recently presented with plaques representing their organizations in the Student Union Commons. According to Leslie Merritt, the Director of Fraternity and Sorority Life at MTSU, these sororities, all well as serving people on MTSU’s campus, have spent countless hours serving the Murfreesboro community with a “specific, but not limited, focus on the black community.”

“The voice of NPHC women has mattered throughout decades as students discuss current topics related to women’s rights and civil rights. Some of their service opportunities include food, school supply and clothing drives, highway cleanups, reading to children in schools, and voter’s registration drives, just to name a few,” Merritt says about the nature of the NPHC sororities’ philanthropy.

Founded nationally in January, 1908 at Howard University, MTSU’s Eta Psi chapter of Alpha Kappa Alpha has been a part of campus since October, 1973. They are the first Greek-letter organization established by American women of color and they boast a membership of over 200,000 college-trained women around the world. Their symbol is the Ivy Leaf, their flower is the pink tea rose, and their colors are salmon pink and apple green. The women of Eta Psi serve the American Red Cross and focus their efforts on economic and entrepreneurial growth, educational advancement through technology and health management, and the strengthening of the African American Family. A couple of their more prominent alumni are Kamala Harris, the first African American woman to be elected to the U.S. Vice Presidency, and Alicia Keys, a 15-time Grammy award-winning performer and accomplished actress. 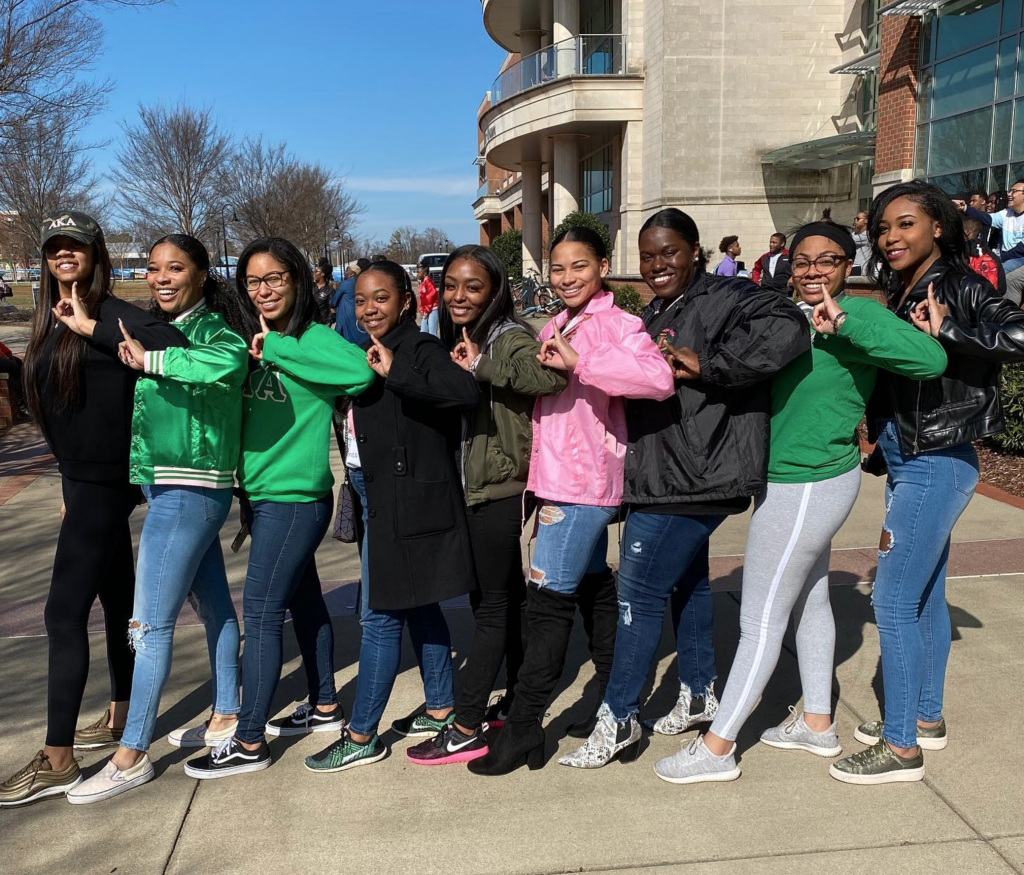 Delta Sigma Theta was founded in January of 1913 at Howard University and the Iota Tau chapter was founded at MTSU nearly exactly 60 years later in January of 1973. Currently, they are the only NPHC sorority to attain the True Blue Accreditation Status of Exceeds Expectations and have the highest cumulative GPA in the NPHC sororities for the Fall of 2021. Their symbols are the elephant and fortitude, their flower is the African violet, and their colors are crimson and cream. Race for the Cure and Habitat for Humanity are the philanthropies that the Iota Tau membership serve and they focus on the implementation of programs that address education and health inequalities, financial literacy, and international awareness  and involvement of social injustices. Some of their most well-known alumni are Renée Elise Goldsberry, who played Angelica in the Original Broadway Cast of Hamilton the Musical, and Shirley Chisholm, the first African American woman to be elected into the United States Congress. 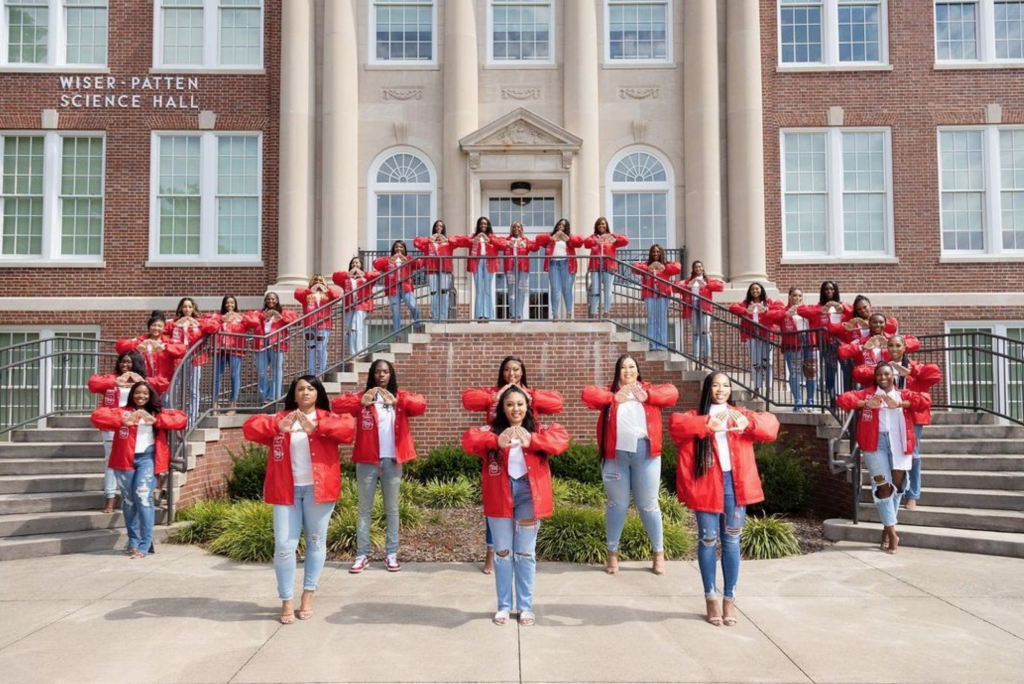 Sigma Gamma Rho was the latest sorority to be founded in the Divine Nine in November of 1922 at Butler University, and their Lambda Chi chapter here at MTSU was the last of the sororities to be added to campus in March of 1990. They have over 85,000 women in more than 500 chapters all over the world. Their symbol is the French poodle, their flower is the yellow tea rose, and their colors are royal blue and gold. Lambda Chi operates under their organization’s motto, “Greater Service, Greater Progress,” and partner with philanthropic national organizations such as Project Reassurance, St. Jude Children’s Hospital, March of Dimes, and others in order to improve the quality of life for their community on and off campus. Their prominent alumni members include MC Lyte, a pioneer in the Hip Hop genre and the first female solo rapper to release a full album, and Hattie McDaniel, the first African American to win an Academy Award for her role in Gone With The Wind. 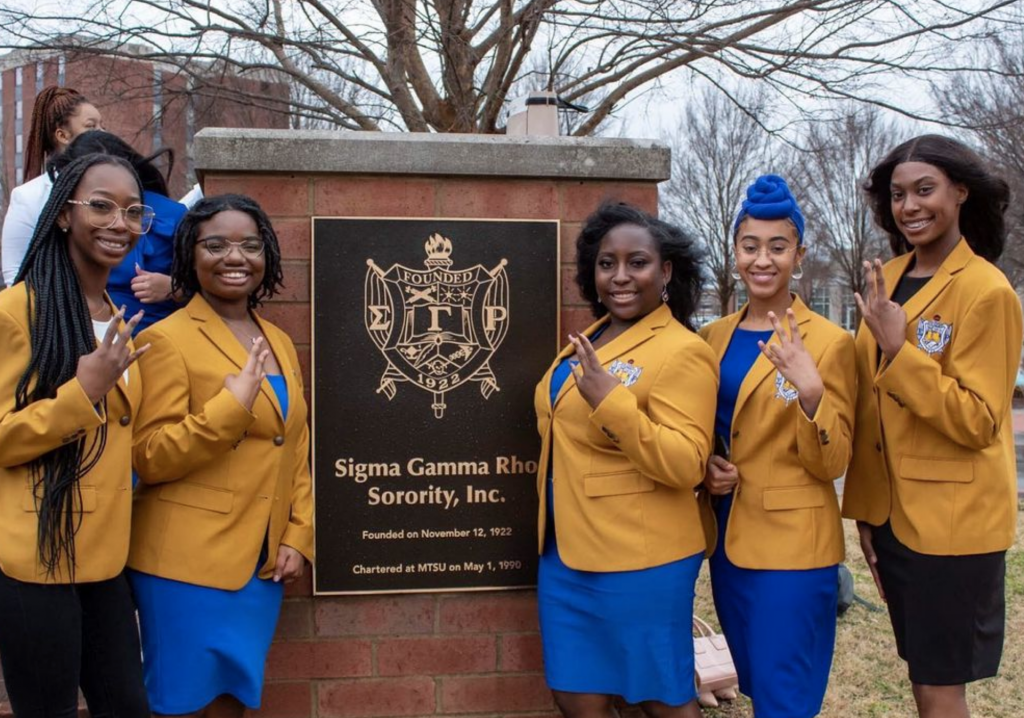 The final NPHC sorority is Zeta Phi Beta, created by five young women with the vision of a sorority not overshadowed by elitism and socialization. They were founded nationally in January of 1920 at Howard University and whose Mu Theta chapter was chartered at MTSU in September of 1977. It was the first NPHC organization to have a national headquarters and have an active membership around the globe of more than 100,000 people. Their symbol is the dove, their flower is the white rose, and their colors are royal blue and white. Mu Theta’s most prominent international program is Zeta Helping Other People Excel or Z-HOPE which serves to empower individuals to develop healthy lifestyle choices, but they also work philanthropically with Relay for Life, Toys for Tots, and others to empower men, women, and children in the Murfreesboro community. Alumni of theirs that are well-known to the public are Dionne Warwick, a six-time Grammy award-winning singer, actress, and one of the most charted female vocalists of all time, and Zora Neale Hurston, who is cited to be one of the greatest writers of 20th century African American literature. 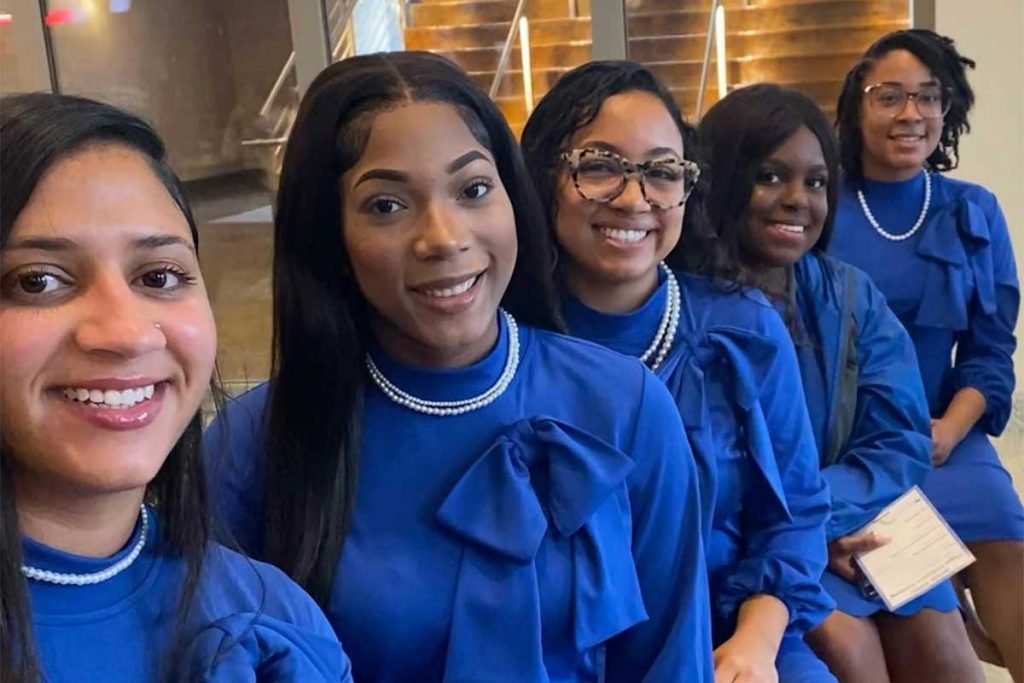 According to Merritt, NPHC chapters’ process of recruitment differs from the National Pan-Hellenic Conference’s once-a-year way of doing things. They each hold a week of events throughout the school year and host a process called Intake that’s individualized for each sorority and is composed of the careful selection with impressive GPAs, an established history of philanthropic service and leadership, and recommendation letters from sorority alumni. This process can happen whenever and however many times a year the chapter chooses. At the end of their process their new members, who are referred to as Neophytes, are presented to MTSU’s campus and community to become a part of a proud legacy of women committed to change, empowerment, and justice for their communities.

Merritt encourages any young women driven to contribute to the multicultural life on MTSU to consider joining on of these amazing chapters saying, “If you are interested in joining an NPHC sorority, please complete the NPHC Interest form located at www.mtsu.edu/fsl. You are also welcome to email leslie.merritt@mtsu.edu.”

Author Kylie Wellington is a junior at MTSU majoring in Public Relations and minoring in Theatre and Mass Communication. The views and opinions expressed above are her own.