In Memphis for business as regional director for AdvancED/Cognia, Smith was invited by MTSU President Sidney A. McPhee to the student reception at Esplande Memphis as the university recruits prospective high school and transfer students for 2020 and beyond. During the program, he asked her to speak.

“I have watched Sidney McPhee for 15 years,” she said. “I put my money on his vision.” 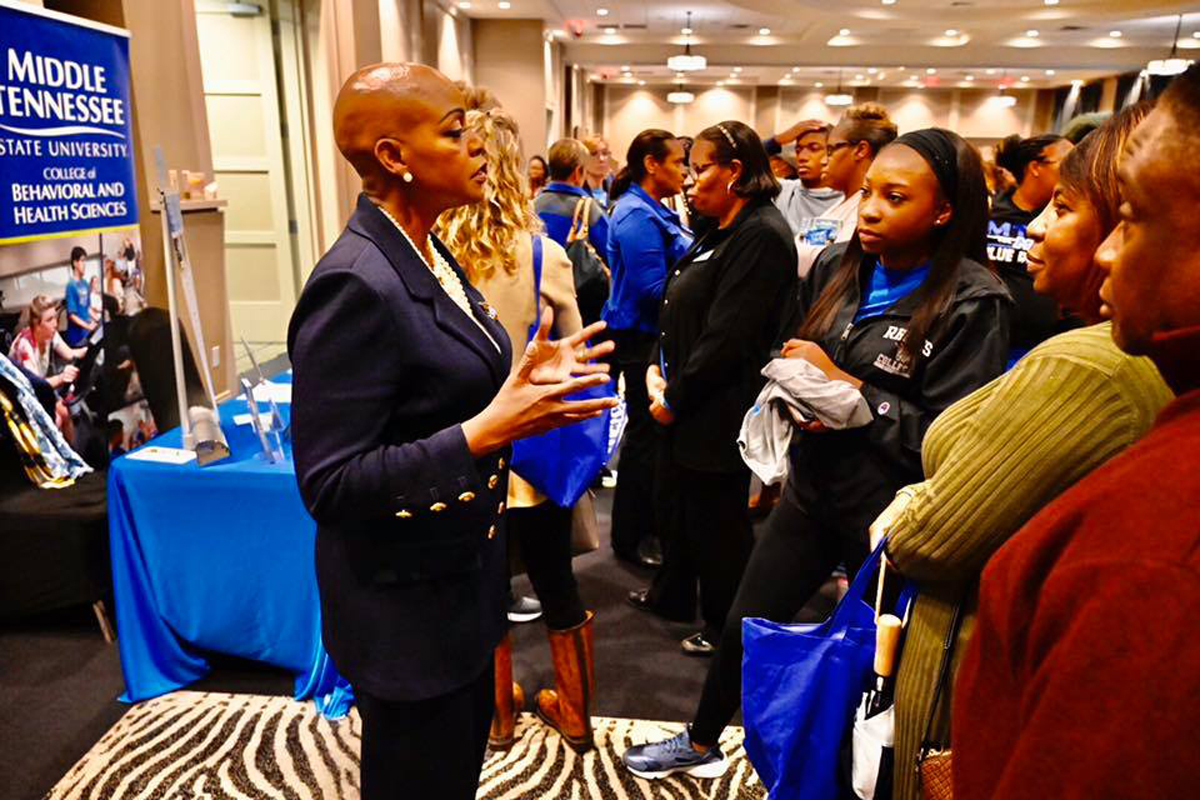 Szczepanski raised her hand. She didn’t know what Smith was about to do. “I’m going to give you a $4,000 scholarship,” said Smith, who wasn’t sure of an amount until saying it. Later, Smith said “this is a God thing that I’m here. I hadn’t planned to come, but Dr. McPhee invited me.”

Szczepanski is part of triplets. Her step-mother, Kelly Szczepanski, is a special ed teacher. An aunt also teaches special ed. And Katie Szczepanski, who attends Southwest Tennessee’s Macon Cove campus, has wanted to pursue this field since being a ninth-grader.

“This means a lot to me,” she said about the unexpected award. “I’ve always wanted to do special education. “This will help my dreams come true.” She attended the tour event with her mother, Laura Morris.

Lana Seivers, dean of the MTSU College of Education, said there is “such a short supply nationwide and certainly in Tennessee” for special education teachers.

“Tennessee has determined it’s one of the high-demand areas, particularly in the STEM (science, technology, engineering and math) areas of math and science,” Seivers said, adding that “it’s in her (Szczepanski) DNA. I’m so excited Dr. Smith was willing to award these funds and put her closer to coming here. She will be with us in fall 2021.”

At both Memphis, Jackson and all 14 tour events, McPhee and Linda Olsen, director of undergraduate recruitment, drove home the Dec. 1 guaranteed scholarship deadline because it falls on the Thanksgiving holiday weekend.

Memphis and Jackson were the final two stops on the 14-city tour for 2019. To view photos, visit https://www.facebook.com/mtsublueraiders. 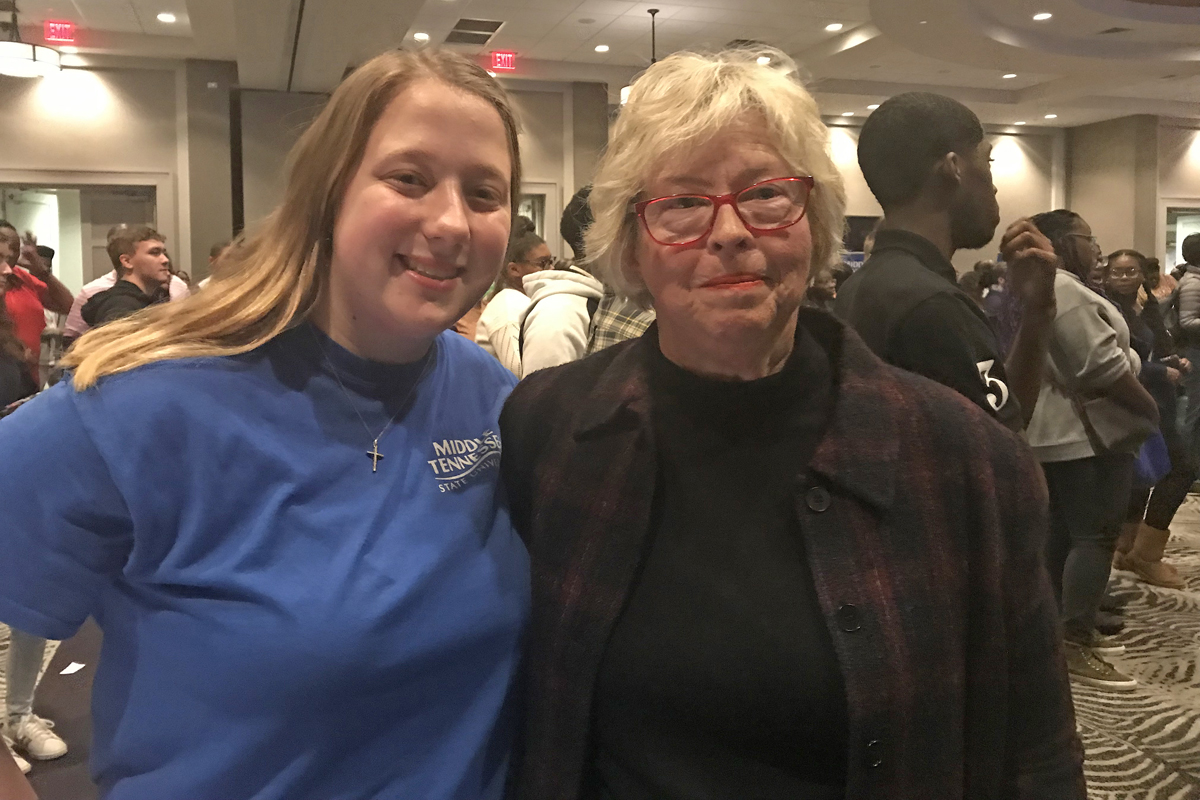 • McPhee called out the name “Kendall Morgan,” which made the shy Germantown High School senior emotional, as she was receiving a $10,000 scholarship. “I’m still in shock,” she said before leaving. “It means a lot. I didn’t think it was real.” Her mother, Sanitra Morgan, said, “It’s a blessing.” Marcus Bramlett, Kendall’s father and Sanitra’s husband, died in 2013. Classmate Trinade Patrick, 17, later congratulated her good friend as they discussed being MTSU roommates next fall.

• Edith Clark Moore (Class of 1968 in journalism) committed a $1,000 scholarship and mentoring opportunity that went to junior Courtney Shivers, 16, who wants to be a neurologist.

• Memphis Overton High School AdviseTN college adviser Patricia Henderson, who has been in education 26 years, “continues to push MTSU so hard.” Her efforts sent 24 students to MTSU in 2018-19 and already has 20 students committed for this year (15 planned to attend the event in Cordova). “I’m a ‘True Blue’ believer is the best way to put it.” McPhee gave her a $3,000 scholarship, which she planned to divide three ways. MTSU admissions counselor Megan Berry is a former student.

• Lynda Williams, MTSU criminal justice professor in the College of Behavioral and Health Sciences and a retired U.S. Secret Service agent (former national recruiter), made quite an impression on the large Memphis audience. She replied “eight” when McPhee asked her how many presidents she had protected. “Now she’s protecting the MTSU campus,” he added. 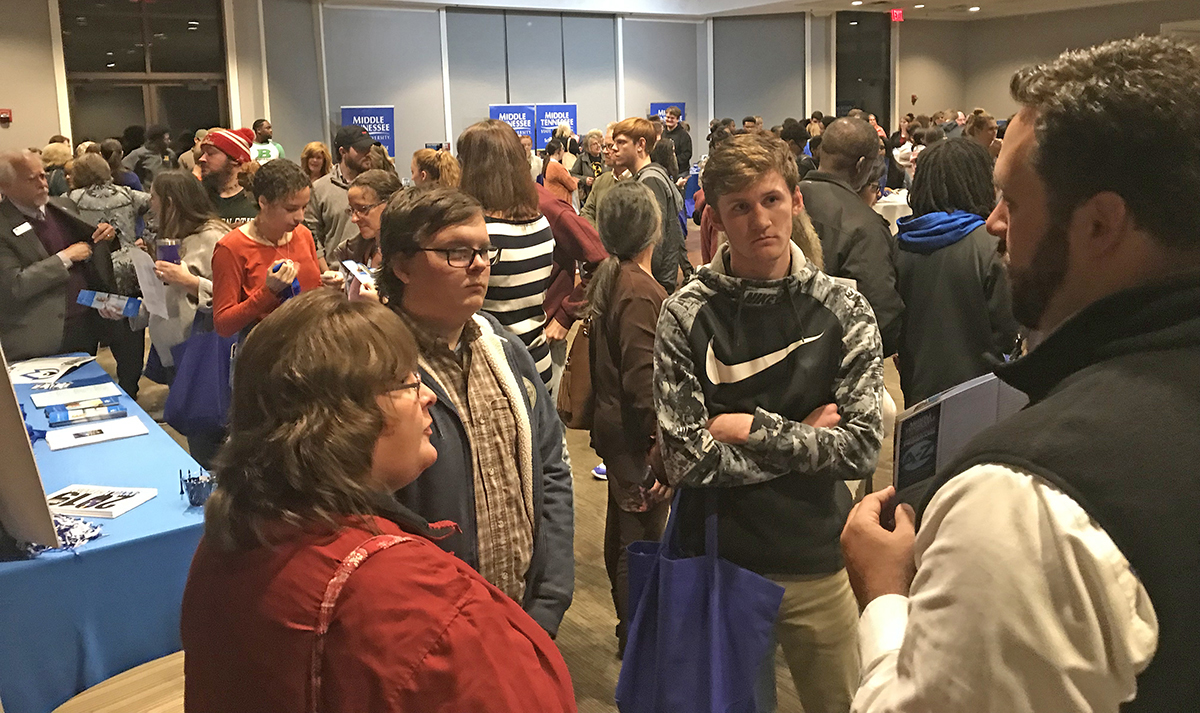 • Briley Spencer, 17, a North Side High School senior, said things became “pretty exciting” after McPhee announced she was one of three $6,000 scholarship recipients in the event at the Jackson Country Club. “I didn’t think I was going to get it. This will help me a lot and take the financial stress off my parents (Gwendolyn Spencer and Patrick Gause) and less for them to worry about,” added Briley Spencer, who plans to study athletic training or physical therapy. Dyersburg State sophomore Shelby West, who has an interest in animal science, and Miller Boyd, 18, of Jackson, a Sacred Heart senior interested in film production, were the other major scholarship recipients.

• Austin Vest, 17, a junior at Chester County High School in Henderson, Tennessee, wants to pursue science and follow sister Aubrey Vest, 18, to MTSU, where she is a sophomore aerospace major. At McPhee’s invitation, their mom, Julie Vest, shared about the family’s success story with MTSU.

On deck for MTSU Admissions

MTSU holds daily campus and some special Saturday tours. The next True Blue Previews will be Saturday, Feb. 22, and Saturday, March 21. The Honors College Presidents’ Day Open House will be Monday, Feb. 17. To register for events, visit www.mtsu.edu/rsvp. 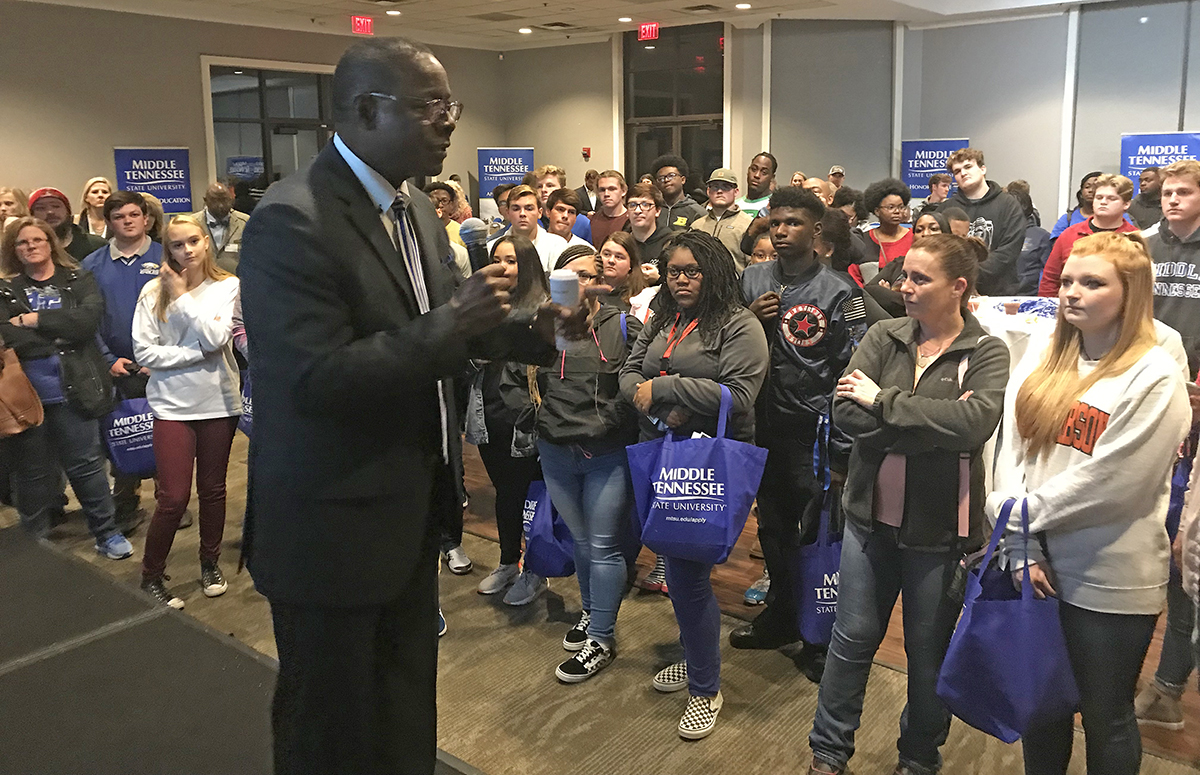 MTSU President Sidney A. McPhee talked to the Jackson, Tenn., crowd attending the annual True Blue Tour event at the Jackson Country Club Thursday, Nov. 7, about opportunities — scholarships, programs and other offerings — should they decide to attend the Murfreesboro university. (MTSU photo by Randy Weiler)