Middle Tennessee State University and the Middle Tennessee Council of the Boy Scouts of America renewed their partnership that will allow the university to remain a resource for Scouting programs through 2025.

The renewal, announced Thursday, Feb. 24, by the university, was praised as a win-win by officials from both organizations. It allows prospective students from the council, which serves 37 Middle Tennessee counties and Fort Campbell, Kentucky, to attend events on campus and seek faculty mentors for activities and merit badges. 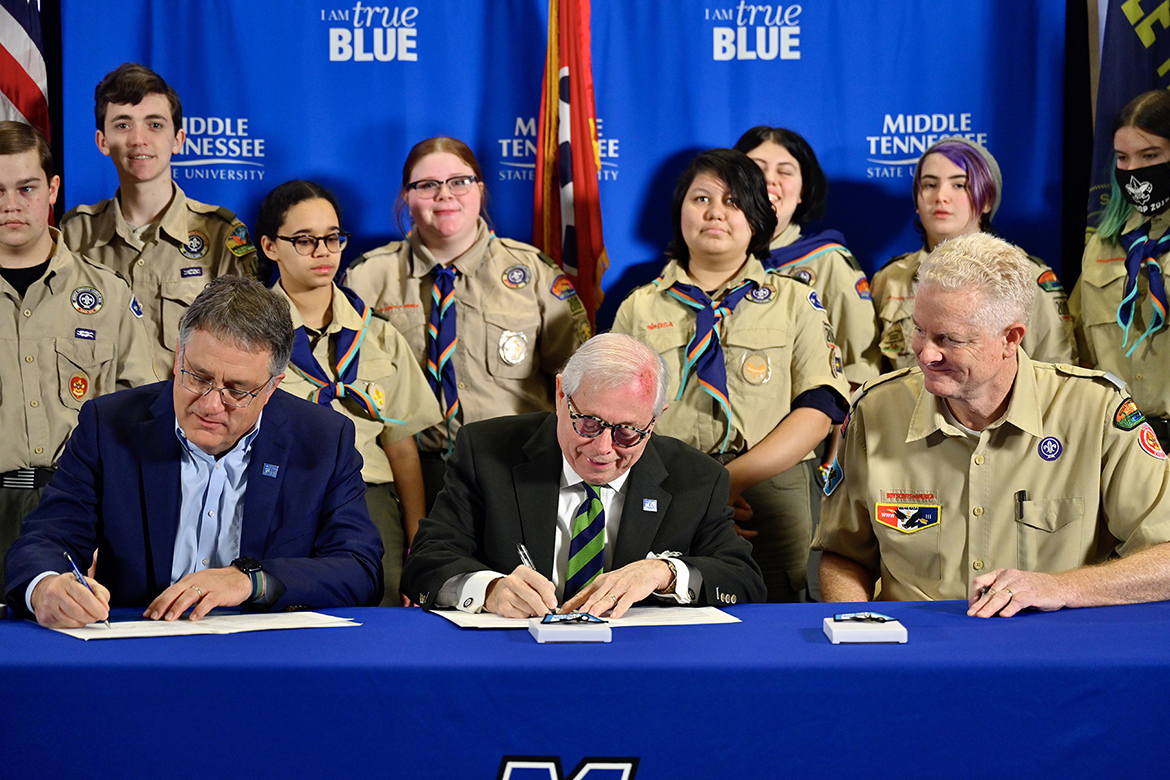 Retired Army Lt. Gen. Keith Huber, MTSU’s senior advisor for veterans and leadership initiatives and an Eagle Scout, welcomed the signatories to the brief signing ceremony and served as emcee.

About 20,000 youths and their families participate in programs conducted by the Nashville-based council, which is consistently among the nation’s fastest-growing councils.

“During the first four years of this partnership, we have welcomed hundreds of Scouts to our campus,” Byrnes said, adding that the partnership “allows these good works to continue – and expand into the future.” 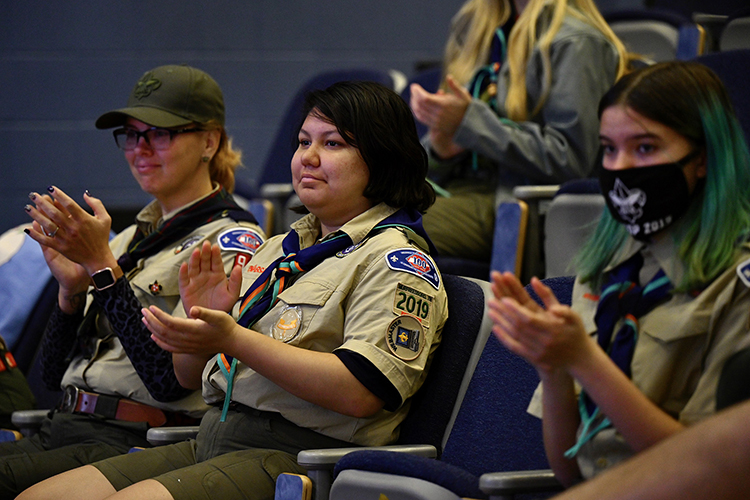 Scouts and leaders from the Middle Tennessee Council of the Boy Scouts of America applaud during a signing ceremony Saturday, Feb. 19, at Middle Tennessee State University that renews a partnership between the Boy Scouts and MTSU. The signing was held as part of the 32nd annual MTSU Merit Badge University led by MTSU faculty and staff. (MTSU photo by Cat Curtis Murphy)

Baker, a Nashville resident and owner and CEO of Sprint Logistics LLC, is also an Eagle Scout and now serves as a member of the council’s executive board.

“The missions of MTSU and the council, two very successful organizations, are very similar,” Baker said. “Both organizations work to develop young people into productive citizens with a strong sense of service and purpose in life.”

Brown noted in 2018, during the signing of the first agreement, that “hundreds of thousands of Scouts in the Middle Tennessee Council have benefited from a strong partnership with MTSU,” dating for decades before the formal relationship.

He thanked MTSU for assisting with several recent key council events, including this year’s banquet for its Order of the Arrow honor society, the council’s University of Scouting premier adult training event and, three years ago, helping found Troop 2019, one of the nation’s first all-girl units in Scouts BSA. 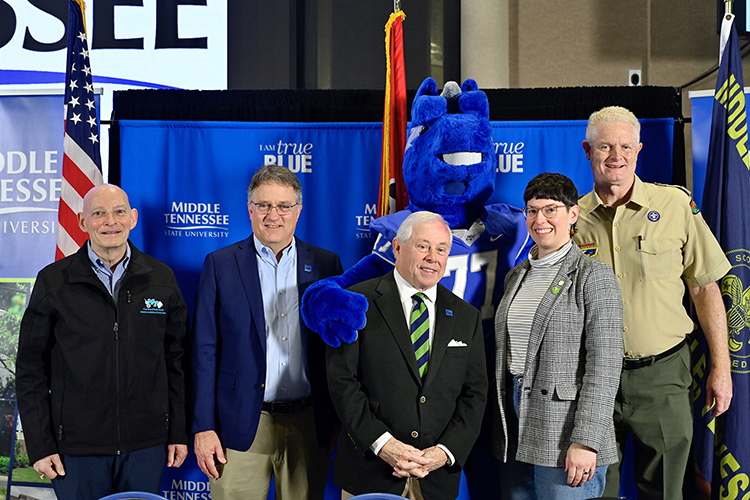 Pictured, from left, retired Lt. Gen. Keith Huber, senior adviser for veterans and leadership initiatives; MTSU Provost Mark Byrnes; former Middle Tennessee Council of the Boy Scouts of America President J.B. Baker, a member of the university’s Board of Trustees; Natalie Hoskins, an assistant professor of communication studies in the College of Liberal Arts and a founding adult leader of Troop 2019, and Council Scout Executive and CEO Larry Brown. Behind them is MTSU mascot Lightning. MTSU and Scout officials renewed their partnership at the 32nd annual MTSU Merit Badge University Saturday, Feb. 19, at MTSU. (MTSU photo by Cat Curtis Murphy)

Natalie Hoskins, an assistant professor of communication studies in the College of Liberal Arts and a founding adult leader of Troop 2019, was cited by Byrnes as an example of the faculty engagement that has come about through the partnership.

Reflecting on her work with Troop 2019, Hoskins said, “I have watched these girls grow into young women, several of whom have chosen to make our campus their home for their college experience by enrolling as students at MTSU.

“This is what we should aim for when we work with BSA youth — faculty, staff, or any member of the MTSU community — in honor of this partnership, so they can continue to learn and explore with us.”

MTSU’s partnership with the Scouts was modeled after a similar agreement crafted in 2014 with the cadet program of Civil Air Patrol, the volunteer civilian auxiliary of the U.S. Air Force, which was renewed for a third time last year through 2024.