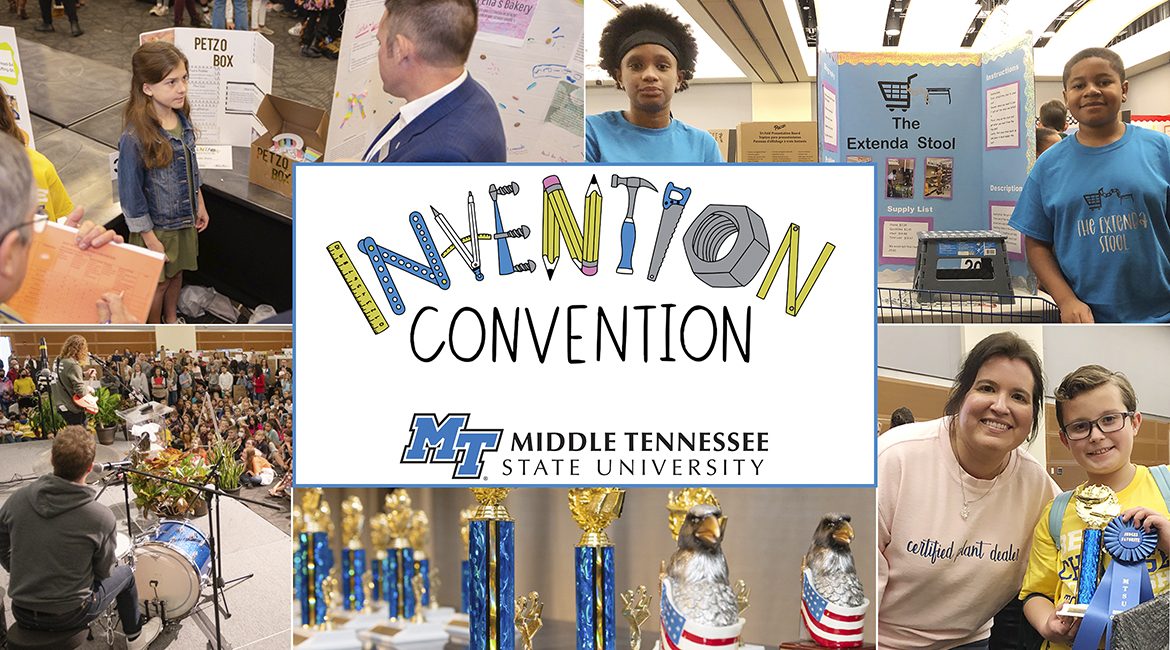 They spent months brainstorming and building and breaking and fixing and testing and getting their creations almost perfect.

That’s why it was no surprise to see some young inventors abruptly make a couple of high-speed circuits around the Student Union Ballroom at Middle Tennessee State University‘s 29th annual Invention Convention, nimbly dodging teachers, judges, parents, siblings and fellow fourth-, fifth- and sixth-graders and boomeranging back to their assigned spots and their 340 devices, gadgets and games.

These 700-plus young innovators from 36 schools across the Midstate had to burn off some of that creative energy somewhere.

They’ve spent more than 18 months cooped up at home, attending virtual school, then finally real school again, inventing something for the Feb. 17 event.

The pandemic canceled the 2021 Invention Convention, which would have been MTSU’s 29th regional event. Some participants used the extra time to refine their 2021 inventions, while others started over with new ideas, approaches and presentations.

Each year, the students use a maximum of $25 to create and present an invention from one of two categories, “Games” or “Make Life Easier.” For the second time, a new category, “Entrepreneurship,” gave the young pioneers a chance to showcase how they’d market their inventions.

Ultimately, their efforts led this year to a better tire lock, a more efficient vitamin reminder, an effective cord controller, safer ornament storage, pet care helper and other life-easing solutions to near-universal problems. Their unique new games aimed to make learning about decimals, history, spelling and other subjects even more memorable and useful.

And their grasp of how to get their ideas to the public led to plans for biomes, cafes and gift businesses. 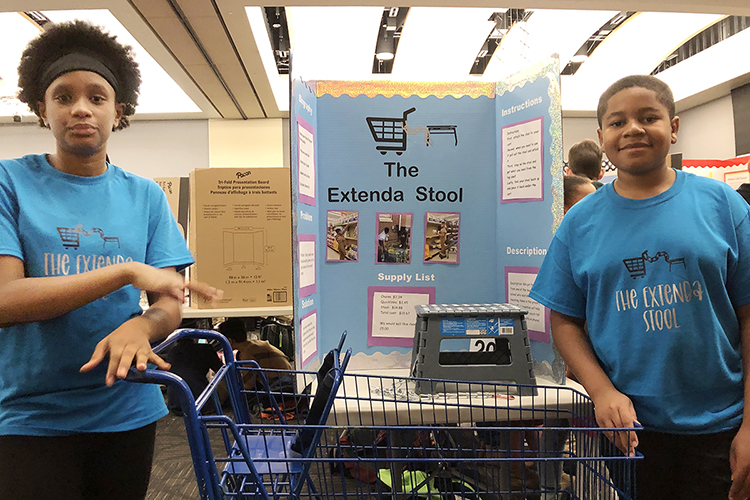 Makiya Lankford, left, and Richard Finley, both fifth graders at East Side Elementary School in Shelbyville, Tenn., pose in their customized T-shirts with “The Extenda Stool,” their invention to help shoppers more safely reach grocery items, in MTSU’s Student Union Ballroom Thursday, Feb. 17, at the 29th annual Invention Convention. The pair were among 700-plus fourth-, fifth- and sixth-grade students from 36 schools across the Midstate who showcased their inventions to make life easier, their newly invented games and their entrepreneurship plans for their projects. (MTSU photo by Gina E. Fann)

Richard Finley and Makiya Lankford, for example, developed “The Extenda Stool,” which attaches to a grocery shopping cart with a lightweight chain, to help shoppers more safely reach items on upper shelves.

The students from Shelbyville’s East Side Elementary School spent less than $25 on their invention for the fifth grade “Make Life Easier” category, which Lankford said was inspired by a teacher’s experience.

“We thought people could get the amount they needed without falling or dropping anything,” Finley explained. “We found a way to prevent that from happening.”

‘The heroes … are the teachers’

MTSU Department of Elementary and Special Education professor Tracey Huddleston established the Murfreesboro Invention Convention in 1993 in tribute to her mother, True Radcliff, a longtime fifth-grade teacher who conducted “Invention Convention”-type events at her own school.

About 100 received certificates, ribbons, trophies and praise for their 2022 creations; several of those winners are headed next to the national Invention Convention May 31-June 3 in Dearborn, Michigan. 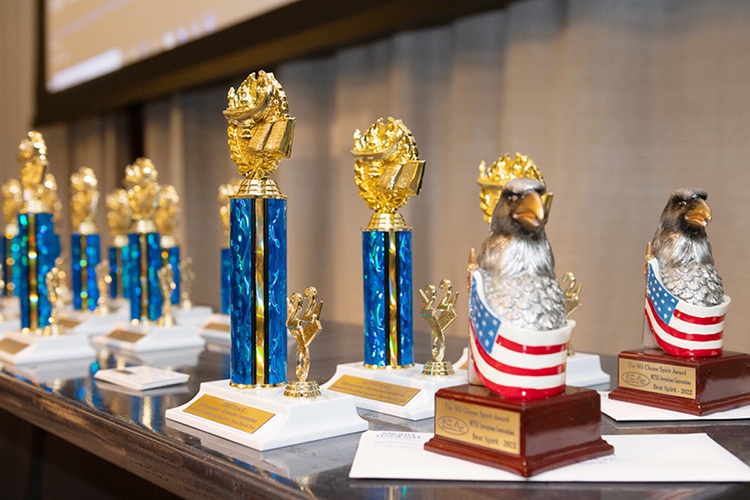 Trophies wait to be distributed to winners at MTSU’s 29th annual Invention Convention in the Student Union Ballroom Thursday, Feb. 17. The university welcomed 700-plus fourth-, fifth- and sixth-grade students from 36 schools across the Midstate with their inventions to make life easier, their newly invented games and their entrepreneurship plans for their projects. (MTSU photo by James Cessna)

• And Cooper Jones and Tucker Bouldin of Murfreesboro’s Middle Tennessee Christian School received the sixth grade Franklin Award for their “No Snooze Mat.”

A list of the 2022 MTSU Invention Convention award recipients is available here. This year’s convention program, which includes all the inventors and their innovations, can be viewed here.

“The heroes in this whole process … are the teachers,” Huddleston said. “They make this event a success — they provide the foundation needed for their students to develop and nurture their inventions.

“The teachers take the students through a design process beginning with brainstorming and identifying a problem they would like to solve, or a game to reinforce knowledge, or a new service. The process then continues with researching, modifying or redesigning, and then even brainstorming some more, before they get to that final product.

“They’re amazing; their passion for their students being successful makes them superheroes to me. They’re just the best.

“The Invention Convention would not take place at all if it were not for our two sponsors, Wilson Bank & Trust and the Clouse-Elrod Foundation,” Huddleston added. “We’re very fortunate to have these special people to encourage and support this event.”

Each Invention Convention showcases an everyday invention and explains its history, such as a tape measure, golf ball, USB charger or sunglasses. It also features at least one guest speaker, which have included astronauts, artists, athletes, musicians, scientists and historians, and in recent years, the young inventors’ peers. 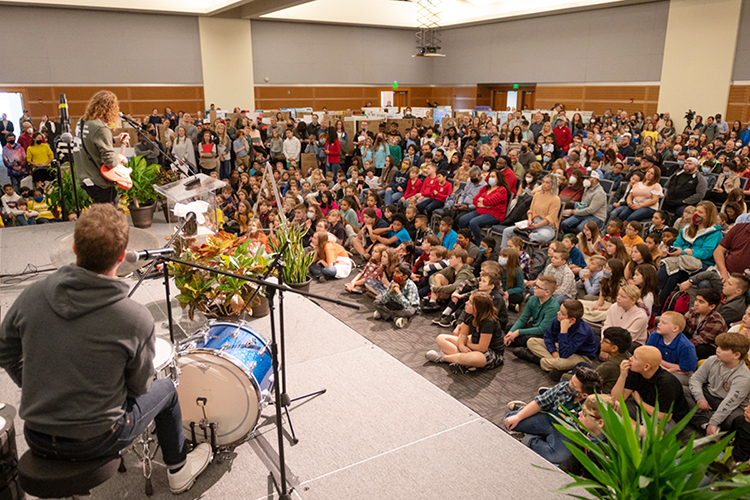 Invention Convention 2022 participants, their teachers and supporters listen carefully inside MTSU’s Student Union Ballroom Thursday, Feb. 17, as musicians Jacob Schrodt, seated in the foreground, and Toby Friesen, standing at center left, talk about the inventions that help them play their drums and guitar, respectively. The guest speakers were part of the 29th annual event that welcomed 700-plus fourth-, fifth- and sixth-grade students from 36 schools across the Midstate. (MTSU photo by James Cessna)

That came in handy for speakers Jacob Schrodt and Toby Friesen, veteran musicians who explained, and demonstrated, how their instruments — Schrodt’s drums and Friesen’s guitar — evolved and some of the inventions developed to use with them.

Hayden Thornell, a fifth grader at Murfreesboro’s Erma Siegel Elementary, knows a little of that feeling of success, too. He invented quite a succulent business idea after his parents nixed his summer 2020 plan for a lemonade stand.

“People would be buying not just one but five (gift boxes), and then we started selling on Etsy and it blew up. It’s something he was able to take ownership of from Day One.”

You can learn more about MTSU’s Invention Convention, sponsored by the College of Education, at www.facebook.com/MTSUInventionConvention. The national convention website is https://inventionconvention.org. 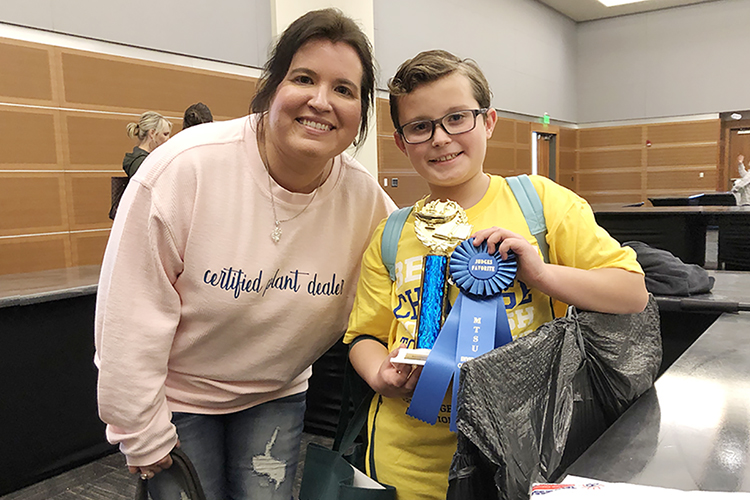 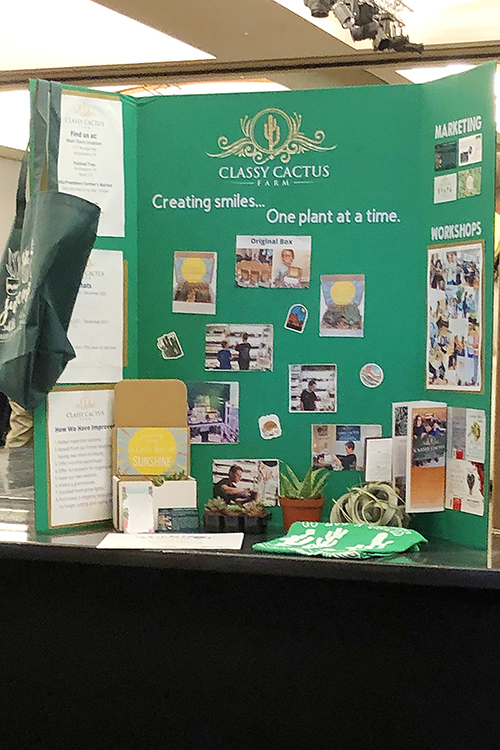 The dual award-winning marketing plan for “Classy Cactus Farms,” a business invented by Hayden Thornell, a fifth grader at Erma Siegel Elementary School in Murfreesboro, sits on a table after judging in MTSU’s Student Union Ballroom Thursday, Feb. 17, at the 29th annual Invention Convention. Thornell’s idea won the Judges’ Favorite All-Grade Entrepreneur and the All-Grade Entrepreneur awards at the event among inventions by 700-plus fourth-, fifth- and sixth-grade students from 36 schools across the Midstate. (MTSU photo by Gina E. Fann) 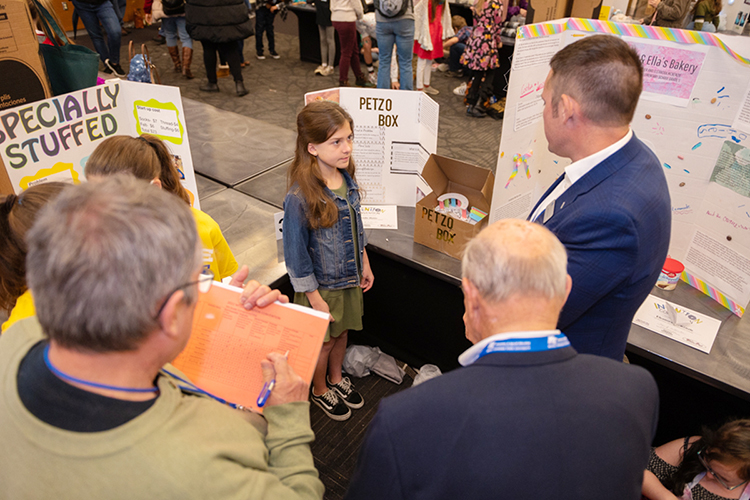 Andie Hutto, center, a fifth grader at Coles Ferry Elementary School in Lebanon, Tenn., listens carefully to a question from Josh Aaron, right, a professor in MTSU’s Department of Marketing in the Jones College of Business, about her invention to “make life easier” at the 29th annual Invention Convention in the Student Union Ballroom Thursday, Feb. 17. Aaron, the marketing department’s Pam Wright Chair of Entrepreneurship, served as one of more than 20 judges for inventions by 700-plus fourth-, fifth- and sixth-grade students from 36 schools across the Midstate to make life easier, their newly invented games and their entrepreneurship plans for their projects. (MTSU photo by James Cessna)