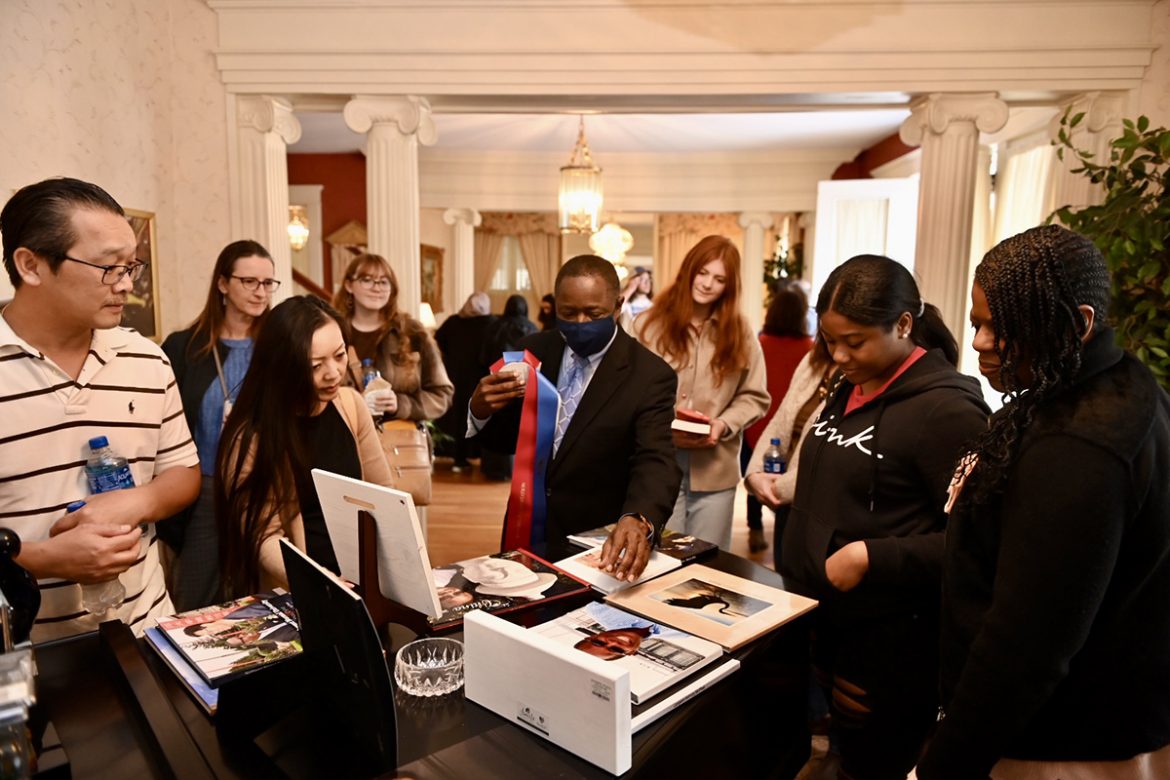 The University Honors College, Office of Admissions and Office of the President held three major events Monday, Feb. 21, for potential students and their parents. 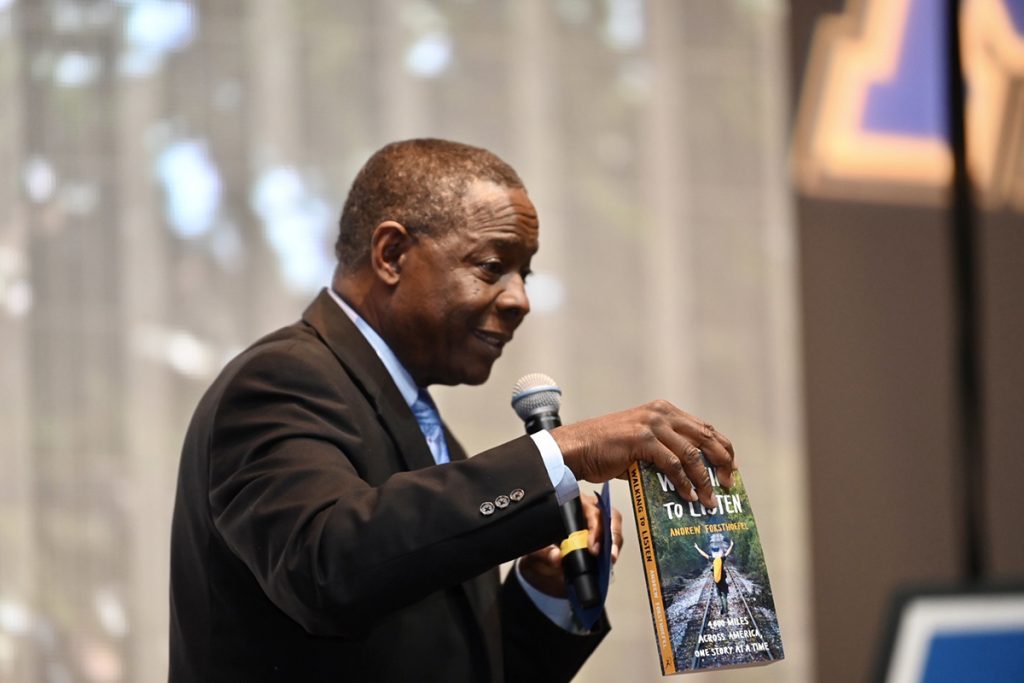 MTSU President Sidney A. McPhee holds the 2022 Summer Reading Program book, “Walking to Listen: 4,000 Miles Across America, One Story at a Time,” that new MTSU students will be required to read before the start of classes in August. He shared this during the president’s Celebration of Scholars Monday, Feb. 21, in the Student Union Ballroom. About 100 high school seniors, who have been offered major scholarships to attend MTSU, attended the event. (MTSU photo by James Cessna)

The Honors College hosted nearly 20 students who have been offered Buchanan Fellowships, the highest-awarded scholarship available to an MTSU student. Admissions held an open house for about 75 students looking to be a part of the Honors College. President Sidney A. McPhee concluded the day with a Celebration of Scholars for 100 major scholarship recipients.

Scholarship recipients must accept the offers by May 1, said Laurie Witherow, associate vice provost for Admissions and Enrollment Services.

As an added treat, McPhee asked invited guests to visit he and first lady Elizabeth McPhee at their home after the Celebration of Scholars.

In light of the lingering pandemic, masks were recommended for those attending the events. 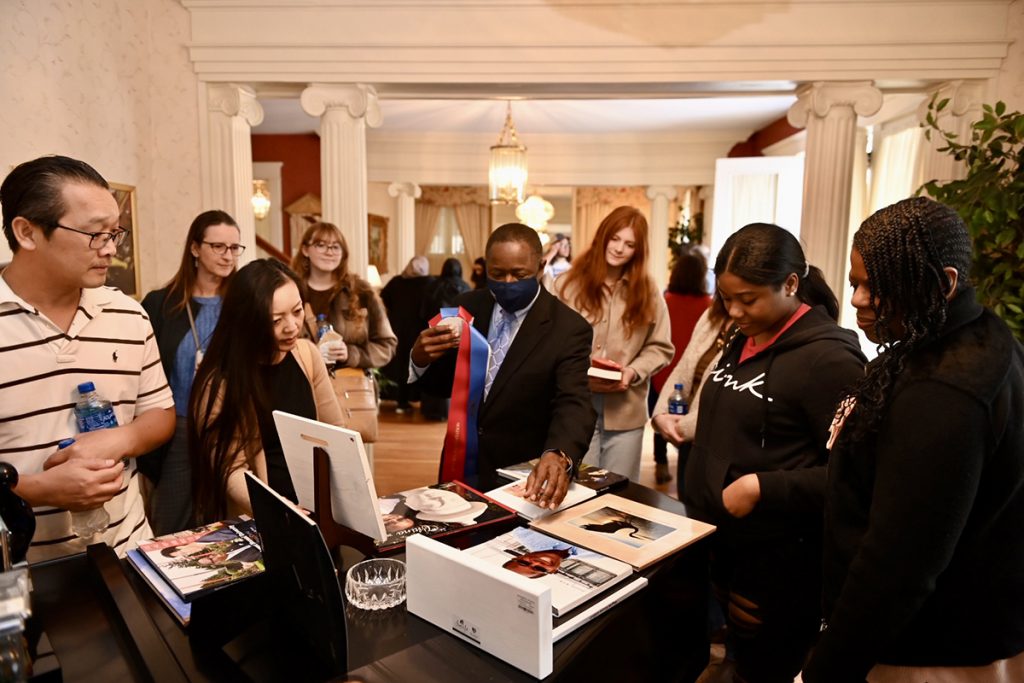 MTSU President Sidney A. McPhee, center, mingles with guests at his home, showing some of the photographs he has taken on past trips to China during the Presidents Day Open House Celebration of Scholars to conclude the visit by high school seniors who have been offered major scholarships by the university. Dozens of potential students and their parents accepted his offer to visit the house at the corner of East Main Street and Middle Tennessee Boulevard. (MTSU photo by James Cessna)

A Buchanan prospect with variety of interests

Zoe Critchlow of Clarksville, Tennessee, and others considering the Buchanan Fellowship offer, received personal attention from Dean John Vile, and his Honors staff and students in the Paul W. Martin Sr. Honors Building.

“I like that there are smaller classrooms (in Honors). It will be nice to be able to talk to your teachers and not have to grab for attention,” Zoe Critchlow said. 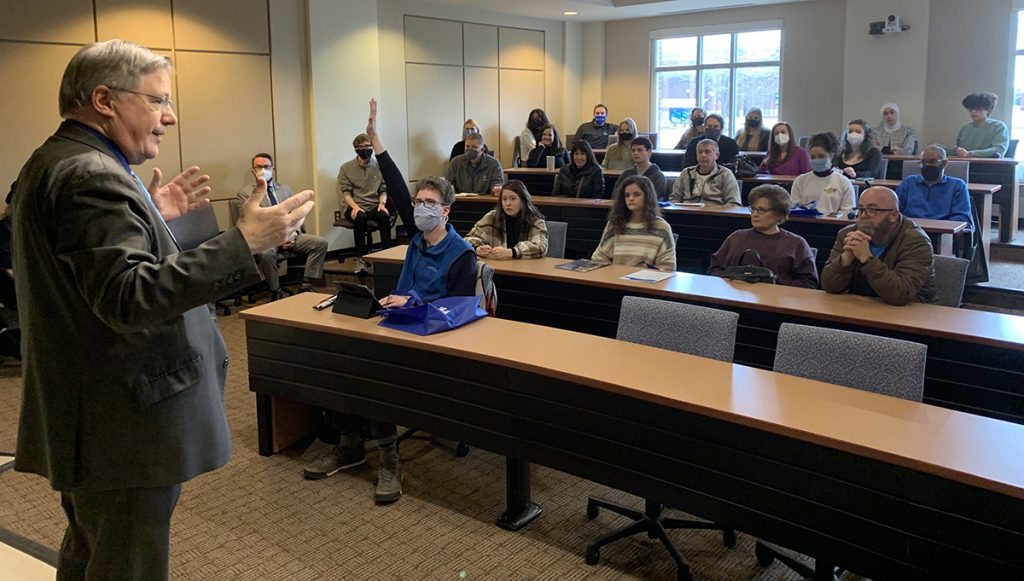 University Honors College Dean John Vile fields questions from those attending the special MTSU event for students who have been offered Buchanan Fellowships, the top scholarship available to a select group of 20 MTSU students by the Honors College. The one-hour session Monday, Feb. 21, in the Paul W. Martin Sr. Honors Building was an opportunity for the prospective students to learn more about the program, the oldest honors college in Tennessee. (MTSU photo by Randy Weiler)

Two Buchanan hopefuls came from Georgia, one from Texas and Connecticut and the rest were from Tennessee, Vile said.

“I think it’s as strong of a group as we’ve had, with lots of quality — musicians, artists, people interested in the natural sciences and athletes,” Vile said. “Typically, they have multiple interests. … Test scores are higher than we’ve ever had before

For the first time, Vile and his staff accepted early applications for Buchanan scholarships.

“We offered it to three people and all took it, so it seems to be working,” he said. 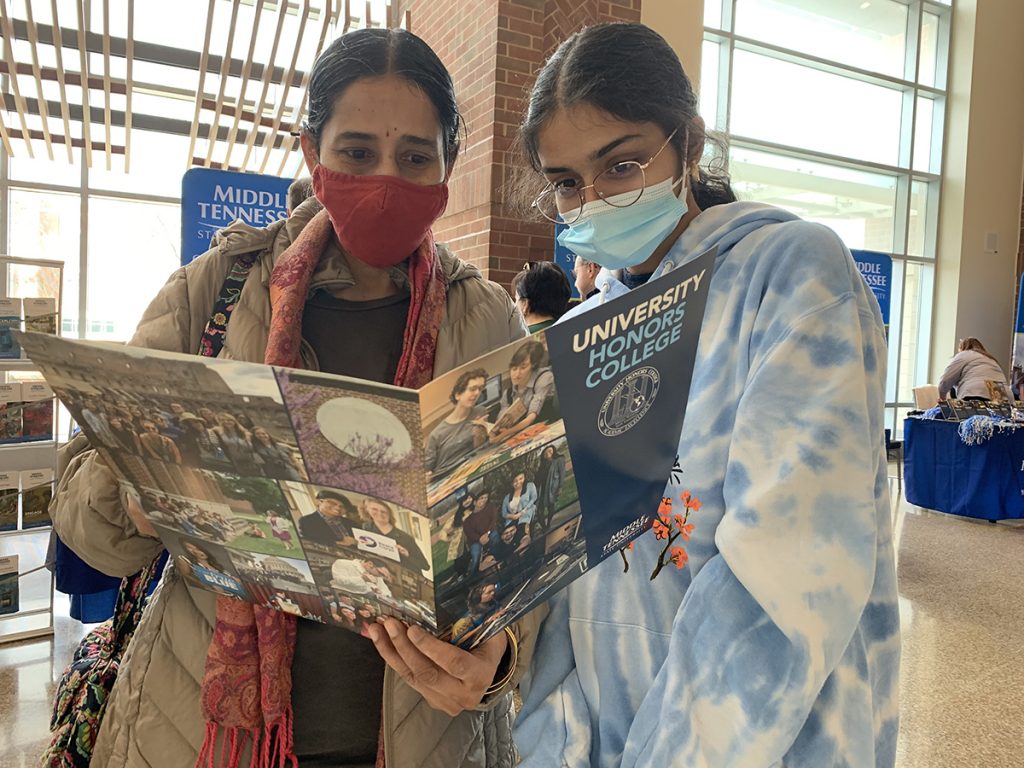 Aparna Arcot and her daughter, Ananya Arcot, of Brentwood, Tenn., browse through an Honors College brochure in the Student Union while visiting MTSU for the annual Presidents Day Open House and Celebration of Scholars Monday, Feb. 21. A Brentwood High School senior, Ananya Arcot said she is undecided on her major, but would like to be a part of the Honors College. (MTSU photo by James Cessna)

Ananya Arcot, 17, of Brentwood, Tennessee, a Brentwood High senior who is undecided on a college major, was among more than six dozen potential students visiting campus — the Student Union and other facilities —  with their high schools was off for the holiday.

Arcot, who previously had visited MTSU one other time, said she likes “that it’s (MTSU) a diverse campus and has a lot of opportunities, and I want to be a part of the Honors College.” She visited along with her mother, Aparna Arcot.

Witherow called it “an amazing day. It was a really nice turnout. I think the students enjoyed it when they came out, and I really know we enjoy having them on campus.

“There’s nothing that seals the deal like seeing the MTSU campus and feeling what a family environment it is. I’m pleased Dr. McPhee invited them to his home. I think that’s really special.” 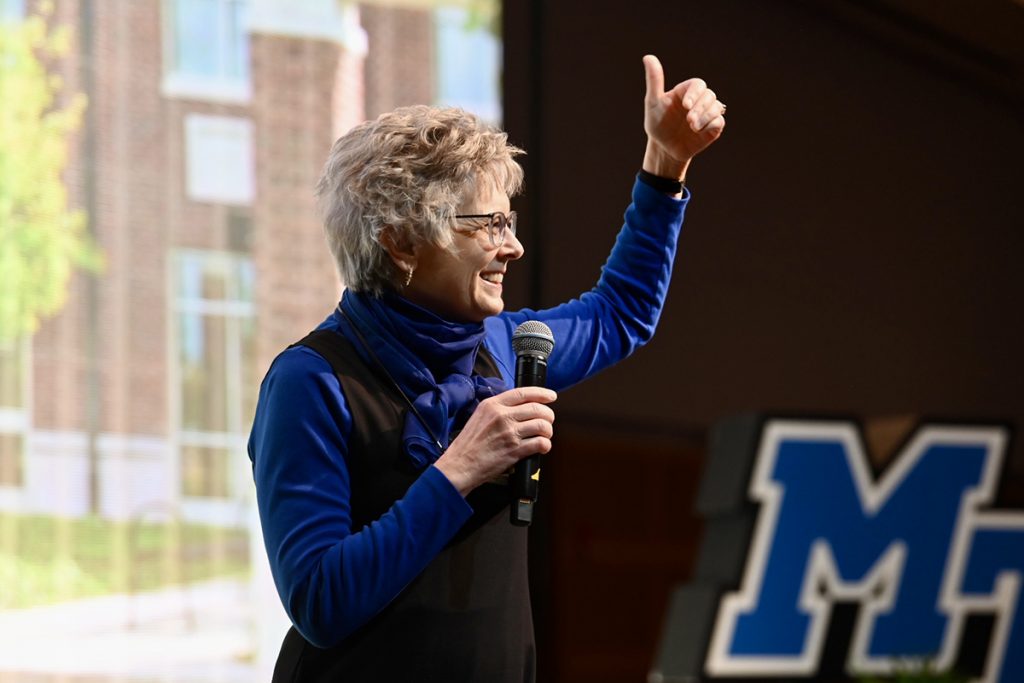 Deb Sells, vice president of Student Affairs and vice provost of Enrollment Management at MTSU, welcomes high school seniors to the Celebration of Scholars Monday, Feb. 21, in the Student Union Ballroom. About 100 students, all of whom have been offered major scholarships, and their parents attended the ceremony hosted by MTSU President Sidney A. McPhee. (MTSU photo by James Cessna)

Destiny Henderson of Murfreesboro wants to be a medical missionary one day. Specifically, a surgeon, performing operations for people with cleft palates or needing amputations. She would become the third generation medical provider in the family, following her mother, Deanna Kolak, and grandmother, Cyndie Beard, both nurse practitioners.

Should all go as planned, Henderson’s plan to become a surgeon will fulfill her dream of a commitment to service. At Providence Christian Academy, she is the community service leader for the Student Council and a member of the National Honor Society and Beta Club. She’s “really excited to get involved in the community here (at MTSU) and bring a new outlet of service in the community.”

Henderson, 17, received and accepted a Presidential Scholarship. She will pursue a premed route — and finally visited the Science Building on Monday, attending with her grandfather, Ronald Beard of Gallatin, Tennessee.

“Oh, it’s beautiful,” she said of the facility. “It will be a great place to study and learn.”

In the Student Union Ballroom, McPhee told the scholarship recipients they are “future leaders. You are going to be doing something in this world. … If you continue on the path you’re on, the sky’s the limit.”

They received a medal from him “as a gift from the university recognizing your outstanding accomplishments and achievements,” he said.

The third-year TEBA Chorale, which is open to students across the university who sing tenor or bass, kicked off the Celebration of Scholars with three musical pieces.

Conductor and School of Music instructor Angela Tipps invited the audience to attend the 7:30 p.m. Tuesday, Feb. 22, SOAL (soprano-alto chorale) concert. It also will be livestreamed on the School of Music YouTube channel.

Upon arrival, each student received a copy of the 2022 summer reading book, “Walking to Listen: 4,000 Miles Across America, One Story at a Time,” by author Andrew Forsthoefel. It is for all new MTSU students. 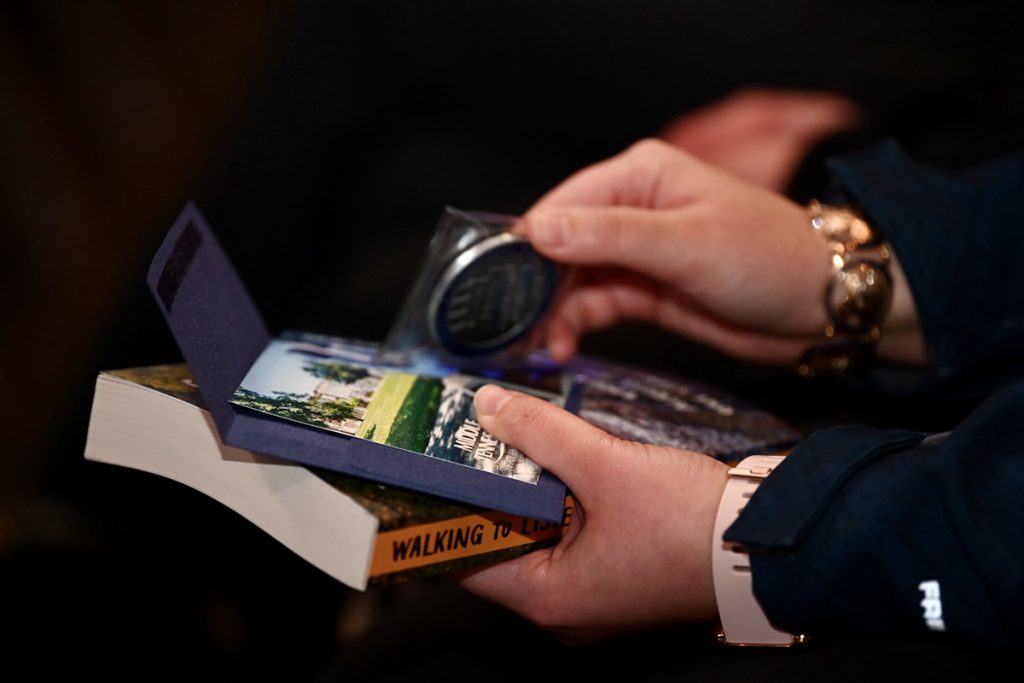 A prospective MTSU student, who has received a major scholarship to attend the university, holds a medal presented by President Sidney A. McPhee and the university for high academic achievement in high school and the Summer Reading Program book, “Walking to Listen: 4,000 MilesAcross America, One Story at a Time,” during the Celebration of Scholars Monday, Feb. 21, in the Student Union Ballroom. (MTSU photo by James Cessna)