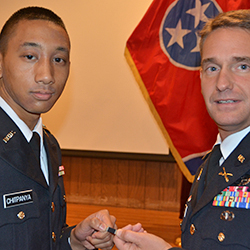 U.S. Army Lt. Col. Joel Miller made a special point of telling cadets attending the MTSU military science program’s fall awards event about one of their peers, Timothy Chitpanya, and his 3.8 grade-point average.

Chitpanya, an MTSU junior from Nashville, earned his high GPA in spring 2014. He topped all the cadets recognized during the military science fall awards ceremony Nov. 20 in Keathley University Center Theater.

“The need to maintain a high GPA demonstrates that intellect is important if they want to be an Army officer,” Miller said.

Several dozen cadets were recognized not only for their academic prowess, but also their physical fitness, leadership and service.

Chitpanya received a ribbon and firm handshake from Miller for earning the Professor of Military Science Academic Award. The cadet is majoring in chemistry, admittedly not the easiest subject to master.

“It takes a lot of time, but it’s really easy for me because I have a passion for chemistry,” Chitpanya said. “I love problem-solving, and chemistry is all problem-solving.”

MTSU junior Timothy Chitpanya, left, displays the ribbon awarded to him by MTSU military science professor Joel Miller Nov. 20 during the fall 2014 awards ceremony in the Keathley University Center Theater. Chitpayna, who is from Nashville, earned a 3.8 GPA in the spring 2014 semester. (MTSU photos by News and Media Relations)

Sophomore Jake West and junior Ethan Hester each received the Warrior Spirit Award, a one-time $1,000 gift to one basic course cadet and one advanced course cadet without regard for either GPA or Army physical fitness test.

Their peers chose West and Hester for their selflessness, responsibility, volunteerism, initiative, confidence, pride in self and organization and ability to lead by example.

Four senior cadets also learned they will become active-duty members of various branches of the Army after commissioning and graduation.

Thirteen cadets will go into various branches of the Army National Guard or reserves following commissioning and graduation.

Military science is one of 11 departments in the College of Basic and Applied Sciences. For more information, call 615-898-2470 or visit www.mtsu.edu/arotc1.