March ‘Out of the Blue’ highli.. 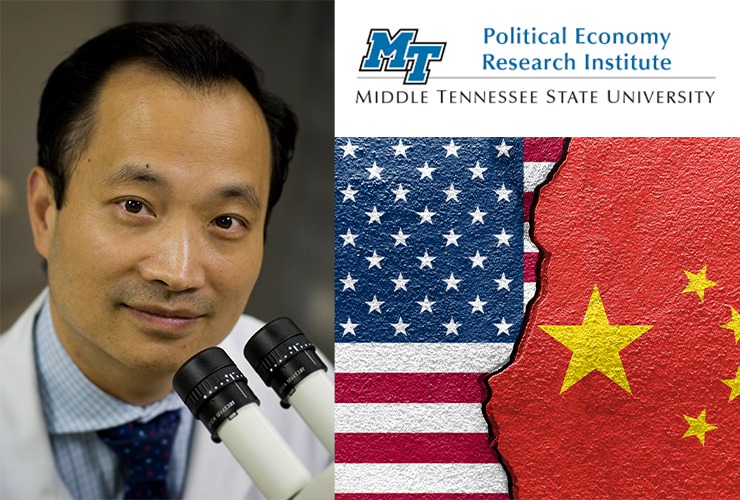 After escaping from China in the wake of the oppressive Cultural Revolution, a world-renowned eye surgeon and philanthropist has dedicated his life to restoring sight for those in need. Now, he now hopes to spread his vision of helping others reach a common ground and provide solutions for a more prosperous and peaceful life.

Dr. Ming Wang of Nashville, Tennessee, will speak at MTSU at 6 p.m. on Thursday, March 24, in Room 106 in the Academic Classroom Building, 1751 MTSU Blvd. The event is presented by the Political Economy Research Institute at MTSU in conjunction with Wang’s Cosmopolitan Initiative Lecture Series. Wang’s lecture will also be livestreamed on the PERI Facebook page.

In this presentation, “Seeking Common Ground in U.S. and China Trade,” Wang will discuss what the United States and China have in common in history, culture, sports, customs, food, economy and religion. He will also analyze the mutually beneficial trade opportunities, especially for Tennessee.

Wang firmly believes that while ideological differences do exist between the world’s No. 1 and No. 2 superpowers, it is in the seeking common ground that we do share, particularly in trade and economic exchange, that will help improve the living standard and quality of lives of people of these two nations.

“We have departed from the principles of free speech and mutual respect and have instead replaced them with intolerance and intimidation. We are becoming a society that is increasingly fixated on our differences, rather than appreciating what we have in common,” says Wang.

As a leading cataract and LASIK eye surgeon and philanthropist, Wang is the founding director of the Nashville-based Wang Vision Institute and co-founder of the nonprofit Common Ground Network.

Wang has received numerous awards, including the Honor Award of the American Academy of Ophthalmology, the Lifetime Achievement Award of the Association of Chinese American Physicians, NPR’s Philanthropist of the Year Award, and Kiwanis Nashvillian of the Year Award for his lifetime dedication to helping blind orphan children from around the world.

The Wang Foundation for Sight Restoration, a charity founded by Wang, has helped patients from over 40 states in the U.S. and 55 countries with all sight restoration surgeries performed free-of-charge. 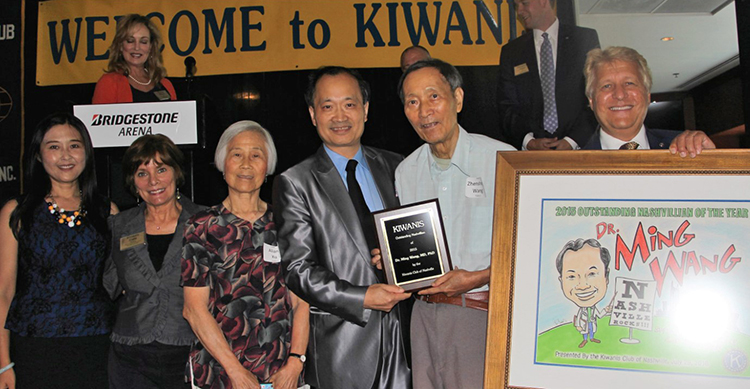 Dr. Ming Wang, center left holding award, accepts the Kiwanis Club of Nashville’s 2015 Outstanding Nashvillian of the Year during a July 2016 at the Bridgestone Arena in Nashville, Tenn. (Photo courtesy of drmingwang.com)

During the 1960s in China, millions of innocent youth were deported to remote areas to face life sentences of poverty and hard labor. While growing up during this time, Wang learned to play the Chinese erhu violin and learned to dance to escape a life in labor camps. He eventually made his way to America to continue his education.

“I stepped off a plane with only $50, a student visa, and a Chinese-English dictionary to my name. I did not know anyone in this country, and I could hardly speak English. I started my journey to becoming an ophthalmologist,” says Wang.

The film “Sight” is based on Wang’s autobiography as an immigrant, “From Darkness to Sight”, co-starring Greg Kinnear. Wang’s journey serves as an inspirational story of how one man turned fear, poverty, persecution and prejudice into healing and love for others. It demonstrates how focus, determination, humility and profound faith can inspire a life that, in turn, impacts the lives of countless others.

“The ability to find common ground in a polarized world is only achieved through years of learning and practice. We must first learn to listen, so that instead of trying to score rhetorical points through well-rehearsed sound bites, we may learn valuable information — even from our opponents — that may propel both sides toward breaking the gridlock which is the hallmark of our current national discourse,” says Wang.

Free food, beverages, and complimentary parking will be available at the event. A campus parking map is available at http://bit.ly/MTSUParking.

Established in late 2016, the PERI, under the direction of MTSU economics professor Daniel J. Smith, is a joint venture between the Jennings A. Jones College of Business and the University Honors College.