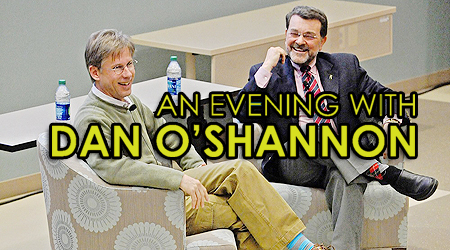 Cross Bob Newhart with Niles Crane and mix in a little Phil Dunphy, and you’ll find the hilarious man who helped put the words in their mouths: Dan O’Shannon.

Speaking April 11 at MTSU as part of the College of Mass Communication’s Tom T. Hall Writer’s Series, O’Shannon is one of the minds behind the smash ABC comedy “Modern Family.”

Along the way, he won Emmys for “Cheers” and “Frasier” and wrote the classic—and literally show-stopping—finale for “Newhart.”

Chatting in the College of Education with longtime pal and fellow Ohioan Dr. Bob Pondillo, an MTSU professor of electronic media communication, O’Shannon shared tales from a 25-plus-year career in comedy as rapid-fire as one of his characters.

“I was not one of these kids who was born funny,” he said to the almost constantly chortling audience. “It actually occurred to me to be funny. I was 8 years old at a school assembly, and … the speaker said, ‘There’s nothing like making people laugh.’

“I suddenly realized that you could decide to make people laugh. It was a huge revelation, a life-changing moment. Then I had to figure out how to be funny.

“Then … oh, YOU MISSED EVERYTHING,” O’Shannon called to a pair of latecomers as they skittered past him to the front row. “First there was the (microphone) feedback, then he (Pondillo) called me a has-been, then I had sweet tea for the first time today, then …”

Deciding to chase his dream to write comedy for television, he fought his way to Hollywood “back in the pre-Internet days” by doing standup in clubs, borrowing a typewriter to write spec scripts, going to meetings that went nowhere and working in the same mall featured in “Fast Times at Ridgemont High” to pay the bills.

“It’s a very sexy idea, following your dreams, but it also doesn’t convey the hours and hours of frustrations and setbacks and times you want to crawl back home,” he explained.

Still, those spec scripts got him noticed. Then he went to work on “Newhart.” Then “Cheers.” Then “Frasier.” Then “Jericho.” Then “Threshold.” Then “Modern Family.”

Audience members peppered O’Shannon with inquiries during a Q-and-A session, seeking his advice on how to get work, how to take criticism, how to improve their craft.

“You need four things to be a writer. First you need talent, yes, but you need more than that,” he explained. “You also need drive and ambition. You have to say yes to yourself when everyone else says no.

“You have to have political savvy … and know how to work with others and when to fight for something and when not to. You have to make your boss happy, or you will not have a job.

“And finally, you have to have luck,” the Emmy- and Golden Globe-winning executive producer and writer said. “If you have just one of these things in spades, you can have a career, but all four will give you a long-term career.”

Sharing a story about a king who challenged suitors for his daughter’s hand by telling them to jump up to her tower, O’Shannon told how the winner leapt one step at a time until he reached the princess.

“What that tells me is ‘impossible goals’ may be made up of smaller, more achievable goals,” he said. “It was crazy of me to think I could go from Painesville, Ohio, to Hollywood and knock on the door of the castle out there and be a writer. But smaller steps … that’s the key.”

O’Shannon also is the author of What Are You Laughing At? A Comprehensive Guide to the Comedic Event, which explains comedy theory. He’s lectured at UCLA and the University of Southern California and taught a course on writing at Cleveland State University, where he holds an honorary doctorate.

His visit to MTSU includes talks with mass communication and English classes and interviews with campus and local media at the college’s new Center for Innovation in Media in the John Bragg Mass Communication Building.

The Tom T. Hall Writers Series in the College of Mass Communication at MTSU celebrates songwriters, authors, poets and screenwriters and offers students, faculty, staff and the public a chance to learn more about the creative process as well as the business end of success.

Watch a video from O’Shannon’s lecture below.