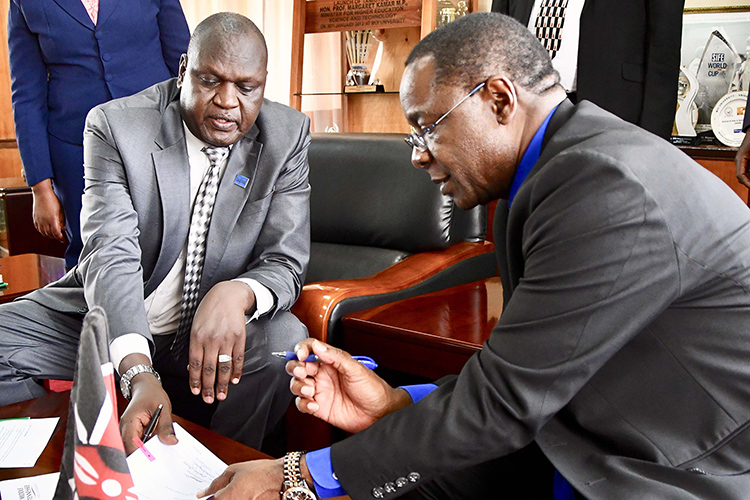 The two leaders signed the agreement during a special meeting of Moi’s faculty senate, which Kosgey called into session to endorse the measure and hear a presentation by McPhee about MTSU’s Department of Aerospace.

“This will be a win-win partnership, a collaboration that will help both institutions and improve the quality of life for the people in both of our countries,” McPhee said.

Said Kosgey, “The Chinese say that a journey of a thousand miles begins with a single step. And we are today taking that first, very important step.”

Moi University in Eldoret, near Kenya’s capital of Nairobi, boasts an enrollment of about 52,000 students. Like MTSU, many of its signature programs are geared to produce ready-to-work graduates in response to industry needs.

Kosgey met McPhee last year at a Confucius Institute meeting in China, a chance encounter that the Moi leader called “divine providence” in his hopes to attract a mentor for his School of Aerospace Sciences.

Moi’s aerospace school was established in 2009 and features departments of flying studies, aviation management, flight training and aviation electronics. It has about 210 students enrolled and has three training aircraft.

In contrast, MTSU’s aerospace department was established in 1943 and features concentrations of aviation management, aerospace technology, flight dispatch, maintenance management, professional pilot and unmanned aircraft systems operations. It has about 700 students enrolled and will fly about 30 training aircraft by the fall. 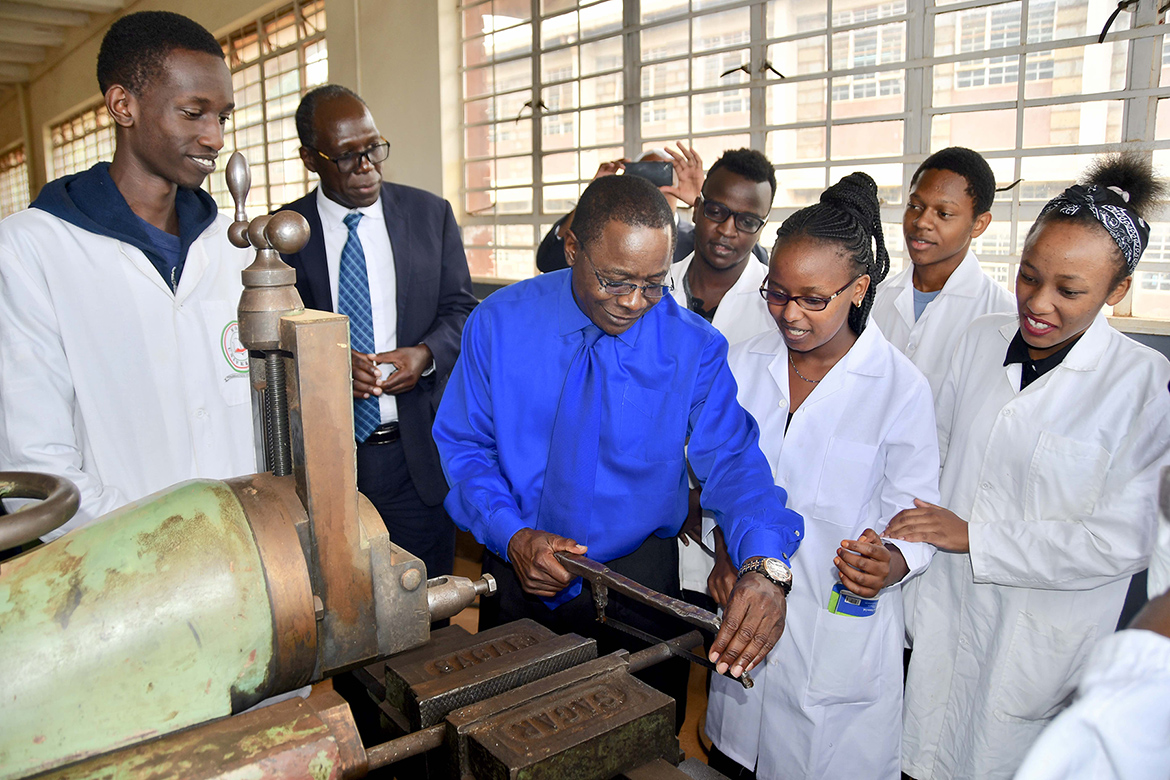 MTSU President Sidney A. McPhee works a hacksaw at an applied engineering laboratory at Moi University in Kenya as students watch. (MTSU photo by Andrew Oppmann)

One such shared challenge, McPhee said, is the global and growing demand for professional pilots. Delta Air Lines, for example, projects it will lose 8,000 of its current pilots over the next 10 years because of mandatory retirements.

“No matter whether you are in Tennessee or Kenya, if you are talking about aerospace education, the words ‘pilot shortage’ will be spoken aloud,” McPhee said.

“This global surge in aviation is creating an insatiable, worldwide demand for pilots,” McPhee said. “And that frenzy is threatening the ability of flight schools, including at MTSU and here at Moi University, to train new ones.

“In other words, the demand is beginning to outstrip our ability to supply new pilots — because instructors are being hired away.”

Kipkorir said he also hopes the partnership will lead to an exchange program to allow Moi students and faculty to come to the Murfreesboro campus.

One Moi University student, Linda Cheruto Tapkokwa, who delivered a presentation on her ambition to become a professional pilot, said she hopes to be among the first to visit MTSU.

“Through the years, sustaining my dream was not easy, as most people around me had a mindset that aviation was no place for women,” she said. “But determination takes you a long way towards success.”

MTSU already has strong ties of a different sort to Kenya, which has been a frequent recruiting stop of MTSU’s track and field and cross country teams. More than 50 Kenyans have run for Coach Dean Hayes over the last four decades. McPhee got cheers from the Moi faculty senate when he showed photos of eight current student athletes from Kenya. 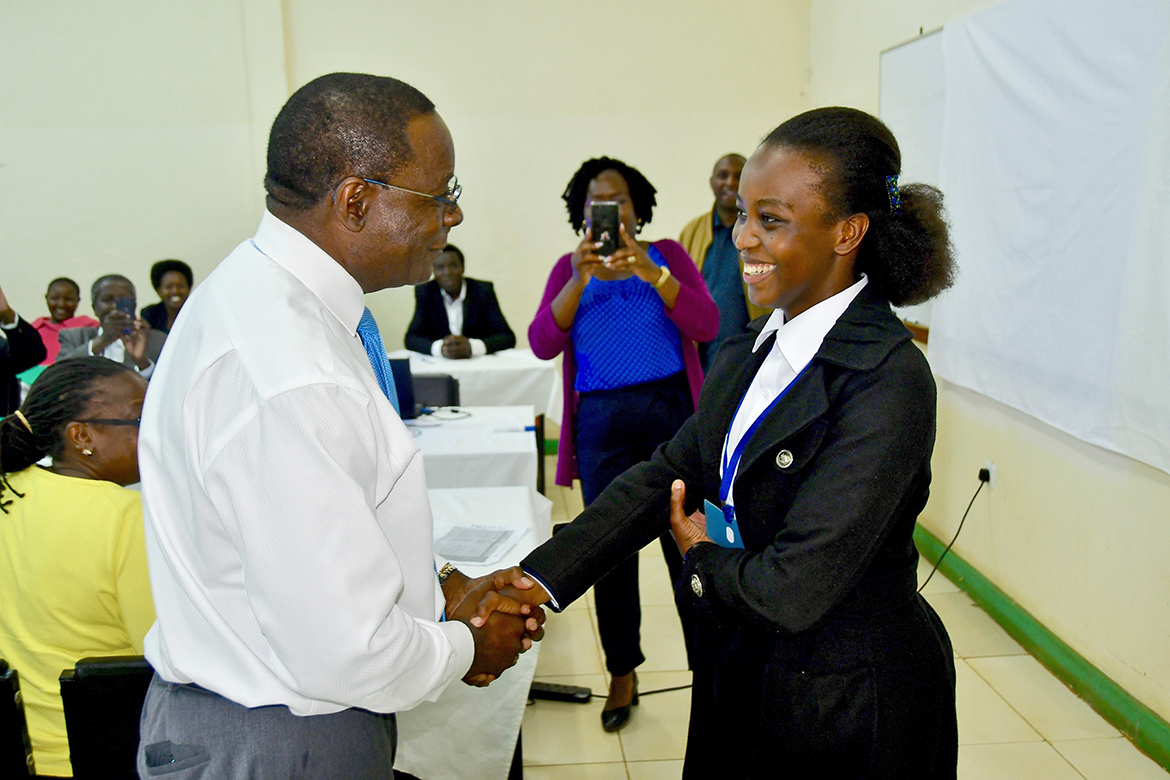 MTSU President Sidney A. McPhee congratulates Moi University student Linda Cheruto Tapkokwa, who delivered a presentation for him on her ambition and work to become a professional pilot through the School of Aerospace Sciences. (MTSU photo by Andrew Oppmann) 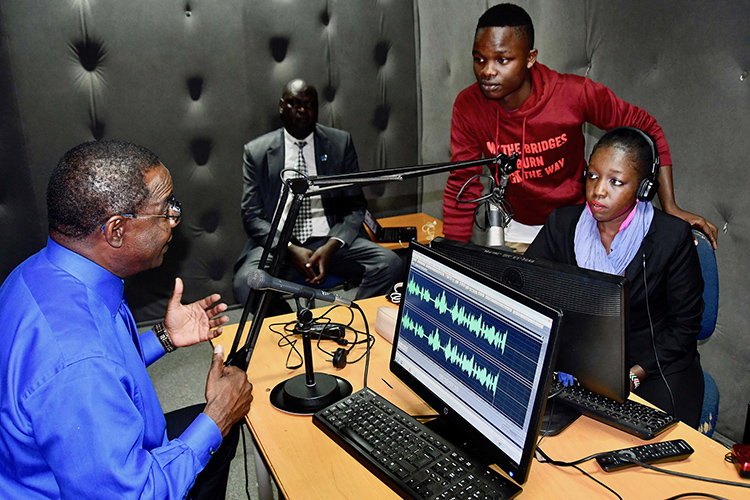 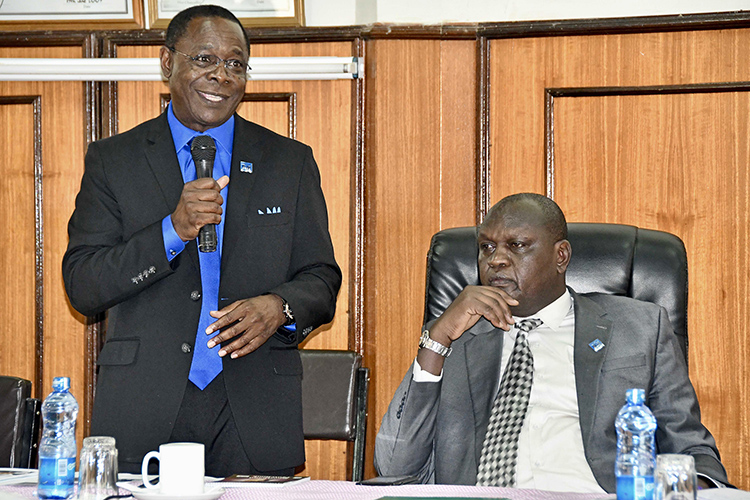