ELDORET, Kenya — Middle Tennessee State University is exploring ways to add a Kenyan institution to its roster of international partners for academic collaboration and as a source for new international students.

MTSU President Sidney A. McPhee spent Saturday, June 22, on the campus of Moi University in Eldoret, outside Kenya’s capital of Nairobi, touring its main campus, conferring with faculty and speaking with students interested in studying abroad.

Moi, with an enrollment of 52,000 students, reached out to MTSU with interest in partnering with programs on the Murfreesboro campus in aerospace, tourism and hospitality management, and journalism and strategic media. 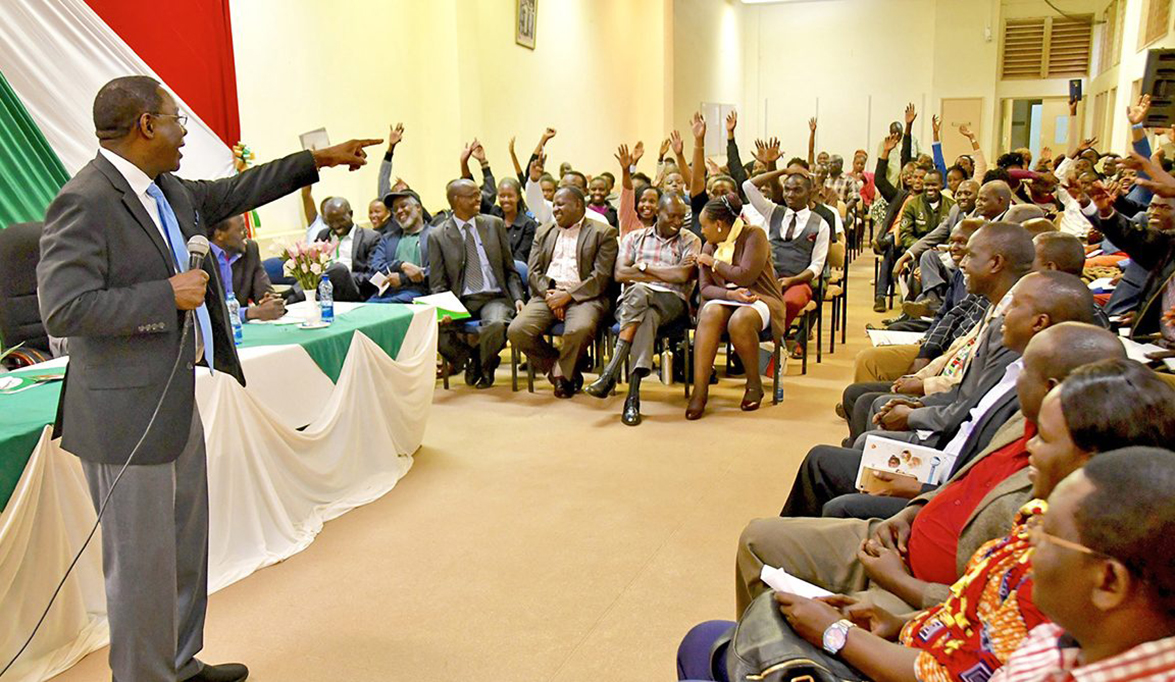 MTSU President Sidney A. McPhee speaks with students at Moi University in Kenya about study-abroad opportunities on the Murfreesboro campus. (MTSU photo by Andrew Oppmann)

McPhee said he was impressed with Moi’s focus on academic enterprises that answer the needs of Kenya’s economy, as well as the enthusiastic welcome put forth by the campus.

“We are alike in our belief that the most effective universities are engaged in the economic development of our respective regions and in the practice of producing ready-to-work graduates,” McPhee said in a lecture during his campus visit.

McPhee was invited to Kenya by Moi’s chief executive officer, Isaac Kosgey, after the two met in China in 2018 at a Confucius Institute meeting in Chengdu.

“I am pleased to welcome our friend, President McPhee, to our campus and hope this visit will put us on a path for future collaboration,” said Kosgey, referencing a formal agreement the leaders plan to sign Monday, June 24.

MTSU, with an international enrollment of about 1,200 among its roughly 22,000 students overall, has made international engagement one of its strategic priorities, with a special emphasis in China.

However, McPhee said it is important for MTSU to expand its reach to countries across the globe. MTSU already has about 40 active international partnerships in countries ranging from Bangladesh to Vietnam.

The two leaders spent most of Saturday focusing primarily on Moi’s School of Tourism, Hospitality and Events Management and its School of Information Sciences, which includes its publishing and media studies majors.

Its information school was established four years after the university’s 1984 founding to address what Moi described as a “great shortage” in professionals to share the stories of the country. 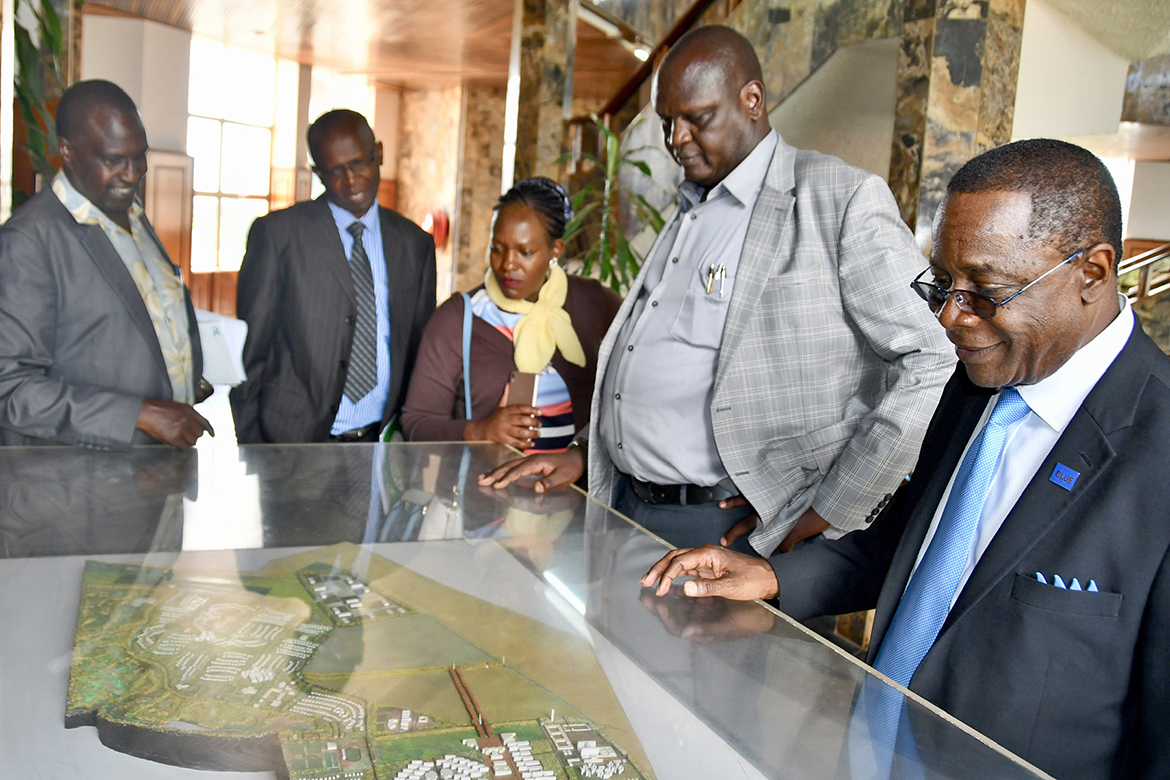 Isaac Kosgey, second from right, chief executive officer of Moi University in Kenya, gives MTSU President Sidney A. McPhee an overview of his campus from a tabletop model. (MTSU photo by Andrew Oppmann)

McPhee, in an overview shared with Moi leaders Saturday, spoke of MTSU’s success in its College of Media and Entertainment in creating real-world learning opportunities for students, such as this month’s work at the Bonnaroo Music and Arts Festival and through its campus television and radio stations.

The MTSU president also told Moi faculty members about the work by the College of Behavioral and Health Sciences in the creation of the new Tourism and Hospitality Management Program, which launches this fall.

McPhee also toured a digital assembly plant on Saturday that’s operated by Moi and overseen by its faculty. The facility, opened last year, has created more than 600 high-tech jobs that put together components for electronic tablets and laptop computers.

Kenyan President Uhuru Kenyatta formally commissioned the plant on Friday. On Saturday, the workers, all trained by Moi faculty, were readying special tablets that the Kenyan government will use during its upcoming population census.

McPhee and Kosgey will turn their focus Monday to Moi’s School of Aerospace Sciences, which hopes to secure MTSU as a mentor in building its pilot training program. 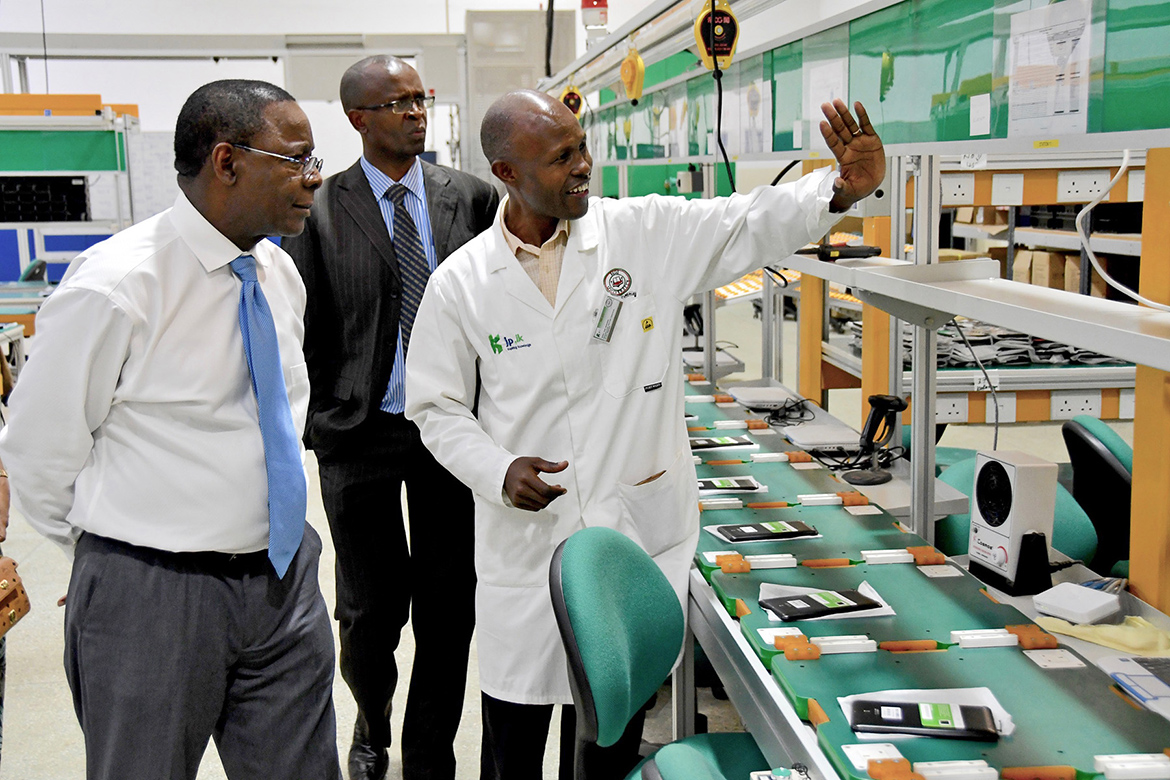 Faculty members from Moi University give MTSU President Sidney A. McPhee, left, a tour of a digital assembly plant that the Kenyan institution operates. (MTSU photo by Andrew Oppmann) 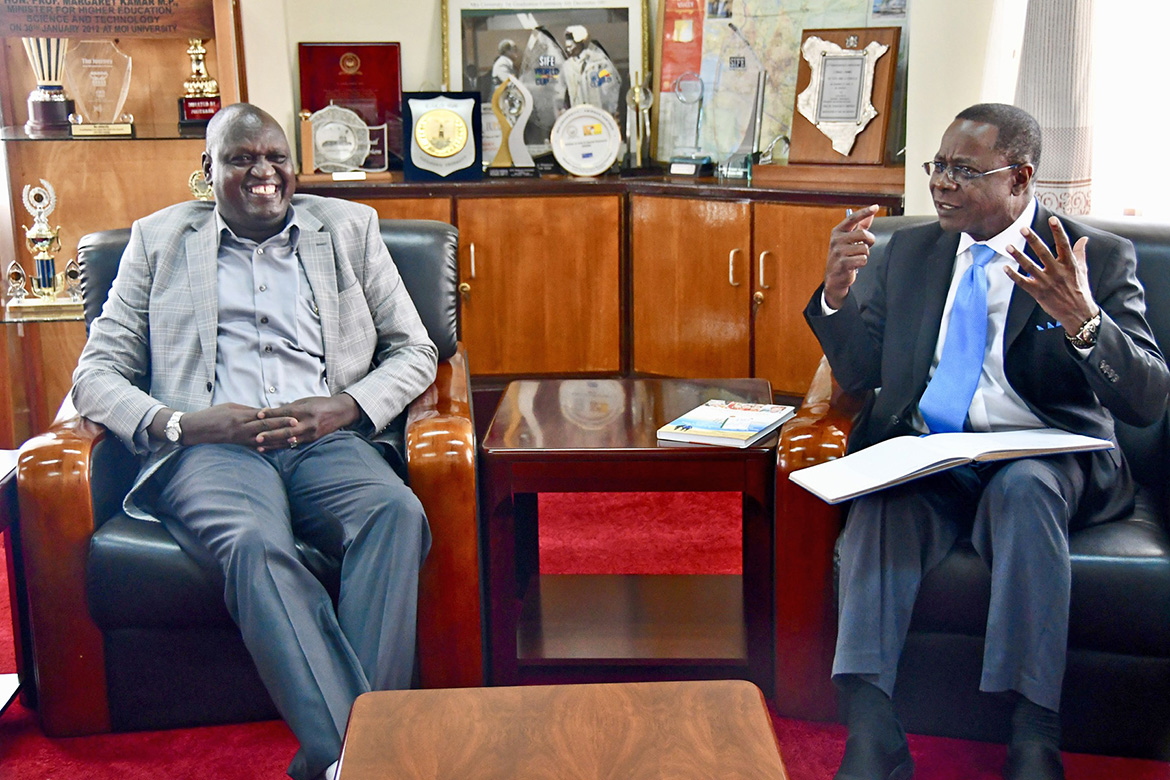 Isaac Kosgey, left, chief executive officer of Moi University in Kenya, welcomes MTSU President Sidney A. McPhee to his campus. The two leaders first met in China in 2018 at a Confucius Institute meeting in Chengdu. (MTSU photo by Andrew Oppmann)