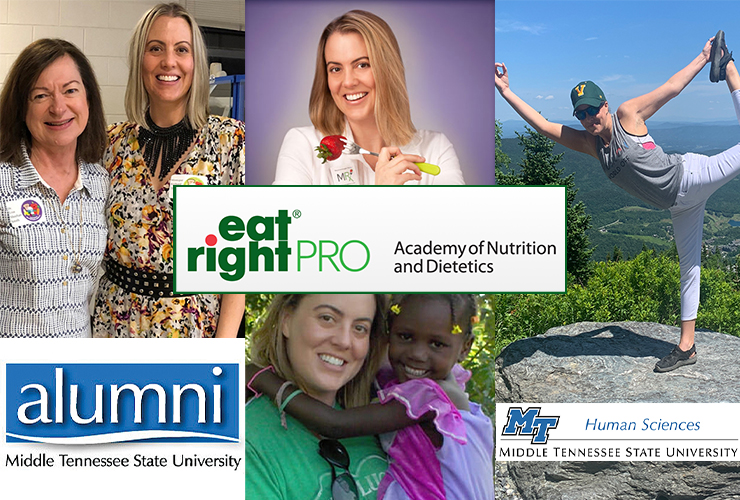 Having packed a lifetime of experience into relatively few years, an MTSU alumna now is telling the entire world what she has learned.

In June, Monique Richard was selected as a spokesperson for the Academy of Nutrition and Dietetics, a Chicago, Illinois-based trade organization claiming to be the world’s largest association of food and nutrition professionals with more than 112,000 members.

“Research is constantly evolving,” Richard said. “Therefore, we’re constantly learning and proving and tweaking. It’s wonderful to have that open dialogue with a bigger audience in many different media platforms.”

Her own interest in the discipline began in 2005 when she was diagnosed with Type 2 diabetes. Unfortunately, she said, she was given lots of medication and no direction.

“Although it runs … in my family, I was very familiar with the disease but not necessarily how to take care of myself because my parents had very well-managed diabetes,” Richard said.

For the practitioners, the academy offers the latest educational, funding, research and career opportunities. Richard says there are dietetics jobs available in sports, oncology, public health, restaurants, manufacturing and, of course, education.

She cites her international experiences as key parts of her time at MTSU. Through the McNair Scholars Program, she presented research in China and India. In Israel, she took part in the American Overseas Dietetic Association’s Regional Conference on the Mediterranean Diet.

Richard also taught nutrition to elementary school children in Egypt. In 2014, she became the first dietitian to join doctors and nurses in relief missions to Haiti sponsored by the nonprofit Azil Foundation.

“Monique Richard truly exemplifies the qualities of an exceptional dietitian through her individualized client-centered nutrition care, the many leadership roles she continues to fulfill in the dietetics profession and the mentoring she provides to dietetics students,” said Lisa Sheehan-Smith, professor emerita and former director of MTSU’s accredited dietetics program.

Today, balancing her academy duties with her own nutrition counseling and consulting service is a matter of practicing what she tells her clients to do, Richard said.

“It’s simply living my life the way that I try to counsel and coach others to do — having a yoga practice on a regular basis, getting out and having some movement in fresh air, eating well, sleeping enough,” she said.

She calls her own practice a “whole person-centered approach,” including nutrigenomics, the study of how an individual’s genes interface with certain nutrients, and the inclusion of what used to be called “alternative medicine,” activities such as yoga, tai chi and acupuncture that now are supported by research.

As a spokesperson, Richard said she intends to try to make research relatable in practical ways across a wide variety of platforms.

“We pride ourselves on being an evidence-based practice,” Richard said. “So we’re always going to look at what the research does tell us.”