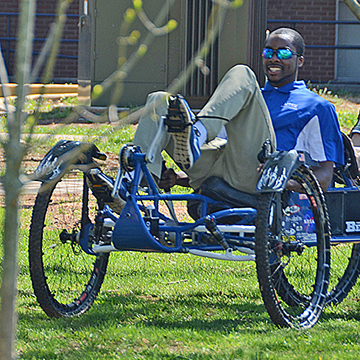 What they brought home — the Neil Armstrong Best Design Award bestowed by judges on the MTSU Team 2 entry nicknamed “The Beast” — may have made a more profound impact on the team at the event.

The April 11-12 event challenged high school, college and university students to design, construct, test and race lightweight, human-powered rovers capable of performing in the demanding environments to be explored by future space voyagers. You can watch a video about MTSU’s participation below.

MTSU President Sidney A. McPhee sent his congratulations to the entire team, saying, “I am proud of this remarkable accomplishment.”

“I’m very pleased we got the best design award,” Miller said. “Only one team (in the university division) receives the design award. That made me very happy.”

The award, which was presented during the awards’ ceremony, is “for outstanding achievement in the design of a human powered exploration rover and contributions toward the next steps in human exploration of the solar system.”

It is named in honor of the late Armstrong, an American astronaut and first person to walk on the moon in 1969 during the Apollo 11 space voyage.

Professor Saeed Foroudastan, who oversees the MTSU Experimental Vehicles Program and serves as a mentor, said it was a well-deserved honor for such a dedicated, hard-working team.

The MTSU moon buggy team is celebrating their win of the 2014 Neil Armstrong Best Design Award in the university division at the recent NASA Human Exploration Rover Challenge in Huntsville, Ala. (Photo submitted)

After a third-place showing in the 2013 race, two MTSU teams placed fifth and 12th overall this year.

“I’m proud of the team,” Miller said. “We had a lot more team spirit and camaraderie.”

Forty-six teams competed in the college and university division.

The competition is designed to teach students to solve practical design and engineering problems and demonstrates NASA’s continuing commitment to inspire new generations of scientists, engineers, technicians and astronauts.

MTSU junior Josh Calvin, left, and graduate student Dianna Prince take the moon buggy nicknamed “The Beast” on a ride through campus before the team departed for the NASA Human Exploration Rover Challenge in Huntsville, Ala. (MTSU photos by News and Media Relations)

MTSU senior Zack Hill, left, of Hendersonville, Tenn., and sophomore Jasmine Johnson of Humboldt, Tenn., perform a timed practice to quickly unfold the moon buggy, reach their seat with both feet in the pedals and lock their seat belts. Viewing the attempt are freshman Alec Urban, far right, and Dr. Saeed Foroudastan, associate dean of the College of Basic and Applied Sciences, who also serves as director of the Experimental Vehicles Program.