MTSU welcomes the season at Sp.. 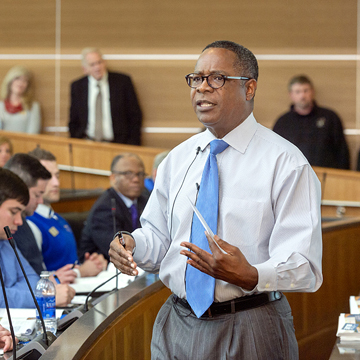 MTSU President Sidney A. McPhee has set a fourth and final town hall meeting to discuss the ongoing Quest for Student Success initiative with the campus community.

The town hall meeting will be held from 2 to 3 p.m. Monday, April 28, in the Parliamentary Room of the Student Union.

It follows three other well-attended town hall gatherings at the same location held earlier in the month.

Launched in the fall, the Quest for Student Success reforms are aimed at helping MTSU students stay on track academically, resulting in more students completing their degrees. The effort is in line with Gov. Bill Haslam’s “Drive to 55” goal to extend the reach of higher education and includes a top-to-bottom review of university operations.

McPhee said he’s holding the town halls to give stakeholders across campus an opportunity to ask questions, give feedback and gain a better understanding of the initiative. An ultimate goal is for MTSU to raise its graduation rate from the current 52 percent to 62 percent by 2020.

“This is everybody’s initiative,” McPhee said. “It’s important to know what role you can play as a member of this university in student success.”

Among the changes being prompted by the initiative:

For more information about the Quest for Student Success, go to www.mtsu.edu/studentsuccess.