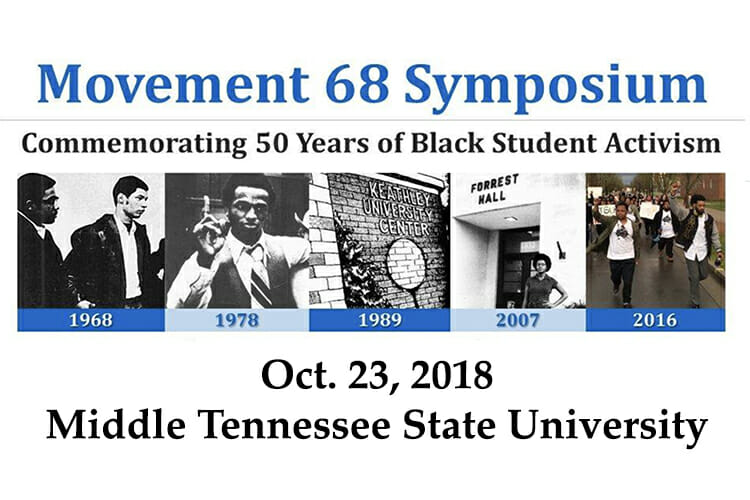 More recent events may be getting publicity, but civil rights activities at MTSU actually span the decades.

Click on the flier to see a larger version.

The event will be broadcast live online on MTSU’s livestream.

This year marks the 50th anniversary of a guest column in the student newspaper, Sidelines, by a student objecting to Confederate symbols on campus. That student was Sylvester Brooks.

“To be honest, upon arrival, I did sense an atmosphere of numbness in this place,” Brooks, a 1970 alumnus, said in a recent interview. “It was as though, in large measure, the campus was in a cocoon, stuck in some antebellum notion of causes lost and seemingly oblivious to the blowing winds of change that would not be denied.”

Brooks said that contemporary efforts such as “Black Lives Matter” and the #MeToo movement, as well as digital communication technology, give him hope for today’s college students.

“We are seeing more and more activism on college campuses, reminiscent of the 1960s, but with enhanced methodology and ability to organize,” Brooks said.

Lae’l Hughes Watkins, university archivist at Ohio’s Kent State University, will deliver the keynote address. She will speak about the role that archivists, curators and others play in documenting marginalized voices.

Watkins is a co-founder of Project STAND, an acronym for Student Activism Now Documented. The online clearinghouse features resources and information on student dissent at colleges and universities, both ongoing and historic. She will also discuss her work with graduate students in MTSU’s Public History Program before her talk.

Following Watkins’ address, there will be a panel discussion featuring, along with Brooks:

Barbara Scales, director of the June Anderson Center for Women and Nontraditional Students, and Sarah Calise, political and regional collections archivist for the Albert Gore Research Center at MTSU, will moderate the discussion.

Calise, lead coordinator on the Movement ’68 project, was a graduate student pursuing a master’s degree during the 2015-16 protests calling for renaming MTSU’s Forrest Hall. Earlier this year, the Tennessee Historical Commission rejected the university’s request to rename Forrest Hall, which houses military science courses, to the Army ROTC building.

“This discussion around Confederate imagery has been happening, at least on this campus specifically, for decades,” Calise said. “There’s a deeper history here.”

She cited the example of a 600-pound medallion featuring Forrest’s image that was installed on the exterior of the Keathley University Center in the 1960s. The student chapter of the NAACP asked then-MTSU President Sam Ingram to take it down in 1989. Ingram did so during the winter break.

“A lot of white people were upset about that for years,” Calise said.

Other issues included fans waving Confederate flags at MTSU football games and the university’s former use of “Dixie” as its official fight song.

Calise is building the Forrest Hall Protest Collection, a digital assemblage of photos, writings and other items, on the James E. Walker Library website. A few artifacts are available at http://digital.mtsu.edu/cdm/landingpage/collection/p15838coll11.

Panel displays with text and images also will be placed around campus in conjunction with the project.

“Movement ’68” sponsors include the Center for Historic Preservation, Distinguished Lecture Committee, the Office of Equity and Compliance, the Office of Intercultural and Diversity Affairs, the MTSU Africana Studies Program, the Department of History, the MTSU Scholars Academy and the Gore Center.