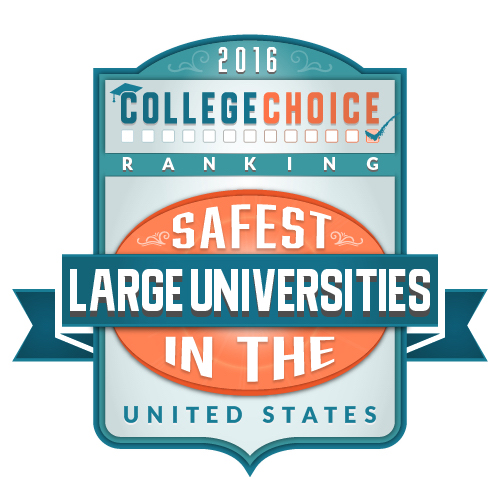 Middle Tennessee State University is ranked among the Top 50 safest large universities in the nation, according to the website collegechoice.net.

According to College Choice, which produces a variety of rankings about colleges and universities for prospective students and their families, the data used to develop the campus safety ranking come the U.S. Department of Education, as well as from the university and colleges’ websites, U.S. News & World Report, and The National Center for Education Statistics.

College Choice defined large colleges and universities as those with 15,000 or more students. See the full rankings list at http://www.collegechoice.net/rankings/safest-large-universities/.

The website states that it used each respective school’s general crime report as well as the number of documented hate crimes, violence against women, arrests made, fire incidences, and discipline enforced activities for each in the last three years. Schools were given a safety grade based on those reports, with MTSU’s grade ranking it 40th on the list.

“From providing RAD self-defense training to auto assistance, student-led patrol, and victim assistance, the safety crew at Middle Tennessee State University (MTSU) works closely with all components of campus life to instill and insure a safe and healthful space,” the website states. “Their core values — honesty and integrity, respect for diversity, engagement in the community, and commitment to nonviolence — have led to MTSU’s recognition as one of the safest large schools in the country.”

Among its numerous safety initiatives, MTSU has a full-time police force of 44 officers that includes a bicycle patrol and community policing; numerous surveillance cameras positioned throughout campus; and a critical notification system to alert the campus community during emergencies.