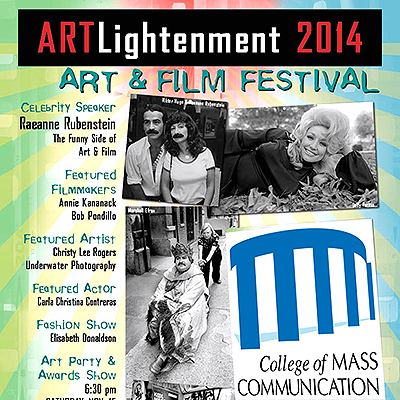 MTSU students and professors are prepared to show off their filmmaking talents at a Nashville festival.

Five motion pictures written, directed and produced by members of the campus community are entered in this year’s Artlightenment Art Show and Film Festival, which is scheduled for Nov. 13-15 at the Celebrity Center, 1130 Eighth Ave. S. in Nashville.

This year’s festival theme is “The Light Side of Art,” and the MTSU entries reflect that sensibility.

Written and directed by Dr. Bob Pondillo, professor emeritus of mass media history and American culture, the 33-minute film tells the story of an assisted living facility resident who feels he has lived an inconsequential life until he has an epiphany on New Year’s Eve.

More than 30 electronic media communication majors on the production degree track, several graduate students from the recording industry master’s degree program and a few recent alumni worked on the project, as well as makeup artists from the Department of Speech and Theatre.

“Coffee,” an animated short by Kevin McNulty, will be shown at 9 p.m. Thursday. McNulty said the four-and-a-half-minute movie is “the ‘true’ story of the lives affected by America’s addiction to coffee.”

“’Coffee’ is about consumerism,” said McNulty. “Most of us don’t really care about where our products come from, be it the clothes on our backs, the electronics we use or even the food we eat.

“We just want them to be cheap, to work properly and to taste good. The film is a satirical look at one such product.”

McNulty is an assistant professor in the Department of Electronic Media Communication. His areas of expertise include digital, stop-motion and traditional animation, as well as motion graphics.

Three student documentaries produced under the supervision of Tom Neff, an associate professor in the Department of Electronic Media Communication and founder of the Documentary Channel, are scheduled to be shown back-to-back starting at 6:30 p.m. Friday, Nov. 14.

All three films were shot during an education-abroad experience in Paris.

“Fighter” captures the essence of Afro-French singer Jara Ezo, whose music and lyrics pack a wallop, and three women who had an impact on her life and career.

Tickets for the complete three-day Artlightenment experience are $15 each and are available at www.artlightenment.com.

The price of admission includes access to all exhibits and workshops, as well as the film festival screenings, closing-night awards and fashion show.