MTSU’s School of Music will welcome a unique jazz group, the Eastern Boundary Quartet, to campus Friday, Nov. 14, at 7:30 p.m. for a free public concert.

The performance is set in Room 173 of the Wright Music Building on the MTSU campus. A searchable campus map with parking notes is available at http://tinyurl.com/MTSUParking14-15.

The music clinic is set from 2 to 4 p.m. in Room 303 of the Saunders Fine Arts Building on campus.

The quartet performs original music created by all its members and has recorded three CDs, including one from a live concert in Brugge, Belgium. You can watch a brief performance from their 2009 U.S. concert tour above.

“The band was formed with the imagination of connecting two worlds of the jazz scene today,” said Stevens, the group’s pianist. “This unique collaboration is a mixture of avant-garde jazz and ethno music from Hungary, like a cultural bridge between the USA and Eastern Europe.” 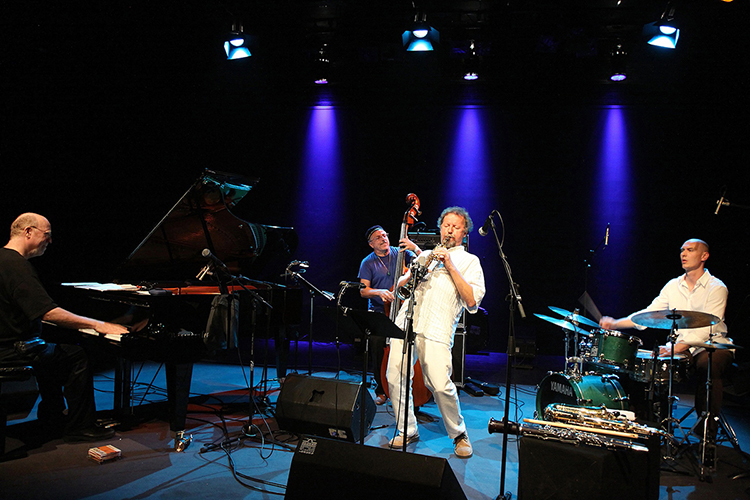 Jazz drummer, composer, music educator and producer Bágyi graduated with honors from the jazz department of the Ferenc Liszt Music Academy in Budapest and has become a respected artist on both his native Hungary’s and the international jazz scene.

Borbély also studied at the Liszt Music Academy and at the Béla Bartók Conservatory, focusing on classical clarinet and jazz saxophone. In addition to his original instruments, Borbély has specialized in playing unusual wind instruments, including the tárogató, folk flutes, kaval, dvojnice, fujara, ocarina, bombard, and zurna.

Fonda, a composer, bassist, recording artist, producer and educator, has collaborated and performed with such artists as Anthony Braxton, Archie Shepp, Lou Donaldson, Bill and Kenny Barron and Perry Robinson.

The Eastern Boundary Quartet is in the midst of its second U.S. tour, which features stops in Virginia and North Carolina as well as Tennessee. You can learn more about the group here.

For more information on this and other concerts in the MTSU School of Music, call 615-898-2493 or visit the “Concert Calendar” at www.mtsumusic.com.