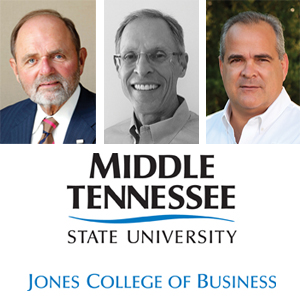 The Jennings A. Jones College of Business at MTSU recently honored three businessmen with achievement awards in advance of the college’s entrepreneurship conference.

Honored at the reception were two MTSU alumni: technology expert Steve Anderson of Nashville and developer Rob Harper of Florida. Banker and philanthropist Jim Ayers, a Parsons, Tennessee, native now living in Nashville, was unable to attend the event and will be presented his award later.

“It is my distinct honor to present these awards to this year’s honorees,” said Dr. David Urban, dean of the Jones College of Business.

“All of them have led lives that we can all be proud of, and I am particularly thrilled to have them associated with the Jones College of Business and Middle Tennessee State University.”

The Jennings A. Jones Champion of Free Enterprise Award is presented to an individual whose achievements are in keeping with the highest traditions of the American system of free enterprise. Award recipients are role models whose business, professional and personal achievements stand out for all to see and to emulate.

Introduced by his parents in rural West Tennessee to the rewards of an honest day’s work, Jim Ayers became one of the state’s most successful businessmen. Ayers nurtured FirstBank from a single branch in Scotts Hill, Tennessee, into the state’s largest independently owned and operated bank, with over $2 billion in assets and over 40 locations. The bank is headquartered in Lexington, Tennessee.

Steve Anderson worked with Accenture for 25 years. As a managing partner for 15 years, Anderson had operating responsibilities for various practice units. With deep manufacturing and supply chain skills, he led large-scale strategic and technology change programs for Fortune 500 companies, receiving national media recognition along the way.

Anderson has a bachelor’s degree from MTSU, an MBA from Jones College and CPIM Certification from the American Production and Inventory Control Society. He works part time mentoring young executives, assisting a consulting firm with strategic industry and client planning, and assisting a small healthcare startup. In recent years he has given presentations to Jones College Information Technology majors. Steve’s wife, Kathy, is a Jones College graduate active in Nashville nonprofits, and their son, Clint, works in Nashville’s healthcare industry.

The Joe M. Rodgers Spirit of America Award is presented to an individual who has demonstrated the highest ideals in keeping with the American spirit of innovation, entrepreneurship, and commitment to others. Award recipients represent what America is, and what it can be.

In 1989, Robert F. “Rob” Harper IV received a bachelor’s degree in business administration from Jones College. In 1991, he established a real estate and development company, Harper Properties, and at 24 opened his first residential home development. He went on to develop numerous other successful commercial, residential and multifamily development projects throughout Florida and acquired, developed and sold a portfolio of Florida commercial warehouse facilities.

In the late 1990s, he invested in agricultural and real estate lands in Florida, South Carolina, Alabama, Mississippi, Tennessee and Georgia. He partnered with Brian G. Philpot to establish Land South Group in 2002, acquiring over 200,000 acres throughout the Southeast. Harper established Bankers South High Yield Fund, originating high-yield lending opportunities in the real estate sector, and AgAmerica Lending, now one of the largest U.S. agricultural lenders. He serves as chair and CEO of Tall Tower Capital, one of the largest U.S. privately owned broadcast tower corporations. A founder in 1997 of Platinum Bank, serving the Central Florida market, he serves on its board of directors.

For more information about the MTSU Jones College of Business, visit www.mtsu.edu/business.